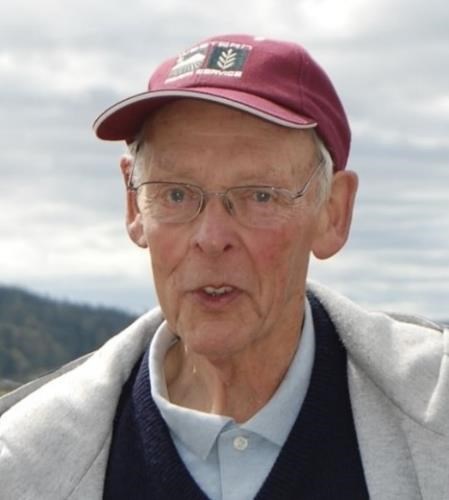 He was born in Melbourne, Australia in 1928 to British parents – Vincent and Alice (nee Corser) Lane. His father died before Richard was born so his mother returned to Derby, England with him. When World War II started he was evacuated to relatives who lived on a Scottish loch. It was on this loch that he learned to sail, and where sailing became a lifelong passion. He married his wife Hazel (nee Hardy) in 1948.

Educated as an engineer, he was employed at Rolls Royce in Derby – in the aircraft division. Because of this job he was recruited by Canadair which was developing a fighter/interceptor for the Royal Canadian Air Force. He emigrated to Montreal in 1956 to work on the Avro Arrow but when the project was cancelled Richard moved to Ottawa to work with Computing Devices of Canada.

A friend of his from his Montreal days had moved to Mountain View, Ca, and in 1960 recruited Richard to work for Fairchild Semiconductors, the company whose engineers were the seeds from which Silicon Valley sprung., Richard moved to Los Altos Ca. and worked in Fairchild's R&D Department for Bob Noyce. As part of his job, he and Andy Grove taught incoming engineers the physics of semiconductors.

After 15 years, and when Fairchild fell on hard times, he moved to California Eastern Laboratories where he first set up and then ran the company's R&D department until he retired.

He was an expert fly fisherman and a member of the Golden Gate Angling and Casting Club, for which he served a term as President. He also enjoyed backpacking and camping trips in the US and Canada. However, his first love was sailing and, upon his retirement he and his wife Hazel began to spend their summers in Port Townsend, where he bought a condo on the waterfront. At first he trailed a Montgomery sailboat up to PT and back every summer, but then he bought a Nonsuch which he moored permanently at PT Marina. After his wife Hazel died in 2004 he moved permanently to PT.

He is survived by his son Martin and daughters Marcia and Amanda and grandchildren Teresa, Andrea, Amanda, Anna and Ursula and 9 great-grandchildren.

A memorial service will be held for him on his birthday, June 13, 2022.
Published by San Francisco Chronicle from Dec. 6 to Dec. 8, 2021.
To plant trees in memory, please visit the Sympathy Store.
MEMORIAL EVENTS
Jun
13
Memorial service
CA
MAKE A DONATION
MEMORIES & CONDOLENCES
0 Entries
Be the first to post a memory or condolences.