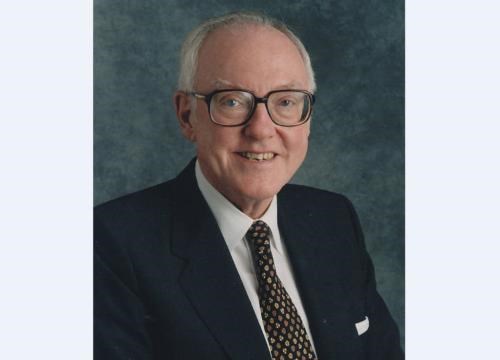 Richard B. Madden, a resident of Ross, California for the past 40+ years, died peacefully at home, surrounded by his loving family on Saturday, June 25, 2016. He is survived by his wife of 58 years, the former Joan Fairbairn; his son John Madden, wife Francesca and their children Brooks and Kendall; daughter Lynne McDonough, husband Paul and sons Conor, Gavin, Luke, and Quinn; daughter Kathryn Pandes, husband John and their children Evan and Caroline; son Andrew Madden, wife Anne and sons Gabriel and Sebastian.

Dick was born in Short Hills, New Jersey and graduated from Princeton University with a BSE degree in 1951. Following his graduation he served in the U.S. Navy from 1951-54 as a LTJG and was head of CINPAC's Political and Economic Intelligence Section. Dick then attended the University of Michigan Law School, where he won Moot Court with his partner, was president of his class, and received his J.D. degree. He met his wife Joan at the University of Michigan and they were married in 1958.

He began his business career with Mobil in New York City while attending NYU at night, receiving his graduate business degree and later teaching there. Early in his 15 years with Mobil, he and his family moved to Rochester, N.Y. where Dick served as President of the Mobil Plastics business and founded Hefty Bags. He was moved back to New York to become Group V.P. of MobiI Chemical and head of the company's Virginia Carolina Chemical Corp. He then was moved into finance and became Assistant Treasurer of Mobil Oil and Chairman of Mobil Oil Estates, Mobil's worldwide real estate business.

In 1971, Dick, Joan and their family moved to Ross, California and Dick became President and Chief Executive Officer of Potlatch Corporation, a Fortune 500 company in the forest products industry. In 1977 he became Chairman and CEO. Dick ran Potlatch for 23 years. The Corporation consistently outperformed the S&P 500 and forest products return on investment indexes throughout this period.

In 1972, Dick joined the Board of the American Enterprise Institute and served there until his death. He was Chairman of AEI for six years in the 1980's. Also, in 1972, Dick joined the San Francisco Symphony Board. He first chaired the long-range planning committee that established the need for a symphony hall and went on from there to chair and serve on many other committees until he retired in 2014 as a Life Governor.

In the 1980's, Dick also served on the Boards of the San Francisco Opera, the Fine Arts Museums Foundation Board and the Board of the San Francisco Foundation. His corporate directorships included URS Corporation, PG&E, Del Monte Corporation, Amfac Corporation and the Bank of California Ltd. During these years, Dick was also on the Board of Directors of Georgetown University, the National Parks Foundation Board, and the Smith-Kettlewell Eye Research Institute, as well as serving as a Senior Advisor to the Boston Consulting Group. In 2013, Island Heritage Corporation published his children's stories "Menehune Tales of Hawaii," which he began while stationed in Hawaii as a young Naval officer.

Dick was a Knight of Malta and, following his retirement from Potlatch in 1994, he became active in the Order of Malta which has as its' purpose serving the sick and the poor. He and his wife, Joan, traveled to Lourdes in France with sick people and other members of the Order for 14 years on the Order's annual pilgrimage. On several occasions other members of their family went, as well. During this period, Dick served as Hospitaller for 6 years, founded the Parish Nurse Program and the Good Samaritan Program, as well as cofounded the Northern California Clinic. He also served as President of the Western Association for another 6 years. He became Vice-Regent of the Order's Sub-Priory of Our Lady of Philermo and was awarded the Grand Cross in Obedience and the Grand Cross of Merit. He often said that the most rewarding aspect of membership in the Order of Malta was helping others in need.

Dick loved sports and travel with his family. At Portsmouth Abbey School, he earned varsity letters in football, basketball and baseball as well as captaining his senior year basketball team. A football injury kept him from participating in college sports. Later in life he played tennis with his wife Joan, and golfed. But fly fishing was his passion, one that he shared with his children and grandchildren, teaching them the fundamentals of the sport. He and Joan traveled to Alaska, New Zealand, and elsewhere in pursuit of the world's best fishing holes, and he became a member of the San Francisco Fly Casting Club, spending many summer days and evenings quietly on the Truckee River fishing for rainbow and brown trout.

Dick's travel with Joan was particularly special to him, and they were fascinated with Asia and the Middle East. In addition, in August of each year, Dick and his family alternated three-week vacations between a western ranch—frequently the A-Bar-A Ranch in Southeastern Wyoming—and travel to other areas in the mainland U.S. and Hawaii, as well as to what his children called their Dad's "educational trips" to Europe.

Dick was a member of the Metropolitan Club in Washington D.C., the Bohemian Club, The Villa Taverna, and Lagunitas Country Club.

With all this, Dick found the time to be a loving husband and father to his family. His wife and children remember fondly his help and advice in projects great and small. He will be sorely missed.

A Mass of Christian Burial will be held at St. Anselm Catholic Church, 97 Shady Lane, Ross, California on Friday, July 8 at 11 a.m.

Donations in Dick's memory can be made to:

Order of Malta - Western Association, USA, 465 California St., Suite 818 San Francisco, CA 94104-1820
Published by San Francisco Chronicle from Jun. 27 to Jul. 3, 2016.
To plant trees in memory, please visit the Sympathy Store.
MEMORIAL EVENTS
Jul
8
Mass of Christian Burial
11:00a.m.
St. Anselm Catholic Church
97 Shady Lane, Ross, CA
MAKE A DONATION
MEMORIES & CONDOLENCES
4 Entries
I just learned of Dick's passing. He was an incredible leader for Potlatch. I will always remember the things I learned from Dick when I worked for him at Potlatch. My thoughts and prayers go out to his famiIy.
God bless you
Terry and Paulette Carter
Terry Carter
July 11, 2016
we just heard of Dick's passing, we have a very heavy heart and know how Joan and their family will miss him. Dick was such a gentleman and when he smiled his eyes smiled too. We will miss seeing you DIck. You accomplished so much in your life and gave so much. love Pauline and Tom
pauline and tom tusher
June 29, 2016
We are so sorry to hear of his passing - he was always larger than life. We will miss him. My condolences to Joan and to the family.
Wendy Reynolds of Bogdan & Frasco LLP
wendy Reynolds
June 28, 2016
Wendy Reynolds
June 28, 2016
Showing 1 - 4 of 4 results