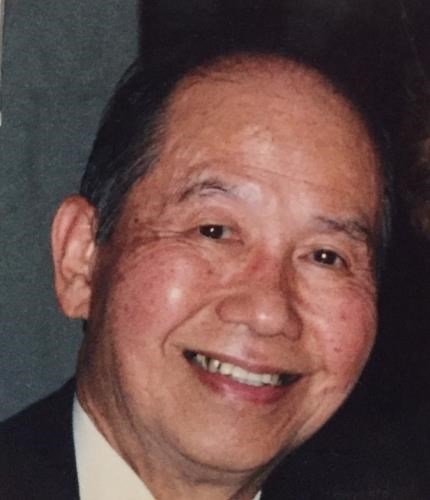 BORN
1921
DIED
2022
FUNERAL HOME
Duggan's Serra Mortuary
500 Westlake Avenue
Daly City, CA
Richard Agco Sarinas
September 1921 - January 2022
Richard Sarinas was born in the Philippine Islands in 1921. In Aug. 1945, he enlisted in the US Navy and served on submarines for most of his career. After his last assignment on the aircraft carrier, the USS Ranger, he was released from Active Duty to Fleet Reserve as Senior Chief Petty Officer in June 1966.
After his career in the US Navy, he was employed by Wells Fargo Bank in the Registered Mail Dept. and retired after 15 years as Operations Supervisor.
Richard met and married Priscilla Akbay, RN, in Honolulu, HI in April 1951. They had two children, Priscilla SA Sarinas, MD, and P Susan Sarinas. Priscilla (Sr) and Priscilla (Jr) preceded him in death in 1921. He is survived by daughter, Susan (Tom Nakashima), and granddaughter, Rosemarie Sarinas-Wong (father, Kim Wong).
Richard and Priscilla were long-time parishioners of the Church of Epiphany in SF and sang in the Choir. They also founded the Filipino Society at the parish. Richard was known for his delicious cooking and flaky apple pies. Richard and Priscilla loved ballroom dancing and they are now dancing together again.
A Funeral Mass will be celebrated on Thursday, January 20th at 11am at Church of the Epiphany, 827 Vienna St., San Francisco. He will be laid to rest with his wife at Holy Cross Cemetery in Colma.

Published by San Francisco Chronicle from Jan. 13 to Jan. 16, 2022.
To plant trees in memory, please visit the Sympathy Store.
MEMORIAL EVENTS
Jan
20
Funeral Mass
11:00a.m.
Church of the Epiphany
827 Vienna St., San Francisco, CA
Funeral services provided by:
Duggan's Serra Mortuary
MAKE A DONATION
MEMORIES & CONDOLENCES
Sponsored by Duggan's Serra Mortuary.
1 Entry
Dear family and friends of Richard´s, On behalf of the United States Submarine Veterans, we offer our sincere condolences at Richard´s passing. Please know that you are in our thoughts and prayers. We are always saddened whenever a fellow "Bubblehead" leaves on Eternal Patrol. He served with honor on the USS Sea Fox SS-402, USS Tilefish SS-307 and USS Bugara SS-331. To our "Brother-of-the-Phin" we say, "Sailor, rest your oar. We have the watch. Fair Winds and Following Seas." Thank you for your service to our country. "May the Lord of peace himself give you peace at all times in every way. The Lord be with you." 2 Thessalonians 3:16 (ESV). Jim Sandman, FTC(SS) Ret. National Chaplain, USSVI.
Jim Sandman
Other
January 14, 2022
Showing 1 - 1 of 1 results