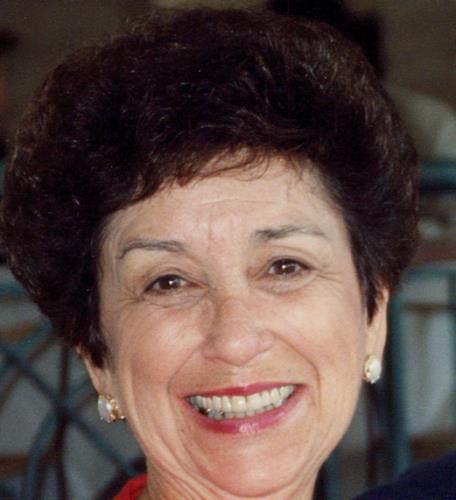 Selma Tandowsky
March 23, 1931 - September 29, 2020
A resident of the Peninsula for 62 years, Selma passed away peacefully on September 29, 2020, at age 89. Selma was a positive, loving, caring, sweet, generous woman, and truly a matriarch. Selma's presence was a gift to those who knew her and she will be forever missed.

Born in Pittsfield, Massachusetts on March 23, 1931, to Anna and Herman Garbowit, she graduated from Pittsfield High School and the University of Massachusetts - Amherst.

In October 1953, Selma, a schoolteacher, met the love of her life, Sanford (Sandy) Tandowsky, at a dance for U.S. Army soldiers in Washington, D.C. They married within 6 months and, 3 weeks later, Sandy was deployed to Korea while Selma remained on the East Coast teaching elementary school. After reuniting a year later, Sandy earned his M.S. in Civil Engineering at Cal Tech before they moved to San Francisco. Even as Selma remained extremely close to her family of origin, she also adopted Sandy's large extended family as her own.

Selma continued teaching school until her three children, son Keith, daughter Joan and son Neal were born. Selma loved being a mother and relished spending her life with Sandy and their family. She provided Sandy with unwavering love and devotion as he started his own Structural Engineering firm. They remained inseparably in love until Sandy passed away in 2016.

As her children grew older, Selma started a new career as a travel agent. This new role was a great adventure that took her on trips all over the world. She loved being with people and leading these trips with her family and friends became a true joy to her.
Selma was immensely proud of her 3 children, their spouses, and her 9 grandchildren and great-granddaughter. Her nine grandchildren still call Cuernavaca Park in Burlingame "Grandma's Park." As she and Sandy experienced every grandchild's milestones, they would tell everyone how lucky they were to have their children and grandchildren living within 15 minutes of one another.
Nothing meant more to Selma than her family and community. For more than 10 years, Selma and Sandy taught reading to grade school students as part of the Jewish Literacy Program. Selma was a long-term member of Peninsula Temple Sholom and served on its board. She was honored for her Women's American ORT work in 1994 and was voted Peninsula Temple Sholom Board Member of the Year in 2000.
Selma was pre-deceased by her loving husband of nearly 62 years, Sandy, and is survived by her proud legacy: children, Keith & Michelle Tandowsky of Burlingame, Joan & Michael Fox of Hillsborough and Neal & Ilana Tandowsky of San Mateo; grandchildren: Adam and Carly Fox, Jared & Lindsey Fox, Ethan and Sara Tandowsky, Jordan, Noah, Blake, Olivia & Meredith Tandowsky and great-granddaughter Sadie Fox. Devoted sister of the late George Garbowit and the late Celia Goodwin. Loving sister-in-law to Eleanor Tandowsky, Evelyn Garbowit, the late Richard Tandowsky and the late James Goodwin. Aunt, cousin and friend to many.

The family is deeply grateful to the loving staff at Sage Eldercare, Mission Hospice, and Angel Haven and Dr. Mary DeMay of UCSF for their care and compassion with Selma over the years.

The family suggests that memorial contributions may be made to Peninsula Temple Sholom, the Bay Area Jewish Healing Center, the Alzheimer's Association or the charity of your choice.

Published by San Francisco Chronicle from Oct. 2 to Oct. 4, 2020.
To plant trees in memory, please visit the Sympathy Store.
MEMORIAL EVENTS
To offer your sympathy during this difficult time, you can now have memorial trees planted in a National Forest in memory of your loved one.
MAKE A DONATION
Please consider a donation as requested by the family.
MEMORIES & CONDOLENCES
1 Entry
To the entire Tandowsky and Fox families, Hal and I want to express our deepest sympathies on the loss of Dear Selma. We spent many hours together years ago when we were roommates in the hospital when we had our "first borns" 15 minutes apart. Our thoughts are with you at this time. Warmly, Vera and Hal Stein
Vera and Hal Stein
Friend
October 4, 2020
Showing 1 - 1 of 1 results