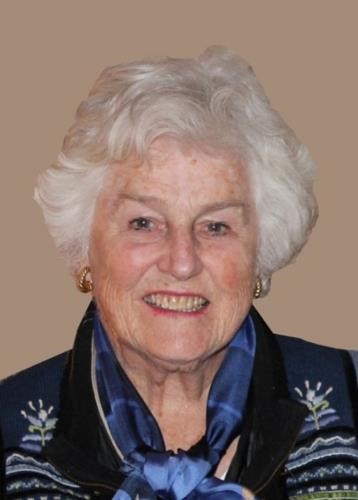 Sheana Wohlford Butler, longtime resident of San Francisco, died peacefully at home after surgery for kidney cancer on June 1, 2016. Sheana was born in Escondido, CA on April 29, 1932 to a citrus and avocado ranching family in North San Diego County. Her mother, Mildred Finley Wohlford, and her father, Burnet Coleman Wohlford, were both graduates of Stanford University. Among other things, Burnet Wohlford was a member of the Board of Directors of Sunkist, the citrus marketing cooperative, and was the founder of the lemon and avocado processing plants in Escondido. He was also Chairman of the board of the Escondido Mutual Water Company. Sheana was educated at Orange Glenn Elementary School and Escondido High School and graduated from a Quaker school in Maine. She graduated from Stanford University in 1953, where she met her husband, Lewis Hanchett ("Lew") Butler and they were married on July 25, 1953 at Mission San Luis Rey. Sheana, Lew and their two young children, Lucy and Lewis, made their home in San Francisco, where Lew practiced law. In 1961, the family set out on a three-year adventure, moving to Kuala Lumpur, Malaysia where Lew would serve as the Peace Corps Director. There, Sheana energetically took on the unique challenges of raising two children in the tropics. She was so admired by the Peace Corps volunteers that several later named their daughters Sheana. Upon their return to San Francisco, their third child, Serra, was born. Sheana joined the board of the Booker T. Washington Community Center and served as the co-chair of the Center's dinner honoring Willie Mays, of San Francisco Giants fame. She also volunteered as a board member and trainer for Enterprise for High School Students, serving at one time as its Chair. In 1969, she and her family moved to the Washington DC area where Lew served as an Assistant Secretary of Health Education and Welfare. Upon returning to San Francisco in 1971, Sheana continued her active work in the community, serving on the boards of the Student Conservation Association (SCA) and the Good Samaritan Family Resource Center in San Francisco's Mission district. Along with her sister Mary Wohlford's Foundation, Sheana supported the founding of Good Samaritan's Wohlford Family Clinic, which to this day serves the family planning needs of the local community. In more recent years she served on the advisory board for the Northern Sierra Partnership, an initiative of the Trust for Public Lands and the Nature Conservancy and was instrumental in the founding of the Latino Community Foundation's Latina Giving Circle initiative, which is now a state-wide philanthropic movement. Sheana was an avid sportswoman, skiing, playing tennis and backpacking in the Sierra with her family. She loved her dogs; on most days, she and Lew could be found walking their Labrador retriever in the Presidio. With her discerning eye and extraordinary skill for floral design, Sheana could make any room sparkle. Perhaps her greatest gift was her remarkable empathy and the way she always put others first. She will be remembered for her kindness, generosity, sense of humor and a radiant smile that made everyone feel welcome and appreciated. Sheana is survived by her husband, Lew; her children, Lucy Butler, Lewis W. Butler, and Serra Butler Simbeck; a brother, Burnet "Tigger" Wohlford; five grand children, one great grandchild, and six nieces and nephews. Her sister, Mary Wohlford, predeceased her in 1999.
Donations in Sheana's name can be made to the Good Samaritan Family Resource Center, 1294 Potrero Ave., San Francisco, CA 94110.

Published by San Francisco Chronicle from Jun. 15 to Jun. 21, 2016.
To plant trees in memory, please visit the Sympathy Store.
MEMORIAL EVENTS
To offer your sympathy during this difficult time, you can now have memorial trees planted in a National Forest in memory of your loved one.
MAKE A DONATION
MEMORIES & CONDOLENCES
3 Entries
I am so glad that in Sheana's obituary, her empathy, kindness, and putting others first was mentioned.

Many years ago I re-designed the Butler garden, and during my time working with Sheana, I was continually impressed by her reverence for people of all types, treating everyone with exceptional respect, kindness, and appreciation. Sheana radiated her own sunny spirit to everyone around her, and in her presence you knew you had been blessed by an extraordinary individual.

My sincere condolences to Lew, their family and friends.
Josephine Zeitlin
August 12, 2017
I feel so thankful and happy to have had the chance to
live for some months with the Butlers.... With my little and amazing sister Serra, Sheana and Lewis.... How beautiful and wonderful they were!!!! Sheana every single day was so happy and active with a great sense of humor..... I am sorry I never told her how deep was my thankfulness to her!!!!!
From my heart Sheana thank you so much fot those wonderful moments with you! I will always keep you in my heart!
Beatriz Esesarte
June 20, 2016
As member of the Peace Corps group that Sheana trained with in DeKalb in 1961 before going to Malaya I will always remember her kindness and her ability to make everyone laugh with her directness and sense of humor. Within the first week of training all the men were in love with her and all the women regarded her as a role model. I came to realize that being a mother to her own family and a "Den Mother" to a growing number of PC Volunteers was the most difficult job anyone could have and yet Sheana out-performed every Volunteer then, or since. Truly a remarkable person who shall always be remembered...and missed.
Bob Rourke
June 16, 2016
Showing 1 - 3 of 3 results