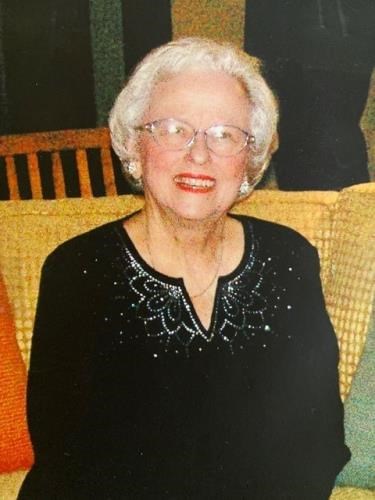 Sylvia Snow Elliott, a 60 year resident of the peninsula, peacefully passed away at the Sequoias Retirement Community on Monday, October 7th 2019.
She was born in Los Angeles and grew up in the Hollywood Hills as the only child of Norman and Carlotta Snow. She attended Hollywood High School where her favorite memories were of going to Palladium on Catalina Island to hear Frank Sinatra and Benny Goodman. She was chosen as class valedictorian in 1942, and addressed the graduating student body at the Hollywood Bowl.
She modeled swim suits and was offered screen tests in Hollywood, but her dream was to go to Stanford. She started Stanford in 1942 and lived in Roble Hall. The summer before starting at Stanford, her father took her to the Beverly Hills Hotel to swim. It was there that she met Roy Westly, who was a B-24 bomber pilot in the US Army Air Corps. She later said "was the most handsome man she had ever met". After just one quarter at Stanford she dropped out to marry him in Las Vegas on December 24, 1942.
On January 16th, 1944, Sylvia had her first child, Karen, on an air force base in Dyersburg, TN. After moving over twenty times in 1940s and 50's, the family settled in Menlo Park area in 1957. She gave birth to three children, Karen, Dean and Steven, all of whom attended Menlo Atherton High School. Sylvia was passionate about reading, movies and art history and worked as a docent at Stanford's Cantor Art Museum for 23 years. She married Goodwin "Bud" Elliott who was a pediatrician at Sequoia hospital in 1978.
Sylvia and Bud moved in the Sequoias retirement home in Portola Valley a few years later where she lived for the last 22 years. Everyone who met her said "she is the happiest, most positive person I ever met".
She is survived by three children and nine grandchildren.

There will be a short Celebration of Life service in Parlor 1 at the Sequoia's Retirement Community at 501 Portola Rd. in Portola Valley on Sunday October 20th from 3:00 to 5:00 PM. We respectfully ask people to consider contributing to either the Menlo Church (formerly the Menlo Presbyterian Church) or the Cantor Art Museum at Stanford in lieu of flowers.