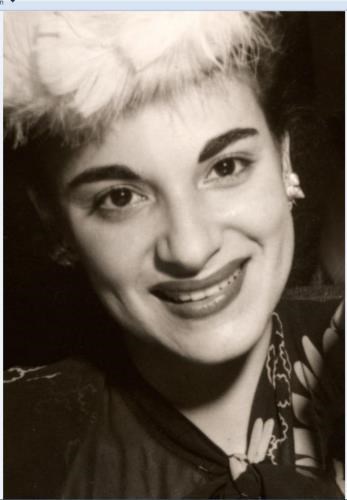 Temme was born in Chicago, Illinois, a first-generation American whose parents, Esther Breiger (née Brindel) and Joshua Breiger, a custom tailor, emigrated from Russia at the ages of three and fifteen, respectively. Her younger brother, Boris Breiger, died in 2009.

Although a product of the Great Depression, Temme often recounted a childhood that, while short on material goods, was rich with music, dance, books, and afternoons spent wandering the Art Institute of Chicago, where she was awarded a scholarship to pursue a course in drawing. (She also liked to remind her children that she often walked ten blocks through the snow to get to school, a fact rewarded with an eye roll by her Los Angeleno offspring.)

When Temme was thirteen—a fiery beauty with black hair and dark brown eyes —she met her future husband, Carl Henry Karpf, at a summer resort in Glenn, Michigan (the so-called Catskills of the Midwest). As the story goes, he planted a kiss on her lips, she responded with a slap to his face, and he retorted, "I will marry you someday!"—a prophetic beginning to a love story that lasted up to—and after—Carl's death in 2001, albeit one punctuated with plenty of fireworks. Not surprisingly, two of Carl and Temme's favorite pieces of music were the Liebestod from "Tristan und Isolde" and Mahler's Second Symphony.

Temme accompanied Carl to Muskogee, Oklahoma, where he was stationed as an army doctor during World War II and where their first son Gregory Karpf (an educator, who resides in North Hollywood) was born. After the war, they settled in Los Angeles, and had three more children: David Karpf, a physician living in Mountain View with his partner, Teresa Beyer; Jonathan Karpf, an anthropology professor living in San Jose with his wife, Kathleen Zaretsky; and Deborah Bishop, a writer, who lives in San Francisco with her husband, Michael Lieberman, and their fourteen-year-old twins, Wes and Sasha Lieberman. Both Temme and Carl were also devoted grandparents to their older grandchildren, Megan Karpf (26) and Josh Karpf (23), who both live in Santa Clara.

Often described as a 'force of nature' for her passionate opinions, Temme was a prolific reader who steeped herself in subjects ranging from mythology to history to archeology. She often ruefully commented that her children had made it to Europe before she did, but once she and Carl started travelling abroad she more than made up for lost time, visiting all of the places she had heretofore only read about, flirting with the locals (one still remembers "Bruno,") and navigating foreign cities like a native.

Temme was also a social activist who volunteered for many organizations and political causes, to which she often opened up her home— one of her children's greatest memories was meeting people such as Julian Bond and Sister Corita Kent before being sent to bed. Temme read books for the blind, tutored reading to disadvantaged children, was a cub scout den mother, a longtime president of the PTA, and active in the sisterhood of Temple Beth Hillel. Temme also volunteered for many years at Cedars Sinai Medical Center, where Carl had admitting privileges, and where she was a beloved presence on the pediatric ward well into her eighties.

One of Temme's prized possessions was a silver pin of a shoe with a hole in the sole that she wore as a volunteer for the Adlai Stevenson campaign, just the first of many political campaigns to which she donated her time. Throughout her life, Temme was also an outspoken supporter of civil rights, rights for farm workers, reproductive rights for women, and LGBT equality, and she was a fiercely vocal opponent to the war in Vietnam. With Carl, she was a supporter of the arts (they were regulars at the Music Center and the Hollywood Bowl), and they once memorably hosted both the great cellist Gregor Piatigorsky, who played his cello in their living room with the orange shag carpet, and Alan Ginsberg, who did a reading of his poem, "Kaddish."

Temme remained sharp, outspoken, and engaged until the age of 90, when the effects of dementia began to dim her wit and intellect. As her family likes to joke, the only silver lining is that she remained blissfully unaware of the election of Donald Trump, the news of which might very likely have killed her.

A memorial service for Temme will be held in the near future. In lieu of flowers, donations in Temme's name may be made to Planned Parenthood Federation of America: 1-800-798-7092, or by mail to: PPFA, P.O. Box 97166, Washington, DC 20090-7166; or online at www.plannedparenthood.org.
Published by San Francisco Chronicle from Jan. 14 to Jan. 22, 2017.
To plant trees in memory, please visit the Sympathy Store.
MEMORIAL EVENTS
To offer your sympathy during this difficult time, you can now have memorial trees planted in a National Forest in memory of your loved one.
MAKE A DONATION
MEMORIES & CONDOLENCES
7 Entries
Temme was a loving aunt to my brother, sister and me, a loving and caring sister to my father, and sister-in-law to my mother. I have fond memories of visiting her and my cousins in Los Angeles and seeing her in Seattle. May good memories begin to bring comfort to her children. May her memory be a blessing.
David Breiger
March 12, 2017
I am Temme's nephew...she was a supportive, loving aunt who gave to others in a kind and compassionate way. Her life was a blessing.
marek breiger
February 15, 2017
Temme was a sister of the heart to me.She welcomed me into her life when Her brother,Boris, and I married in 1950. May her memory be a blessing.
Florence Breiger
February 14, 2017
marek breiger
February 11, 2017
I am Temme's cousin, Bernice Weinstein Duboe's daughter, Phyllis Weinstein's niece. Phyllis lives with me in San Diego. We were sorry to learn about Temme's passing. We send our sincere condolences to you. I didn't know about all of her activism, but I was pleased and proud to read about it. As I attended the Women's March in Washington, DC on January 21st, I thought about her and that it was good she doesn't have to s what's happening in this country politically. Please let us know when her memorial service will be. We would like to come up for it, if we can. We would like to see the twins, Greg and Deborah. It has been a really long time.
Robin Duboe Seigle
Family
February 6, 2017
My deepest condolences to family and friends. Wishing that all find peace that brings comfort, courage to face the days ahead, and loving memories to forever hold in your hands. May God continue to comfort you all. (Psalm 9:9,10)
Jessica
January 19, 2017
She sounds great. I wish I could thank her for her activism. So sorry for your loss.
January 15, 2017
Showing 1 - 7 of 7 results