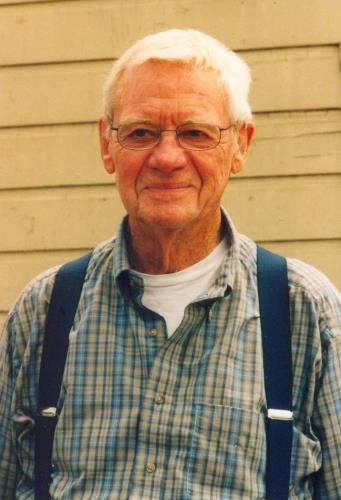 Ted died peacefully at home on October 15, 2020 at the age of 94. He grew up in Piedmont, CA surrounded by his parents, a bevy of doting aunts, and a grandfather whom he loved and adored. He left high school early to serve in the US Merchant Marines in WWII. After the war he attended UC Berkeley, where he met his beloved wife-to-be, Elizabeth Ward, and immediately fell in love with the entire Ward clan. Liz and Ted celebrated their 71st anniversary earlier this year.
During a brief period of work in hardwood lumber sales, Ted developed a love of wood and carpentry that lasted his lifetime. He later enjoyed a career in the stock market and investment counseling in San Francisco for 41 years.
After raising four daughters in Mill Valley, Ted and Liz retired to a rural life in Sonoma County, where he reveled in raising chickens, mending gates & fences, and hardcore puttering.  After 30 years in Forestville they returned to Marin County in 2017.
As an only child, Ted valued his friendships immensely.  He maintained life-long relationships with his childhood buddies and made close friendships throughout his entire life.  He shared his insatiable sense of humor with everyone he knew.
Ted is survived by his beloved wife Elizabeth, his daughters Terry (Doane), Barbara, Patricia (Helge), and Liza, five grandchildren (their spouses), and 15 great grandchildren.
A celebration of his life will be held when it is safe for family and friends to gather.  Donations in Ted's memory may be made to The Special Olympics, Save the Redwoods League, or The Leukemia & Lymphoma Society.
Published by San Francisco Chronicle from Oct. 17 to Oct. 20, 2020.
To plant trees in memory, please visit the Sympathy Store.
MEMORIAL EVENTS
To offer your sympathy during this difficult time, you can now have memorial trees planted in a National Forest in memory of your loved one.
MAKE A DONATION
Please consider a donation as requested by the family.
MEMORIES & CONDOLENCES
0 Entries
Be the first to post a memory or condolences.