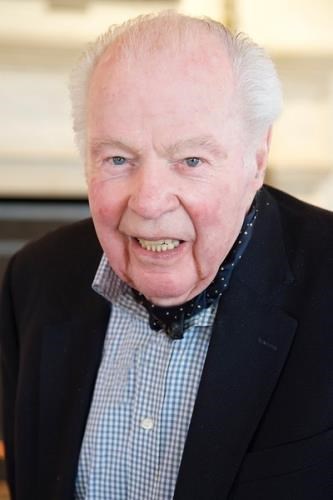 Thomas John Cooney passed away peacefully on December 7 in Boise at the age of 98 surrounded by loved ones. He is survived by his niece Elizabeth Cooney Derrico (Daniel) and their sons Ryan and John; and nephew Thomas Cooney (Jill) and their two sons Brian and Christopher. He was preceded in death by the love of his life, Joan Chapman Cooney, and his brother John Cooney and John's wife, Rita.

A native of Yonkers, N.Y., Tom attended Sacred Heart Grammar School in Yonkers, Manhattan Preparatory School in the Bronx and the University of Notre Dame in South Bend. He graduated from Notre Dame University in December of '42 and immediately joined the US Navy. He was sent to Officer Candidate School at Dartmouth College and Princeton University. Once in the field, Tom served on landing craft in North Africa and in Italy at the Battle of Salerno after which friends jokingly referred to him as the "Liberator of the Isle of Capri." Following the Italy landings, Tom sailed to England and made a D-Day landing at Omaha Beach, Normandy. His last tour of duty was the ammunition depot at Port Chicago, CA. He was awarded an honorable discharge at the rank of full lieutenant. There were many things for which Tom could be proud in his long life, but none touched him quite like the November day in 2018 when the French government awarded him the Legion of Honor for his service aboard the Bougainville in San Francisco Bay.

After the Navy Tom became a Special Agent with the Federal Bureau of Investigation and served in several field offices, including Richland, WA and Los Angeles, CA. After five years with the FBI, Tom worked at LeMode, Ltd, a family-owned department store in Idaho. Two years later, he signed on with JW Robinson in Los Angeles and later with The White House in San Francisco. When he left The White House and until his retirement, he worked as a clothing manufacturer's representative.

In addition to the honor of serving as a Knight of the Grand Cross Order of the Holy Sepulcher of Jerusalem, Tom enjoyed the camaraderie found at the Arid Club in Boise; the Olympic and Metropolitan Clubs in San Francisco; and the Royal Sylvan Beach Yacht Club in McCall, Idaho. Tom learned to fly small planes for enjoyment and he and Joan enjoyed cruising the waters of San Francisco Bay and the Sacramento Delta on their motorboat.

Tom's faith and his bride were his fortune. The moment he met Joan Chapman of Boise, Idaho, he knew he'd found his life partner. They were married September 8th, 1948, in St. John's Cathedral, Boise. Drawn both to the city and country lifestyles, they split their time between San Francisco and Idaho, with many happy summers spent at their cabin on a stream leading to Lake Payette in McCall, Idaho. Ever in each other's company, Tom and Joan traveled the globe several times over. They decorated their home with the art and culture of the places they'd been and always departed with a deep appreciation for the people and customs of our world.

We only get one shot at life, and Tom Cooney made the most of his. He earned an excellent education, chose a perfect life partner, practiced what he preached, forged deep friendships, and left the world a better place than when he arrived. Even though he and Joan had no children to call their own, there are many among us who looked up to him as a father. Thank you for modeling a life well-lived, Tom. You are loved and will be missed.

A funeral Mass will be said at 2 p.m. Saturday, January 18, at St. John's Cathedral, 807 N 8th St, Boise, Idaho 83702. Donations are suggested to the Asian Art Museum in San Francisco or a charity of your choice.

Published by San Francisco Chronicle from Jan. 3 to Jan. 5, 2020.
To plant trees in memory, please visit the Sympathy Store.
MEMORIAL EVENTS
Jan
18
Funeral Mass
2:00p.m.
St. John's Cathedral
807 N 8th St, Boise, ID
Funeral services provided by:
Summers Funeral Home
MAKE A DONATION
Please consider a donation as requested by the family.
MEMORIES & CONDOLENCES
Sponsored by Summers Funeral Home Boise Chapel.
6 Entries
I've known Tom my entire 61 years. He helped me in ways of education and Catholicism that words cannot do justice. I will be eternally grateful. Lawrence G. Sirhall, Jr.
January 9, 2020
Thank you, Tom, for sharing your experience, strength and hope with so many. May the Lord bless you and keep you.
Fr. Philip Garcia, OFM
January 7, 2020
Rest in peace Tom. It was a pleasure to have known you.
John Stokes
January 7, 2020
A lovely, generous man.
Kay Hummel
January 4, 2020
One of the finest men I have ever known; I was honored to be one of his many friends....
Bill Cassidy
January 4, 2020
A man of honor.
Fr Donald Fraser
January 3, 2020
Showing 1 - 6 of 6 results