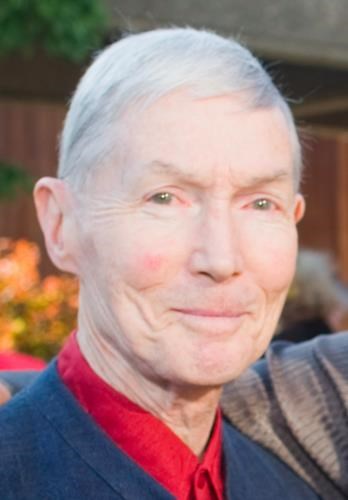 A soft-spoken sage with a twinkling sense of humor and a zenlike spirit of modesty, quiet spirituality, and deep communion with nature, Anderson was born in Salt Lake City in 1928 and grew up in Oakland, California.
As a child, he studied piano and orchestration. He started a USO company while in high school, and toured the Bay Area as its accompanist.
At 18, he enrolled in classes at San Francisco Ballet School and with Tatiana Svetlanova and Dorothy Pring in Berkeley, then moved to New York, to study with some of America's leading ballet teachers, among them Pavlova's partner, Aubrey Hitchins. He danced in several musicals, including Call Me Madam, on Broadway and in the national tour, and performed with Ruth St. Denis and Ted Shawn at Carnegie Hall.
Anderson found his mentor in one of Martha Graham's leading soloists, May O'Donnell, at whose studio, he met Frank Shawl. Both men joined O'Donnell's dance company. In 1958, they opened The Shawl-Anderson Dance Center in Berkeley, and in 1962, they founded the Shawl-Anderson Dance Company, which enjoyed a 14-year run. Anderson's legacy lives on at Shawl-Anderson, which remains one of the Bay Area's most vital centers for dance training, residencies and performance.
Anderson is the son of Stewart "Andy" Anderson (deceased) and Arlene Edwards Turner (deceased), and the stepson of Robert B. Turner, Sr. (deceased). He is survived by brothers Bob Turner (Ann) of Pleasanton and Keene Turner of Sonoma; sister Darlene Turner Quigg (Tom) of Sausalito; cousins Arthur Edwards of Placerville, Danny Edwards of Utah, and thirteen nieces and nephews.
A memorial is planned for March 9, 2017 from 4-8pm at the Brazilian Room in Tilden Park. Donations may be made to the Victor Anderson Scholarship Fund at Shawl-Anderson Dance Center, www.shawl-anderson.org.
Published by San Francisco Chronicle from Feb. 13 to Feb. 14, 2017.
To plant trees in memory, please visit the Sympathy Store.
MEMORIAL EVENTS
Mar
9
Memorial service
4:00p.m. - 8:00p.m.
Brazilian Room in Tilden Park
CA
MAKE A DONATION
MEMORIES & CONDOLENCES
3 Entries
I am so sorry for your loss. Victor was an inspiration to me. May his memory be a blessing to us all.
Rita Ruderman
March 5, 2017
My deepest condolences for your loss. Please find peace and comfort in knowing God cares for you and will help you in your time of need. Jeremiah 29:12 "you will call me and come and pray to me and I will listen to you."
February 15, 2017
MAY THE THOUGHT OF KNOWING THAT FRIENDS AND FAMILY SHARE IN YOUR GRIEF BE OF COMFORT TO YOUR FAMILY.PLEASE READ PROV 17:17
KELLEY
February 14, 2017
Showing 1 - 3 of 3 results