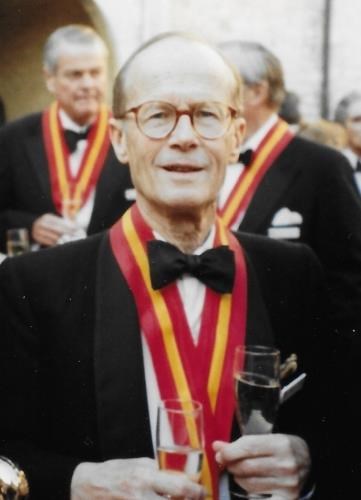 Warren attended the Punahou School in Honolulu, Hawaii while his step-father, Richard Walker, was stationed with the US Navy. After Pearl Harbor was attacked in 1941, Warren returned to San Francisco, with his mother and brother Richard W. Walker, and attended Town School for Boys. He was then sent East to attend Middlesex School in Concord, MA for High School. He felt the call of duty and enlisted in the Army and was stationed in Northern Italy for a year. Upon completion of his military service, he entered Harvard College and graduated in 1952 with a BA in Government. While at Harvard he was the coxswain of an undefeated crew and a member of the Fly Club.

After Harvard he returned to San Francisco to begin his business career. Warren formed a group of investors that bought, renovated and managed apartment buildings in Northern California and Arizona.

Warren was an avid skier in The Sugar Bowl and also in St. Anton am Arlberg, Austria. There he met his first wife Monika Hunt. Warren was truly the happiest skiing with friends in St. Anton and later in Whistler, BC. He was Trustee Emeritus at The Hamlin School, and later was on the board of Town School for 6 years. He was a quiet observer, but provided powerful ideas and solutions. He was the co-founder and Grand Sénéchal of the Chevalier du Tastevin San Francisco chapter and also on the board of the Burlingame Country Club and the Pacific Union Club. He was a passionate traveler. He traveled to all ends of the world, and many of these adventures were taken with his late wife of 18 years Claire Clark.

Warren's dry sense of humor, daily political analysis and wise counsel will be greatly missed, but forever celebrated and remembered by all that he touched. He was a mentor to many and a great friend to all that knew him near and far. He was sharp and poignant to the very last minute, always with an insightful opinion.

Warren is survived by his daughter Antonia H. Cohen, his brother Richard Walker and his grandchildren, who he loved dearly, Philippa and Maximilian Cohen.

Due to Covid-19, a celebration of life will be planned at a later date. In lieu of flowers, please consider making a gift in honor of Warren H. Clark to the University of California, San Francisco supporting cancer research. To make a gift, visit makeagift.ucsf.edu/cancer, or mail in a check donation to the Cancer Research fund, made payable to "UCSF Foundation," to UCSF Foundation, PO Box 45339, San Francisco, CA 94145.

Published by San Francisco Chronicle from Feb. 12 to Feb. 14, 2021.
To plant trees in memory, please visit the Sympathy Store.
MEMORIAL EVENTS
To offer your sympathy during this difficult time, you can now have memorial trees planted in a National Forest in memory of your loved one.
MAKE A DONATION
MEMORIES & CONDOLENCES
1 Entry
I was so sorry to hear of Warren's passing and we want to express our most sincere sympathies to you and the family during this difficult time from the management team here at BLVD Residential. Warren was a respected client of our team and the effects of his passing are already being felt here.

I've had the honor of serving Warren when Joy is out of the office. It was fun and always entertaining specially when the conversation is regarding income taxes and politics.

Please accept my sincere condolences for you and the family. He will be greatly missed and everyone here is saddened by his death. Know that our thoughts and prayers are with you and your family during this difficult time.