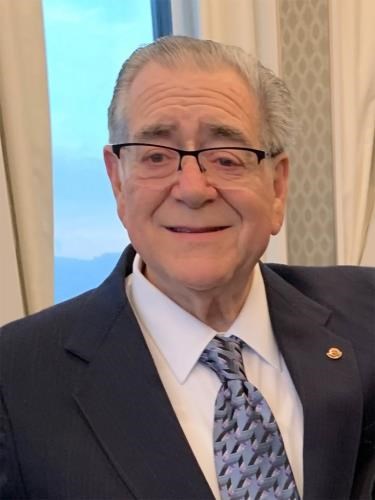 BORN
1943
DIED
2021
UPCOMING SERVICE
Celebration of Life
Jan, 28 2022
the Italian Athletic Club
Send Flowers
Warren Joseph Spiegel
Jan 27, 1943 - Nov 27, 2021
It is with great sadness that we announce the passing of Warren Joseph Spiegel. Warren passed peacefully on November 27, surrounded by his beloved family: his wife of 56 years, Zodine; his children, Jeffrey, Lynnet and Philip; his daughter in law, Maria; grandson, Timothy and of course, Auntie Marlynn.

A native San Franciscan, Warren grew up in the Sunset district and attended Parkside Elementary, A.P. Giannini Jr. High, Lincoln High School and San Francisco State University. The pivotal moment of his academic career came at SF State where he met the love of his life, Zodine, in 1963. Warren knew a good thing when he saw it and in 1965 at St. Peter and Paul Church, Warren and Zodine were married.

Warren spent his career in the financial district working for Wakefern Food Corp, a job he loved. He started his day swimming at the Olympic Club and finished it at the dinner table with his family. Quite simply, Warren was the ultimate family man. A devoted husband, Warren not only embraced Zodine but the entire Lancelotti family and his in-laws, the Pellegrini family, who proudly made him an honorary "Spiegelini." He coached all of his kids' teams with virtually zero expertise, he worked on antique cars with Jeffrey, took Lynnet to see Michael Jackson, took Philip to baseball card conventions, and froze his tail off with ALL of them at Candlestick Park more times that anyone can count.

Warren was a straight shooter. He was fair, honest (sometimes too honest!), and no one had to guess where he stood. He proudly supported his father-in-law, Henry Lancelotti, and joined the Salesians Boys' and Girls' Club board. He was president of the Foodsters to support his career, and he spent 30 years supporting his wife as a major contributor to St. Thomas More School and parish. The consistent word here is support — Warren was always there to provide it.

Fun. Warren knew how to do that too. Whether it was working on his antique car collection, fishing in Mexico with his friends and family, or manning the grill at the 49er tailgates, he made sure he did it right. Although Warren has passed, the "Wow, remember the Model-T?" or, "That fish was soooo big!" and "What is in that BBQ sauce?" stories will always be with us. As his life progressed, swimming and bike riding turned to gardening and walking his dog Lulu. Busy weeks in New York turned into serene Napa weekends. Grilling for a 40 person tailgate turned into grilling for his family. But for all the changes, his boundless love and dedication to his family remained his north star. Warren was and is a hero to his family. That is his legacy.

There will be a celebration of his life on January 28th, 2022 (the day after his birthday) at the Italian Athletic Club. In lieu of flowers send donations to the Salesian Boys' and Girls' Club, 680 Filbert St, San Francisco, CA 94133.
Published by San Francisco Chronicle from Dec. 3 to Dec. 5, 2021.
To plant trees in memory, please visit the Sympathy Store.
MEMORIAL EVENTS
Jan
28
Celebration of Life
the Italian Athletic Club
CA
MAKE A DONATION
MEMORIES & CONDOLENCES
4 Entries
I had the good fortune to work with Warren for many years. Warren's work was most important to him. He was honest, ethical, and really got results. At the same time, Warren always put his family first. I'm very sad to hear of his passing, and happy to have known Warren. Sending many prayers and much love to Warren's family.
Frank Rostan
Work
December 12, 2021
Our families deepest sympathy to Zodine and the family on Warrens passing. I have wonderful memories of visiting Warren in SF. Warren was always a special friend and business associate of our family for over 40 years. He will be missed by us but never forgotten. My son still has the Wakefern Truck model that Warren gave to me for him over 30 years ago in his room. Our prayers and sympathy to the family.
Gerald Chooljian
Friend
December 6, 2021
My condolences to the Spiegel family. Warren was always such a fun person to be around. I enjoyed the time I spent with Warren and the family. My love and prayers always to Zodine and the entire family.
Andrew Serrano
December 5, 2021
What a beautifully written tribute to Uncle Warren. 49ers games, special parties and amazing food and wine will always be in our memories. We love and will miss him with all of our hearts.
Michael Pellegrini Family
Family
December 3, 2021
Showing 1 - 4 of 4 results