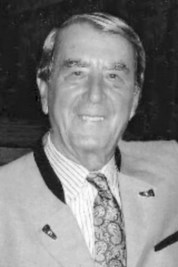 Wilhelm Ludwig Kriessmann (Willi) passed peacefully at his home in Hillsborough on December 18, 2012. A series of strokes over the past 6 months proved too much even for his indomitable spirit to overcome. He was 93.
Willi was born October 11, 1919 in the small town of Feistritz in the province of Kaernten, southern Austria. He grew up the son of a school headmaster with his now deceased younger sisters Trude and Gerti. Willi spent his youth exploring the natural wonders of the mountainous landscape and later was enrolled in secondary school for future teachers in the provincial capital of Klagenfurt.
In 1939, at the age of 18, he joined the German Luftwaffe after the Anschluss of Austria in 1938. From 1939 to 1945, he flew 93 combat missions as a bomber pilot in the campaign against the Soviet Union. Willi flew nearly every major Luftwaffe aircraft in other reconnaissance and ferrying missions, including the Arado Blitz Bomber, the first operational jet bomber.
Immediately after the war he earned a Ph.D. in political science from the University of Graz. After several years of being involved with burgeoning import/export efforts of the Austrian government in Vienna, he was appointed Trade Commissioner for the U.S. West Coast in 1953, which led to his eventual move to California.
Willi was part of the Austrian delegation at the 1960 Squaw Valley Winter Olympics which created the famed "Austria Haus". This launched his career in the nascent ski industry in the U.S. His endeavors over the next several decades included the Anglo Scandinavian Corporation, Blizzard Ski and Kitex.
As coach of the Hot Spurs dynasty, which began with the youth soccer explosion in the mid-1970s, Willi influenced hundreds of boys who came through the AYSO system. Following the professional European leagues was a passion of his up to the end.
Willi traveled throughout the world, always documenting the experience with stories, mementos and photos, long before scrapbooking became mainstream. His interests in history and culture, classical music and crosswords were rivaled by few. In more recent years he turned to writing, publishing many articles and features in German-American periodicals. Memoirs of his childhood in Austria were published in 2009.
Willi was an avid sportsman, with a special fondness for the ski slopes, long biking trips with his crew, and tennis at Harvard on the Hill.
He is survived by Gail, his wife of 45 years, his daughters Brigitte and Liz, his sons Walter and Marc, and six grandchildren; all residing in the San Francisco Bay Area.
A memorial will be held in early 2013, location to be determined.
Published by San Francisco Chronicle from Dec. 22 to Dec. 23, 2012.
To plant trees in memory, please visit the Sympathy Store.
MEMORIAL EVENTS
To offer your sympathy during this difficult time, you can now have memorial trees planted in a National Forest in memory of your loved one.
MAKE A DONATION
MEMORIES & CONDOLENCES
4 Entries
Our hearts go out to you dear Gail and the entire beautiful Kriessmann family ! Willi was like a father to me as his love for Austria and family history was equal to my father Hermans, as well as mine. He translated my Grandfather Peter Kraighers diary written in typical Carinthian dialect long-hand German from 1907. He also translated many documents of important Kraigher history. He graciously invited my parents and I to visit San Francisco and took us to many beautiful sights there. His uplifting ,positive , fun-filled spirit will live on in in our hearts.
Forever Grateful ,
Pamela and the USA Kraigher family
Pamela Kraigher
January 3, 2013
I am very glad and fortunate to have met you and Gail. I will always look back fondly on that time. Fly high and long Willi, mein guter Freund. Ed
Edward Stuczko
December 27, 2012
Dear Willi, R.I.P. we will miss you... a long and distant friend from Innsbruck / San Francisco,

Toni Fuchs
Anton Fuchs
December 23, 2012
Our mentor and roll model - he will always be with us--- in the mountains snow or shine
Much love to the family
John and Lori Wortley
December 23, 2012
Showing 1 - 4 of 4 results