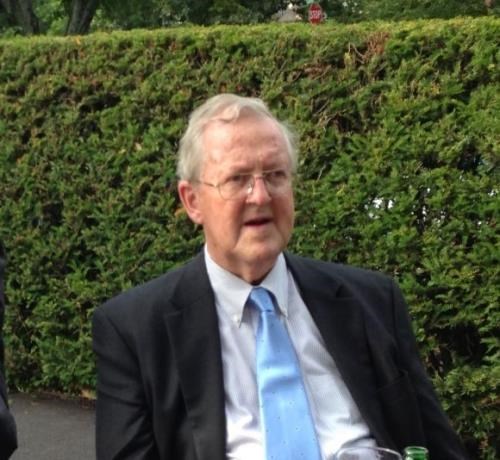 BORN
1940
DIED
2021
William Joseph O'Connor
November 12, 1940 - June 12, 2021
Bill passed away peacefully on June 12th at the age of 80 after a prolonged illness. He is survived by his wife Gay (Martin), sons Jeremiah and Eric and his beloved dog, Izzy. He also leaves behind his brothers Peter, Michael and Charles, sisters Kathleen, Maura, Margaret and Dorothy and his stepmother, Ann. He was predeceased by his parents Jeremiah W. O'Connor and Marjorie Quigley O'Connor and siblings Jeremiah, Paul, Joseph and Christopher.

The eldest of eleven, Bill grew up in Newton, Massachusetts. He was a graduate of Boston College High School, the College of the Holy Cross ('62) and Harvard Business School ('67). Bill began his career in commercial real estate finance in San Francisco with the Rouse Company. Returning to the East Coast, he and Gay raised their family in Manchester- by-the-Sea, Massachusetts and he continued his real estate career as a partner at Fowler, Goedecke, Ellis and O'Connor in Boston. Always desirous of returning to the West Coast, Bill and Gay moved back to San Francisco where he joined Argus Financial. Upon retirement, he and Gay relocated to Corral de Tierra on the central coast of California.

Siblings describe Bill as the elder statesman of the family. His consistent message emphasized the importance of family, kindness, humor and adventure. An avid reader, lover of Chinese food, fine wines and travel, he began his many explorations as a young officer in the Navy when he served in Japan and the Mediterranean and subsequently travelled the world. Ironically, his favorite writer was John Steinbeck, author of The Pastures of Heaven, where Bill happily spent his final years.

The family wishes to thank his caregivers, Inga, Sheveleva and the staff at Brookdale Manor in Carmel Valley. Donations in Bill's memory may be made to Boston College High School, 150 Morrissey Blvd, Boston, MA, 02125. A family service will take place on Cape Cod this Summer.

Published by San Francisco Chronicle from Jun. 18 to Jun. 19, 2021.
To plant trees in memory, please visit the Sympathy Store.
MEMORIAL EVENTS
To offer your sympathy during this difficult time, you can now have memorial trees planted in a National Forest in memory of your loved one.
MAKE A DONATION
MEMORIES & CONDOLENCES
2 Entries
Heartfelt condolences to all of you! I remember when we were young Kathleen said Bill had a "Birthday Fetish," gathering everybody to celebrate birthdays.( Gathering your huge family was no small task.) Later, with age, I realized it was his way of keeping you all together. Brilliant and Kind. Until we meet again, may God keep us all in the palm of his hand.
Virginia "Ginny" Barry Kleinrock
June 24, 2021
Wishing you well, Bill, on your future travels. May we all join you one day in the pastures of heaven.
Daniel Marshall '62 (HC)
June 22, 2021
Showing 1 - 2 of 2 results