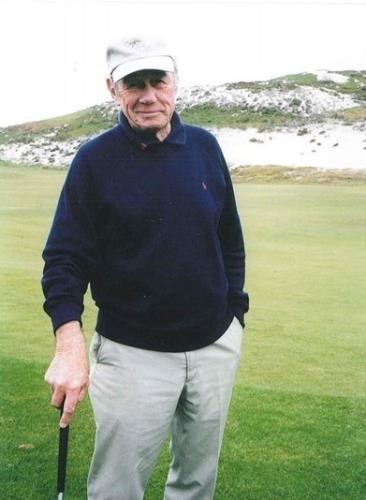 BORN
1928
DIED
2020
Willis Kane Polite
5/30/1928 – 6/1/2020
Willis Kane Polite lived a long, rich life. He died June first, one day after celebrating his 92nd birthday with all of his 6 children and most of his 16 grand children at his side. His never-ending wit and humor showed through with a smile on his face and twinkle in his eye right up to the time of his passing. Will was revered by those who knew him and will be remembered for his kindness and profound generosity. Hard work, dedication and a commitment to excellence were the hallmark of his personal, business, family and athletic achievements.

Willis Kane Polite, aka "Popeye", was born in McKeesport, Pennsylvania on May 30, 1928. He was the youngest of three children born to John Leonidas Polite and Marie Kane Polite, He grew up in Aspenwall, Pennsylvania along with his elder brother, Jack Polite and his sister, Barbara Polite Grant. Will had fond memories of playing in the wild fields of the waterworks property adjacent to his childhood home. He attended St. Scholasticas, and Aspenwall public elementary school. At the outbreak of the war, the family relocated to Lincoln, Nebraska where his father joined an airplane manufacturing business. It was in Lincoln where Will made many of his lifetime friends. He attended Lincoln Middle and High Schools, the University of Nebraska, and Creighton University, in Omaha. Will, always a lover of sports, played football and tennis, winning the tri-state doubles championship in High School. As a caddy at The Lincoln Country Club, will picked up his life-long passion for golf and went on to win the Club Championship several times. When the Korean War broke out, Will enlisted in the Navy and was accepted into officer candidacy school in Newport, Rhode Island. He recalled this as being one of the best decisions of his life. In the service he learned "discipline and dedication" that would serve him well throughout his business career and personal life. After OCS, Will was commissioned as a Navigator for the USS Rushmore, and spent two years navigating the waters from Greenland to Hudson Bay to Cuba.

Will met and married the love of his life, Mary Bauman, on May 31, 1952. They were married in her hometown of Alliance, Nebraska, where their first child was born. Will and Mary moved to Norfolk, Virginia, where Will was stationed during his early years of service and their second child followed soon thereafter. They then moved to Ohio and had four more children while they lived in the towns of Chagrin Falls, and Shaker Heights. They built their first home in Gates Mills along the banks of the Chagrin River. Will loved the game of golf and tennis, was a co-founder of the Cleveland Racquet Club and an active member of the Kirtland Country Club.

Will's business career began as a dealer representative with the Ford Motor Company in the upper Plains states, where he was reprimanded when he "altered" company property by installing a radio in his car to help pass the endless hours of driving between dealerships; he was clearly ahead of his time. While raising his young family, Will attended night school to earned his MBA degree from Case Western Reserve University. Will later became a manufacturer's representative for Coleman Co. in Cleveland. In 1965 Will began his investment banking career, commuting to work each week in New York City, where he enjoyed time with his brother Jack Polite. Will then partnered with his friend W. Hayden Thompson, to begin Seagate Investment Company investing in commercial real estate in Ohio, Pennsylvania, Arizona and Florida. In the early 1970's Will sensed the opportunities evolving in California and he moved west to join his friends at Hogland, Bogart and Bertero to invest in commercial real estate in the San Francisco Bay Area. Ultimately, Will enjoyed watching the success enjoyed by his sons, Wick and Mark Polite and his son-in-law, Dennis Fisco, as they created and built Seagate Properties, Inc.

Will was married to his second wife, Lucy Krill, in 1973 and moved to Belvedere, California, where he lived for 20 years. Will enjoying an active social life and many friends as part of the S.F. Yacht Club and Belvedere Tennis Club. Will befriended many in the Bay Area, as evidenced by his active participation in the San Francisco Golf Club, The Meadow Club, and Cypress Point Golf Club. He was also a member of many business and civic organizations including the Pacific Union Club, and the Jack Daniels Memorial Investment Club. Nationally, he was an active, life long member of the Urban Land Institute, serving on the ULI Board of Governors. He was also a founding member of the Roaring Fork Club in Basalt, Colorado and active in the US Seniors Golf organization.

Will always loved the high mountains of Colorado and the sport of skiing. He ultimately fulfilled a life long dream with the creation of Snowmass Valley Ranch. The refurbishing of the original valley homestead, with it's barn, buildings, fields and pond along Snowmass Creek, became a source of family bonding over the ensuing 38 years.
Will and Mary remained friends and stayed in close touch despite their years of separation and enjoyed time together while their children found wonderful spouses and produced 16 grand children. On September 12, 2017 Will and Mary were re-married in a small ceremony in Aspen Colorado. In their final years together they lived in Mill Valley, California, and enjoyed quiet, peaceful times together watching their many offspring and grandchildren grow, thrive and succeed in their varied endeavors. Will lost Mary on March 25, 2019, just one year before he passed. Their beloved ranch will be their final resting place together. Will and Mary are survived by their six children: Willis (Wick) Polite (Naomi), Pam Polite Fisco (Dennis), Cindy Polite Kamm (Mike), Mark Polite (Dorian), Katy Polite Link (Brian) and Karen Polite. "Popeye" and "Grams" are also survived by their 16 grandchildren Kane, Kimberly and Kyle Polite, Meghan Polite Rudnick (Aaron), Michael Polite, Gavin (Laura), Dana (Chris) and Peter (Kristin, great grand son William) Fisco, Kelsey and Caroline Kamm, Chloe, Thomas James and Tatum Polite, Dylan and Weston Link and Mandy Polite Sullivan.

Will's incredible generosity was greatly appreciated by all those around him. He was a gentle soul who had a genuine interest in other people. He loved history, was a great reader and loved to dance and listen to western music. Will had the ability to make friends with everyone and his focus on listening to others made them feel important. He provided sage advice and words of wisdom and encouragement to all who were lucky enough to spend time with him. He was very humble and treated every human with equal respect and honor. Will truly valued his relationship with the fine caddies at San Francisco Golf Club and Cypress Point Golf Club.

Will was deeply loved and will be dearly missed.

Will requested that any donations in his memory be made to the SFGC Caddie's Fund c/o San Francisco Golf Club and/or the San Francisco/Marin County Food Bank.

Published by San Francisco Chronicle from Aug. 2 to Aug. 8, 2021.
To plant trees in memory, please visit the Sympathy Store.
MEMORIAL EVENTS
To offer your sympathy during this difficult time, you can now have memorial trees planted in a National Forest in memory of your loved one.
MAKE A DONATION
MEMORIES & CONDOLENCES
1 Entry
Thank you for your brave service to our country !
veteran
August 3, 2021
Showing 1 - 1 of 1 results