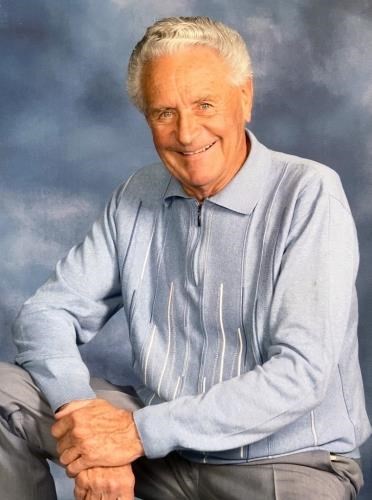 FUNERAL HOME
Crosby-N. Gray & Co. - FD-96
2 Park Road
Burlingame, CA
Willy Ostertag
March 22, 1939 - September 13, 2021
The world lost an incredible soul on September 13, 2021… one of the greats… a remarkable man. Willy Ostertag, 82, passed peacefully at Kaiser Hospital in Redwood City, CA, at which time he was surrounded by his loving family in his final hours.
Willy was born March 22, 1939 in Amriswil, Switzerland, the youngest of four children. He was a brother to Alfred (Lydia), Erwin (Marie), and Ursula Dupuis (André). After completing his education in Switzerland along with his apprenticeship as a master mechanic, Willy emigrated to the United States on the maiden voyage of the SS France in February 1962 with 20 Swiss francs in his pocket and his chest x-rays under his arm. He settled in the Bay Area and began his journey as a successful entrepreneur, which served him and others well for over 60 years.
Capturing his spirit in a few sentences is nearly impossible. The man had a lust for life. He was an avid golfer and his stiffest competition was his wife, Sandy, who always brought out the twinkle in his eyes. He absolutely adored his family and made every effort to create memories that would last a lifetime – from regular family trips to his home country in Switzerland, to packing everyone into his plane for exciting day and weekend adventures. He was a mischievous prankster and his jokes, gags, and hearty laughter were just a moment away.
Autohaus Europa provided Willy with the opportunity to mentor many new entrepreneurs in launching a successful business of their own. Willy's entrepreneurial spirit expanded into building affordable senior living. Willy was dedicated to his community of extended family and friends through his involvement in the Our Lady of Angels Church, the OLA Men's Club, the Swiss Club Tell, his Capuchin Franciscan brothers, and the cherished and many valued and special friendships he enjoyed at Green Hills Country Club.
Very near and dear to Willy's heart was helping the most vulnerable children around the world. Willy often worked secretly behind the scenes to make a significant difference in the lives of many. He was an extremely generous man and also very humble. We will never know the extent to which he has helped others in this world. Willy made an indelible mark on the lives of so many.
Willy is survived by his loving wife, Sandy; his four daughters, Madeleine Bucher, Bernadette Whitney, Michele Ostertag and Renée Ostertag; two sons-in-law, Brian Bucher and Steve Whitney; and his nine grandchildren from around the world; Matthew Bucher, Renata Kolinko (Matthew), Jakob Bucher, Mary Whitney, Wesley Whitney, Susan Whitney, and Joseph Whitney, Alexandria Bagot, and Thomas Bagot; and uncle to many nieces and nephews.
Donations may be made to one of Willy's favorite organizations, United St. Francis Foundation, a 501(c) 3 organization that helps children in Kenya, Mexico, and the United States.
Donations may be made online at www.usffoundation.com.

Published by San Francisco Chronicle from Sep. 22 to Sep. 26, 2021.
To plant trees in memory, please visit the Sympathy Store.
MEMORIAL EVENTS
Sep
16
Rosary
7:00p.m.
Crosby N. Gray & Co.
2 Park Road, Burlingame, CA
Sep
17
Funeral Mass
1:00p.m.
Our Lady of Angels Church
1721 Hillside Drive, Burlingame, CA
Funeral services provided by:
Crosby-N. Gray & Co. - FD-96
MAKE A DONATION
MEMORIES & CONDOLENCES
Sponsored by Crosby-N. Gray & Co. - FD-96.
3 Entries
I never met Willy, but I met dad through the spirit and footprint that his daughter Michelle, whom I met and have been connected with in Kenya for more than a decade now. I know him to be a devoted father who inspires, supports and loves his family dearly. He came across as a strong pillar that could be leaned on as well as a source of joy to those he held dear. In this time of great sorrow, I wish all those he left behind sincere gratitude for reflecting his love on the world to those of us, fortunate to know you. May you always be blessed. Feel loved and cherished always.
Chilande Kuloba-Warria
Friend
September 23, 2021
The entire Swiss communities along the western US have lost a true friend and faithful participant. Our family especially has spent many wonderful times over the years with the whole Ostertag family. Auf Wiedersehen Willy, and God speed you to your eternal home. Carol Cavett & Family, WA State
Carol Cavett
Friend
September 18, 2021
"Goodbye, Willy"
Gilbert Yim
September 18, 2021
Showing 1 - 3 of 3 results