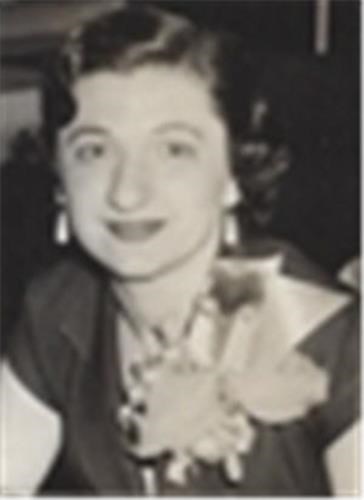 Yetta Gagosian passed away peacefully at California Pacific Medical Center in San Francisco on October 2, 2016, at the age of 91. She was born in Granite City, Ill on September 16, 1925 to Benjamin (Pomo) and Rose (Vartanoush) Kasparian. Yetta was preceded by both her older sister Helen Kasparian Folkerts of Virden, Ill, and her brother Sinbad Kasparian of Granite City, Ill. She graduated from Granite City High School and began work at the Granite City Army Depot assisting in office work during World War ll. Shortly after the War ended, she traveled to San Francisco for a vacation with her mother. Yetta fell in love with San Francisco and returned and lived with her Uncle and Aunt as a nanny to their children. She then returned permanently after her father's passing in 1951. While taking up residence and living at the Christian Women's Club on Nob Hill she worked for Wells Fargo Bank on Montgomery Street. She involved herself with making new lifelong friends across cultural and ethnic lines in her new metropolis. She also joined the Armenian young adult community building even further deep and lifelong connections in San Francisco. Through these connections, and with the help of her extended family, she met her future husband Khoren A. Gagosian the son of Aram and Biadzar Gagosian of San Francisco. They had a whirlwind romance and were joyously married on November 7, 1953 and celebrated 20 years together making their home in San Francisco. Yetta was widowed in December 1973, never remarrying.

Yetta's working career began at Wells Fargo Bank in the financial district on Montgomery Street. Some of the highlights of her working years were spent involved where her husband was Chef at the famed Omar Khayyam's restaurant at Powell & O'Farrell streets. George M. Mardikian, her uncle in-law, welcomed Yetta to participate in his restaurant during the busy seasons. She was thrilled as she was able to meet many dignitaries and stars while she was there. After her husband's death, she left her homemaking career, and began work with Bank of America NT&SA at the Powell & Market Street Office. She was with the Bank until retirement. She was greatly beloved by the executive team and her many co-workers. Close friendships are still being nurtured to this day from that experience.

No matter what her circumstances, she was always on-the-go, very active, a strong yet gentle woman of influence to her younger counterparts and their children. Yetta loved to cook and bake her Armenian delicacies learned from her mother and aunts and entertained regularly. No one was ever a stranger in her home or her church, as one was drawn to her vibrant personality and her acceptance of them into the fold. Remarkably, but not surprisingly, she was a servant - leader to her elder community making meals from her home and visiting weekly shut-ins and those with lesser means. She always remained physically active with her daily walks around Lake Merced. She met daily with friends, celebrating life, sharing prayer requests and listening to heartfelt cries. Often this was done over a Latte or Cappuccino and a pastry at either West Portal or Lakeside Village. This truly gave her the opportunity to share and impact others in so many ways with her genius of generosity and loving spirit. As the youngest daughter of Armenian immigrants to America, Yetta was deeply attached to her family, Armenian heritage and culture. She was a woman of Protestant Christian faith and a member of Temple Baptist Church on 19th Avenue. Her generous spirit and gift of hospitality was utilized exponentially. Because of her extra special love of seniors, she was faithful to being the head of Senior Center for many years always ensuring her friends and their new guests were loved and well fed. She was influential in starting a branch of Bible Study Fellowship in the San Francisco Bay Area where she attended faithfully for many years.

Yetta is survived by her beloved son Ronald K. Gagosian and faithful daughter in-law Kimberly Rhine Gagosian of San Francisco, and many first cousins and their families - Philliposian, Odian, Spataro, Donian and her sister in-law Mary (Gagosian) Koobatian and family and her vast circle of friends.

The family would like to thank and honor all those who contributed in the care and love of Yetta during the past four years.

Yetta's life will be celebrated at Temple Baptist Church at 3365-19th Avenue in San Francisco at 10 O'clock AM on November 1, 2016. The family suggests donations signifying her name to her beloved causes:

Published by San Francisco Chronicle from Oct. 22 to Oct. 23, 2016.
To plant trees in memory, please visit the Sympathy Store.
MEMORIAL EVENTS
Nov
1
Service
10:00a.m.
Temple Baptist Church
3365-19th Avenue, San Francisco, CA
Funeral services provided by:
Duggan's Serra Mortuary
MAKE A DONATION
MEMORIES & CONDOLENCES
Sponsored by Duggan's Serra Mortuary.
3 Entries
To Ronny and Kim
We were so very saddened with the recent news of our dear friend
Yetta'scpassing.
We have many fond memories of her from the many years past .

We pray for her soul and may god give you much peace whenever
You think of her.
May god bless you both.

Rosemary and Norman Kondy❣
Rosemary and Norman Kondy
April 24, 2017
What a beautiful, honoring tribute to a bonafide woman. Yetta was an incredible person and this profound piece honors her compelling story well. I can see her influence in the lives of Ron and Kim. Her legacy will live on. Yetta was before her time in being a strong female leader and it's obvious that her influence was far reaching. Much love and prayers to Ron, Kim, and Yetta's family/ friends who are grieving this loss, -Tara
Tara Rumler
November 1, 2016
Tiffany Arana
October 27, 2016
Showing 1 - 3 of 3 results