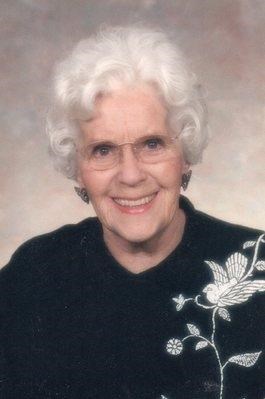 Beatrice A. (Wester) Krier, a resident of the Village of Belgium, Wisconsin, age 95, passed away on February 23, 2017 at the Harbor Village in Port Washington.

Bea, or Beatie as she was called, was born on a farm in the Town of Belgium on June 14, 1921. She was the daughter of Alois and Rose (Ansay) Wester. Beatrice Anna Wester married Herbert Edward Krier of Belgium on May 6, 1944 at St. Mary Catholic Church, Lake Church (presently Divine Savior Parish). Herbert, founder of Krier Refrigeration, passed away on May 25, 1988.

Bea's life was bountiful in experiences; she was giving of her talents to others while enjoying her family. As a homemaker; Bea spent time sewing, cooking, baking fancy birthday cakes, and babysitting her grandchildren (They all were taught two handed Sheephead and a few Luxembourg words).

Bea was on the Board of Directors of the National Flag Day Foundation. President of the Luxembourg Society of Wisconsin for 30 years, and a member of the Luxembourg American Cultural Society. Bea was a charter member and past president of the Belgium Legion Women's Auxiliary, president of the Local 3rd Order of St. Francis for 25 years, leader of the 4-H knitting club, and Cub Scout leader for 8 years. She enjoyed being a longtime member of Christian Ladies of St. Mary in Lake Church, Port Washington Historical Society, Port Washington Women's Club, and the Catholic Knights.

Traveling to all 50 states and 43 countries with family and friends was something Bea enjoyed, but genealogy was her passion; she discovered and recovered information for many families of Luxembourg decent. Bea was co-founder of Luxembourg Fest, helped coordinate many Luxembourg Festivals and Parades, founded the Green Heart Dancers and authored History of Town of Port Washington, and History of St. Mary of Lake Church (Divine Savior.). Bea was honored when her 1st book she authored Tapestry of Luxembourgers - Town Belgium History was placed in The Library of Congress in Washington DC.

Bea was preceded in death by her loving husband Herbert, her twin sister Blanche (the late Robert) Thill, her brother Bertram Wester and grandson Matthew Krier.

A Mass of Christian Burial will be held at 12 noon on Saturday, March 4th at Divine Savior Parish - Holy Cross Chapel (5332 Hwy B, Town of Belgium). Father Todd Budde and Father Jim Ernster will concelebrate. Bea will be laid to rest later at St. Mary Parish Cemetery, Lake Church. The family will receive visitors at the Holy Cross Chapel on Saturday from 9:30AM until services at 12 noon.

The Eernisse Funeral Home is assisting the family with arrangements. On-line condolences may be left at www.eernissefuneralhome.com .