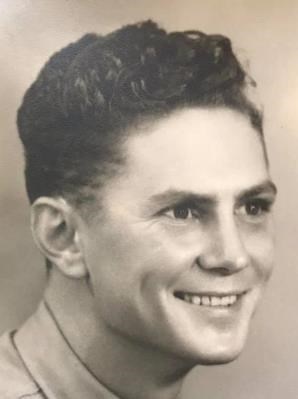 Sheboygan - James P. Schmieder, veteran of WWII, passed away at the age of 96

on Saturday, October 10th in Sheboygan.

Born on March 27, 1924 to Sylvester and Teresa (Ellerman) Schmieder in Brillion, WI, Jim grew up in rural Manitowoc and Sheboygan counties. He was the only brother to Elaine (Robert Jensen) and Florence (Bill Zelko), all deceased.

As a young man Jim had a sense of adventure that often involved testing the limits of various automobiles, including his beloved 1936 Cord. Fortunately for us, he survived several rollover accidents.

After graduating from Sheboygan Central High School in 1942, Jim did what most young men of his age were doing and joined the U.S. Army. He served and fought for his country, moving through Europe with the 7th Army. He earned two bronze stars for his heroics but it wasn't until much later in life that he was able to share stories from his war years.

Returning from France, Jim wooed and wed the lovely Connie Scribner, and they were married at Holy Name Catholic Church on September 2, 1949. Four children followed, Lynda (Eirich) and Cindy (Van Akkeren). Daughters Katherine and Christine both died in infancy. The family settled into their home on Wilson Avenue, where Jim was able to walk to work at the Edgewater Power Plant during winter snow storms.

With a full bar in the basement and an extensive collection of big band and country music; Jim and Connie regularly entertained their many friends. Jim's basement workshop gave him space to tinker and fix things. As a child of the depression he saved everything, neatly labeled in cigar boxes that were filled with nuts, bolts, screws, wires, nails by size, maps, travel brochures, stamps and beer labels. Perhaps Jim had the first man cave.

Jim taught his daughters to downhill ski at the Greenbush ski hill in Kettle Moraine. They learned to water ski behind the "Snoopy C" during annual family vacations to Deerfoot Lodge on the Chippewa Flowage. Jim was an outdoors man, fishing in season and then hitting the deer camp with his buddies every November. He loved to bowl, take photos, and spend Friday nights at the Elks Club, where he has retained his membership all these years.

The purchase of a Winnebago motorhome in the early 70's sent the family on travels across the US. As the cost of gas kept rising, the motorhome was eventually traded in for a trailer, allowing them to settle in at a permanent campsite in Marquette Co for their retirement years. Making more new friends, Jim and Connie explored the area while Jim discovered many new fishing holes.

As they aged Jim and Connie enjoyed many travels with daughter Lynda and her husband Dennis. Trips to Door Co, northern Wisconsin, and California enriched their lives and kept them active until last year. Their daughter Cindy and husband Jim further added to their lives with the addition of grandchildren, Hannah, Sam and Bram.

In 2012 the two Jims were able to participate in a veterans Honor Flights to Washington DC. It helped Jim to reconcile his years in the war and he was astonished by all of the attention that day brought to him. On the return from DC, Jim thought that the throngs of people lining the airport were cheering for someone "truly" important. They were indeed.

In 2018 it became necessary to sell the house on Wilson Avenue, along with Jim's many collections of memorabilia saved through the years. In 2019 nephews Jim and Jerry Zelko traveled from California, along with nephew Bob Jensen, niece Sue (Jensen) Mosnik and her husband Ron, all of Green Bay, who joined our family to celebrate their 70th wedding anniversary. Jim and Connie were happy together for two more years in their apartment at Terrace Place. With the compassionate care received fromTerrace Place staff and Sharon Richardson Hospice, Jim was able to stay with Connie until the very end.

Jim did his patriotic duty when asked. He didn't complain about his loss of freedom when his country required him to go and fight the facist in Europe. Likewise, we ask you to do your patriotic duty during the COVID-19 pandemic. Please wear a mask in public! The last half year of Jim's life was greatly restricted due to COVID, limiting his ability to leave the apartment or have contact with family. He nearly sacrificed his life for this country. Now it's the least we can do to honor him by wearing a mask to protect all Americans, especially those most vulnerable.

Jim was a modest man. He didn't want a memorial service. So instead, mix yourself a cocktail, turn on your favorite music (loud) and make a toast to a life well lived….To Jim Schmieder!

The Olson Funeral Home & Cremation Service has been entrusted with Jim's arrangements.

To plant trees in memory, please visit our Sympathy Store.
Published by Sheboygan Press from Oct. 14 to Oct. 15, 2020.
MEMORIAL EVENTS
No memorial events are currently scheduled.
To offer your sympathy during this difficult time, you can now have memorial trees planted in a National Forest in memory of your loved one.
Funeral services provided by:
Olson Funeral Home & Cremation Service
MEMORIES & CONDOLENCES
Sponsored by Olson Funeral Home & Cremation Service.
11 Entries
I had the pleasure of meeting Connie and Jim about a year or so ago. They were a lovely couple and it was clear that they took care of each other and really enjoyed each other’s company. Sending condolences to Connie and her family. I will be sharing a toast to Jim!
Lisa Gamble, OTR
Acquaintance
October 19, 2020
Our sympathies to you Connie and your family. My parents, Joan and Norm Knier, shared many stories through the years about you and Jim. They certainly enjoyed your company. What a wonderful tribute.
Julie Knier Conrad
Friend
October 19, 2020
I don't read obits often but this one is different. Jim sounds like a GREAT MAN. I wish that I would have known him.
Jim Parman
October 17, 2020
My sympathies to you Connie, and also to the family.
Jim was truly a great guy. I was so privileged to have him as a friend.
I, and the world will truly miss him.
Mike Mayer
Friend
October 15, 2020
My Dad (Norm Knier) told me of Jim's passing. He has wonderful memories of fishing with Jim & always enjoyed both of you! Sympathies to you & your family, Connie.
Mike Knier
Friend
October 15, 2020
Dear Lynda and Cindy and your families...so sad to read about your Dads passing. He was the nicest man and we will remember him as one of the Buck Busters!! Our heartfelt condolences. Del and Cindy Kubichek
cynthia j kubichek
Friend
October 15, 2020
May I say that was a beautifully written tribute to a man who lived a life of goodness and dedication. I am certain he is resting eternally now in the arms of our Lord.

God bless all of you.
Bob Drews
October 15, 2020
So sorry Connie in your loss of Jim. We enjoyed living across from you on Wilson Ave. We remember him always telling Jim how he did fishing on Buffalo Lake. Jim fished there and still does. Sympathies to you and your family. Take Care.
Jim&Debbie Reinholz
Friend
October 14, 2020
I worked under Jim in the lab at the Edgewater Generating station. He confided with me several war stories. He was a true American hero and friend. I will remember those days in his basement. Rest in peace.
Michael Rios
Coworker
October 14, 2020
It was a pleasure to take care of Jim and keep him comfortable. He will be missed
Melissa terrace place staff
Melissa koch
October 14, 2020
Although I never met Mr. Schmieder, I wish I could have. Typical of the "Greatest Generation," he must have been very proud to serve his country, while remaining humble about it. My very best to the Schmieder family.
David Kuckuk
Friend
October 14, 2020
Showing 1 - 11 of 11 results