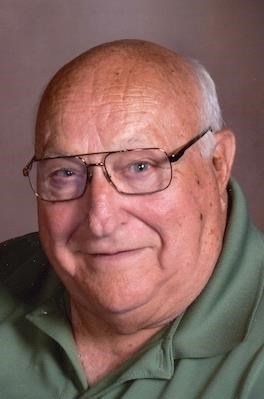 of Chilton - Marvin E. Thielman, age 84, of Chilton, passed away peacefully on Sunday, October 11, 2020, at St. Elizabeth Hospital in Appleton.

He was born June 16, 1936, in rural Chilton "Charlesburg" to Lloyd & Mary Ann (Vichich) Thielman. Marvin graduated from New Holstein High School in 1954. On July 5, 1958, he married Mildred Schneider at Holy Rosary Catholic Church in New Holstein; they celebrated 62 years of marriage this past year.

Throughout his working career, he attended numerous management seminars. Most of Marvin's working career began at the former Carnation Company in Chilton; which was sold to other various owners. He retired from Land-O-Lakes on April 1, 2000.

Marvin had purchased his parents farm which kept him busy, especially picking stones and other chores involved with operating a farm. He loved to snowmobile, ride his ATV around, and fish. He was an avid watcher of the Wisconsin sports team and religiously read his daily paper from front to back; the sports section was his favorite.

Marvin was a member of Holy Rosary Catholic Church in New Holstein, the Holy Name Society, and the Catholic Knights.

A memorial fund will be established in his name. Please direct memorials to Family of Marvin Thielman C/O 946 N. Mill Road Chilton, WI 53014.

Marvin's family would like to express their sincere appreciation to the St. Elizabeth Hospital care givers who took great care of him the past 3 weeks.

The Sippel Funeral Home in New Holstein is assisting the family (920) 898-4300 www.sippelfuneralhome.net.

Published by Sheboygan Press from Oct. 12 to Oct. 15, 2020.
To plant trees in memory, please visit the Sympathy Store.
MEMORIAL EVENTS
To offer your sympathy during this difficult time, you can now have memorial trees planted in a National Forest in memory of your loved one.
Funeral services provided by:
Sippel Funeral Home - New Holstein
MAKE A DONATION
MEMORIES & CONDOLENCES
Sponsored by Sippel Funeral Home - New Holstein.
5 Entries
It was an honor to care for Marvin. May you find peace and comfort during this very difficult time.
October 16, 2020
On behalf of the Hootman Family and my father John, we wish to express our sadness to Millie, Debbie and Tony, in Marvin’s passing. He was a great neighbor and friend to John and Carol over the many years they both resided on Lake Winnebago. He was a kind man with a wonderful sense of humor. I will remember how easily he laughed and the special visit he and Millie paid us this past summer at the lake. Please know you are in our thoughts and prayers.

Sincerely,
Bonnie Hootman Fisher
Bonnie Fisher
Neighbor
October 14, 2020
A very wonderful neighbor
Beveverly Wittmus
October 13, 2020
Our most sincere condolences to Millie, Debbie and, Tony during this time of loss. Uncle Marvin was one of the truly good people we have had the pleasure and honor to have in our lives. He was easy to talk to and always seemed to have the right thing to say (well unless the Packers were playing poorly). He will be dearly be missed. R.I.P. Marvin.
Jim/Debra Sukowaty
Family
October 13, 2020
My most sincere sympathies to Millie, Deb and Tony at this difficult time. Everyone knows that Marvin was a great guy, he always had a smile on his face and was full of good jokes and one liners. I always enjoyed seeing him and Millie in the past at weddings and other family get togethers. He will truly be missed.
Jim Pethan
Family
October 12, 2020
Showing 1 - 5 of 5 results