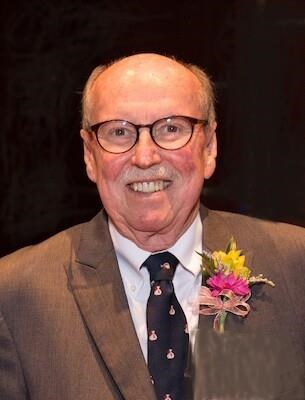 Arrangements to celebrate Ralph's life will be made at a later date.

Ralph grew up in Waukesha, where he attended Randal Grade School and Waukesha High School. He then attended Lakeland College, where he met the love of his life, Diane Danner. During college, Ralph and Diane met acting in a play together; their love of theater and music was something they would share all of their lives. Ralph was registered and ready to attend graduate school at Yale University but that summer was singing in a college quartet and while touring in Colorado, his lung collapse. A required surgery derailed his graduate school plans and changed his life significantly.

On Columbus Day, October 12, 1958, Ralph and Diane were married. Ralph will always be remembered for saying, "Columbus took a chance, and so did I!" After their marriage, Ralph worked at Lakeland College in admissions, working his way up to Development Director and Assistant to the president. After working together at Lakeland College for 17 years, Ralph and Diane moved to Pontiac, Michigan (a Detroit suburb) where Ralph was the Development Director at St. Joseph Mercy Hospital for 10 years. It was there Ralph met Pete Estes, CEO of General Motors, who chaired the Foundation board and became a mentor to Ralph.

During these early years, Ralph and Diane's giving spirit shone through professionally as well as personally. While in their 30s, Diane's college roommate passed away unexpectedly. Ralph and Diane helped provide support and care to the five children left behind. That compassion and empathy is part of Ralph's legacy.

In 1984, Ralph and Diane moved to Marshfield, Wisconsin, where Ralph began work at Marshfield Clinic as Development Director for the then Marshfield Medical Research Foundation. As Development Director, he was instrumental in the fundraising for the Lawton Center and Laird Center for Medical Research; he was extremely proud of the Laird Train for Medical Research. Ralph's favorite Marshfield Clinic memory includes the Laird campaign and dedication of the first Laird Center with President Ford, Secretaries Henry Kissinger and Lawrence Eagleburger, Secretary of Health and Human Services Dr. Louis Sullivan, and the late Robert Froehlke. Ralph's career was a true labor of love, working to support meaningful causes. He developed life-long relationships with donors, Clinic friends and community leaders. He and Diane hosted Clinic events in their home; Ralph always enjoyed a good celebration. Ralph retired in 2002, but he certainly did not slow down.

Ralph's talents and passion were a gift to the community; volunteerism was a significant part of the life he and Diane created together. Ralph volunteered his time with numerous community organizations. He was a Rotarian, where he served as Rotary President and was a Paul Harris Fellow. He attended the Rotary International Conference in Taipei, Taiwan in 1994. On the way there, their plane nearly crashed and Ralph and Diane were stuck at a military base in a remote part of China for days until a new plane arrived. Ralph volunteered at the Presbyterian Church, where he served as an elder and deacon and served on the committee to help fundraise for the new church. Ralph volunteered at Opportunity Development Center, the YMCA, the House of the Dove, MACCI and others. He voluntarily co-chaired a fundraising campaign for a Hospice home in Sheboygan, in memory of a dear friend. Ralph remained active with Marshfield Clinic helping at Golf for Research, Fore a Cure, and many other activities. He served for decades on the National Farm Medicine Center - Auction of Champions committee (an event he helped establish) where he led the singing of America the Beautiful.

Ralph and Diane split their time between their home here in Marshfield and a winter residence in Mesa, Arizona, where he served on the Leisure World foundation board and was chair of the Friends Committee. Together they enjoyed golfing, swimming and doing yard work. Ralph was a die-hard Packers and Badgers fan. He and Diane built beautiful friendships in both communities and Ralph will always be known as being a friend to everyone. Ralph and Diane loved to travel with friends and especially enjoyed many trips to Europe and the British Isles.

Ralph's strong faith and compassion carried him though many challenges in life, including multiple cancer journeys and surviving major heart surgery; despite dealing with many challenges on his journey, he always had a smile on his face and a hug and a kiss for those loved. Ralph was committed to the hope of finding a cure for cancer through his philanthropy and volunteerism. He would joke about removing the donor sticker on his driver's license, chuckling and saying that he'd be happy to donate his organs, but he wasn't sure if he would have any organs left!

Ralph will always be remembered as a great mentor and caring friend. His smile could light up a room. He truly enjoyed encouraging people and helping them get involved with meaningful activities. Ralph's spirit of giving inspired many to give to meaningful causes. His legacy has left an impact on many and his presence will certainly be missed.

Ralph leaves behind his wife Diane; together they enjoyed 61 beautiful years. He is also survived by his sisters-in-law Susan and Jean, and six nieces and nephews. Ralph was a proud godfather to 13 godchildren.

Ralph was preceded in death by his parents, his brother and only sibling David, his only brother-in-law Dean, as well as aunts, uncles, cousins and many friends.

Diane wishes to express her gratitude to Ralph's many physicians and providers at Marshfield Clinic Health System and Banner Baywood Hospital, Mesa. Ralph chose to donate his body to medical research…. so even after his passing, Ralph continues to give to help others.


Published by Sheboygan Press from Nov. 19 to Nov. 20, 2020.
To plant trees in memory, please visit the Sympathy Store.
MEMORIAL EVENTS
To offer your sympathy during this difficult time, you can now have memorial trees planted in a National Forest in memory of your loved one.
Funeral services provided by:
Rembs Funeral Home
MAKE A DONATION
Please consider a donation as requested by the family.
MEMORIES & CONDOLENCES
Sponsored by Rembs Funeral Home.
1 Entry
Dear Diane,

We offer our deepest condolences on the passing of Ralph. It was a pleasure to get to know you both through my sister, Jean Rusch Wesley. We enjoyed several occasions together over the years. May the God of all comfort uphold you.