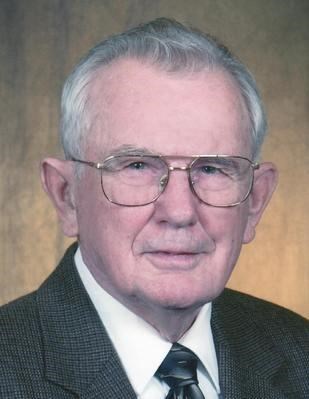 Sheboygan - Rev. Ruben Grosshuesch, age 97, died on Saturday, May 18, 2019 at Sharon S. Richardson Community Hospice Center. He was born July 29, 1921 at Stratford, WI to Rev. Calvin and Alice Grossheusch (Kuhlmann). He received his education in the public schools of Klemme, IA, graduating from high school in 1939. He graduated from Mission House College (now Lakeland College) in 1943 and from Mission House Seminary (now United Theological Seminary) in 1946.

While he was in college he played football, basketball and participated in track. He received the Hauser-Kuplic Award for outstanding athlete in 1942 and again in 1943. While he was a Seminary student he coached the college basketball team for three years, leading them to the first conference championship in the school's history. In 1961 he was one of the first members inducted into the newly formed Lakeland College Hall of Fame and served for many years on the Board of Directors of that orginization.

A son, grandson and great grandson of ministers, Mission House was dear to his heart, his family having been involved from its inception. Rev. Dr. Herman Muehlmeier, Ruben's great-grandfather, was one of the founders of the school. Rev. Tillman Grossheusch, another great-grandfather, was one of the first students to enroll at the school. Succeeding generations saw his grandfather, Dr. John Grossheusch on the faculty, and his uncle Dr. Paul Grosshuesch serving as a president of the institution. Many family members are graduates of the school.

Ruben served St. John's Evangelical and Reformed Church, Melbourne, IA from 1946 to 1957. During which time a new church building was erected. The debt being retired in 1956. While in Iowa he directed many youth camps and was appointed Youth Director for the Iowa Synod of the Evangelical and Reformed Church. He was president of the Board of Directors of the Deaconess Hospital in Marshalltown, IA for a number of years and a member of the Executive Committee of the Iowa Council of Churches, serving as secretary of that group.

From 1957 to 1986 he pastored Ebenezer United Church of Christ in Sheboygan, WI. The congregation re-located and constructed a new church building in 1970. The debt was retired in 1978. A strong program of Christian Educations developed during his pastorate at Ebenezer, involving Church school, Confirmation instruction, Bible School, Youth Fellowship, and Adult Classes. In 1991, in a six denomination study, sponsored by the Lilly Foundation, Ebenezer was recognized as one of five U.C.C. congregations to have an effective program of Christian education.

During his 29 year ministry in Sheboygan, Rev. Grossheusch served as president of the Sheboygan Ministerial Association, director of the Sheboygan County School for Chrisitian Workers, chairperson of the Autumn Religious Festival, director of the camping program of the North Wisconsin Synod of the Evangelical and Reformed Church, director of the Family Camping program of the Wisconsin Conference of the U.C.C. and a member of the Board of Directors of Moon Beach Camp at Eagle River, WI. After his retirement from the active ministry, he served as Interim Pastor of St. John's U.C.C. at Elkhart Lake, St. Mark's U.C.C. at Cleveland and St. James U.C.C. at Spring Valley.

Ruben loved outdoor activities such as golf, gardening, hiking, canoeing, and camping with his family. He was an active member of the Evening Optimist Club and Ebenezer Breakfast Club.

In 1945 he was united in marriage to Joan Leschensky of Waukon, IA. Children born to this union were Judith Lee (Keith Ollis) of Vancouver B.C.; Joel of Littleton, CO; Robin (Merri Walters) of Ann Arbor, MI; and Peter (Maureen Shields) of Breckkenridge, CO.

He is survived by his children, grandchildren, sister-in-law Ruth, and numerous nieces and nephews.

Preceding him in death were his parents, his wife Joan, his brothers Calvin, Ewald and Edward, his sister Gertrude.

A funeral service will be held on Friday, May 24, 2019 at 11:00 a.m. at Ebenezer United Church of Christ (3215 Saemann Ave, Sheboygan) with Rev. Lorri Steward officiating. Friends may call on Friday, at the church, from 10:00 a.m. until the time of service. Please visit www.ballhornchapels.com to leave online condolences.

Special prayers to his children and their families.

A man I have great respect for.

God bless and rest in peace.
Charlene Edler Zimmerman
May 24, 2019
A close mentor when needed, a close friend of my family, whose advice was always respected. Your family knows this and my family enjoyed much in the UCC and other activities.

Peace after a long service. We could use many more like you.

From my family to yours.

Robin Richter
Green Valley, AZ
Robin B. Richter
May 23, 2019
When i lived in Sheboygan years ago ... he was my pastor ... i loved going to his church ....loved that wonderful church ... the people there ... His kindness and encouragement to me will never be forgotten ... you were /are a one in a million ... rest in peace .....
Eileen otto
May 21, 2019
Ruben Grossheusch remained throughout his life a kind and gentle pastor and servant of the Word. He remained for many of us who were ordained in the United Church of Christ an example of what one should strive to become. We remember Reverend Grosshuesch gratefully as a pastor and teacher who was faithful to his calling, humble in all he achieved, respectful of others, generous in accepting human weaknesses; one who embodied authentic Christian discipleship. Courageous and thoughtful towards others, his memory lives on among those who have known him, as a spiritual guide and leader, who embodied so much of what the Church is called to be from one generation to the next.
Rev. Frederick Trost
May 21, 2019
Sorry for your loss. Sending prayers to the family.
Deborah Hewitt
May 21, 2019
I am so sorry for your loss.
He was a wonderful compassionate man. There are so many souls waiting to greet him in heaven.
Sincerely,
Lynne (Reseburg) Munro
Lynne Munro
May 21, 2019
Condolences to the family. Rev. Grosshuesch was my pastor and the man that married my husband and I. After growing up and being confirmed Lutheran in my father's church, which seemed rather harsh to me, a child at the time, my family switched to my mother's denomination of U.C.C. This is where I met my true spiritual role model and guide. Rev. Grosshuesch was already a family friend of my parents who referred to him as Ruben, with ties to Lakeland University where my father graduated from and later was a life-long Professor and also a fellow member of the evening Optimist club. My siblings and I all graduated from Lakeland where his amazing athletic accomplishments were on display and it was kind of hard to fathom he also being my pastor. One story in particular in my relationship with him stands out though. I spent many of my college evenings singing with his wife in the choir, and attending Sunday bible class with her. After I met my husband at Lakeland, who came all the way from Wash. D.C., to get a degree, we were married right after my graduation. I was with my bridesmaids putting on the last touches when I heard this kind and gentle man say (in the hallway, outside the room) to my sweet mother-in-law, that if her son did not show up in the next ten minutes, he would have to cancel the wedding because he had another engagement. My heart skipped a beat. My fiancé, Kurt, took the wrong path in getting to the church. Then I heard my shy mother-in-law firmly state, my son will be here, and that was the end of that. Seconds later I heard Kurt's voice. It was the only time I heard both this gentle man and demure lady each speak a bit strongly. It took years for me to get over the embarrassment of what I thought was the most inconsiderate thing I had ever done by taking advantage of a man of the cloth, though it was never done intentionally. I don't think he gave it anymore thought and I welcomed him and his wife later at the reception. Thirty-nine years later, he has met my two grown daughters and my son-in-law. We now have two granddaughters and I contribute those blessings to his patience and understanding on that day (and am clearly in denial of the what if?) But, that is how I will remember him, not just as a religious leader, but a friend. Peaceful, kind, gentle, a welcoming smile, patient, understanding and concern for all. So many prayers, for so many years, he shared with my family and for my family. I now pray for you and with you.
Lori L. Wangemann-January
May 21, 2019
We were saddened to learn about Ruben's death, but rejoice in his long, vigorous, and faithful life. He was the last surviving member of an elite group of Sheboygan ministers with Mission House/Lakeland ties from the 1940s, which I once called the "Mission House Mafia" because of the strong bond of friendship they exhibited. Among other things he very patiently taught my dad to golf. Today at the meeting of the Wisconsin Conference Historical Committee we mentioned his name (and taught new members how to pronounce and spell it!) as we discussed a biographical dictionary of noteworthy Wisconsin UCC members which we are in the process of creating.
James Mohr
May 20, 2019
Showing 1 - 8 of 8 results