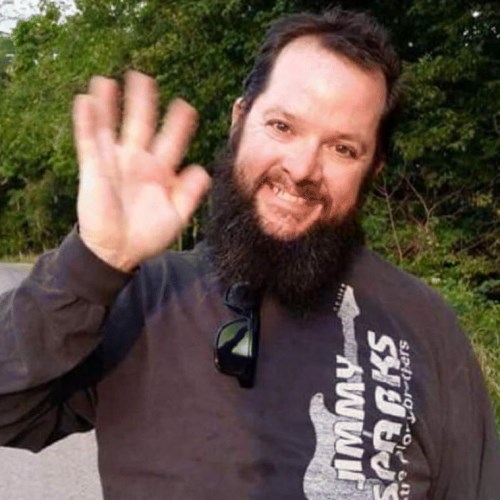 James Douglas Jett "Doug", 47, a proud husband, father, pop-pop and friend tragically passed away Monday afternoon, September 27, 2021, doing what he loved most; riding his father's Harley Davidson. Doug was born on December 4, 1973 at Methodist Hospital in Indianapolis to Ruthie (Dawson) Jett and Timothy Jett (deceased). Doug was married on July 29, 2006 to Kimberly (Stephens) Jett and she survives.

Doug graduated from Southwestern High School 1992, Indiana University, Bloomington June 2000 and was a 2014 graduate through the Indiana Carpenters Union and deeply enjoyed working with his hands as a carpenter and made several lifelong friends along the way through Local 301.

Doug was a phenomenal husband, father, pop-pop and friend. Doug loved playing drums from a very young age and grew to be a talented musician and played in several bands (Pan Handle

Road, The Smileys, Soulshine, Soul Biscuits, Unsung Zeros, Tin Pan Alley, Jimmy Sparks and the Felony Brothers and many more) through the years with his very close friends. He loved riding Harley Davidon's with his wife, children and friends. Doug also was an avid hunter, he was proud to have taught his two sons and daughters to hunt at his mother and father's property in Marietta, Indiana. Doug also loved his family pets dearly (Rocky, Hank, Petie and Cain). Above all, Doug adored being surrounded by his family and friends and always having a good time with them.

Doug will be dearly missed by his wife; Kimberly Jett of Knightstown, his daughters; Kaitlyn (Trey) Jett of Shelbyville and Allison (Ty) Jett of Rushville, his granddaughter; Ava Jane Underwood of Rushville, his sons; Kelton Magee of Knightstown and Jarrett (Karen) Magee of Knightstown, his older brother; John Jett of Indianapolis, his mother Ruthie (Dawson) Jett of Shelbyville, his uncles; Charlie Dawson of Indianapolis, Max Smith of Martinsville and Paul Jett of Indianapolis, his aunts; Lois Baudendistel (Bill) of Camby and Anna Lou Jett of Greenwood, his sisters- in-law; Teresa Cullison (Dan) of Carthage and Dawn Sanders (Nathan) of Carthage, his brothers-in-law; Chuck Stephens (Heather) of Carthage and Tim Stephens of Muncie. He will also be dearly missed by many nieces, nephews and cousins.

Doug is preceded in death by his father; Timothy Jett.

Services to remember Doug will be held at Hinsey-Brown Funeral Services in Knightstown,Indiana. The viewing will be held on Thursday October 7, 2021 from 4pm – 8pm. There will also be an additional viewing on Friday October 8, 2021 from 1pm – 3pm. The Funeral will be a closed service for family and close friends. You may express condolences or a memory of Doug at www.hinsey-brown.com.