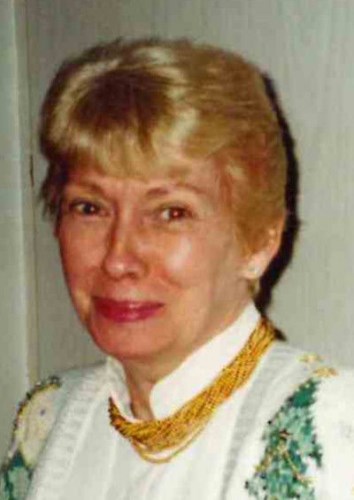 Jane was born on July 30, 1937 in Shelbyville, Indiana to Moris and Helen (Ross) Vanway. She married Peter St. Hill on December 28, 1985. Jane is survived by her sons, Brad DeMott (Becky) and Link DeMott (Aki); granddaughter, Kristin DeMott; step-granddaughters, Marcy Klem and Kelly Rush; and 9 great-grandchildren. She was preceded in passing by her husband, Peter St. Hill; parents, Moris and Helen Vanway; and brother, John William Vanway.

Jane grew up in Shelbyville where she graduated from Shelbyville High School in 1955 and went on to attend IUPUI.

After her marriage to Peter in 1985, they moved to St. Louis, Missouri. There she volunteered at Backers Volunteer Board in 1986; Webster College in 1996; and from 1986-1996 she volunteered for the Assistance League of St. Louis as well as the Prime Time Treasures.

After her move to Sarasota, Florida, Jane spent her time volunteering as an usher at the Banyou Theater Co. from 2003-2007; Historic Asolo Theater from 2009-2010; Florida Studio Theater from 2003-2013; Asolo-Mertz Theater 2000-2015; and the Cook Theater. She also volunteered for the Welcome Wagon, New Comers, and Palm Singles.

There will be no services at this time. Flinn and Maguire Funeral Home is assisting the family with arrangements.

Mrs. St. Hill and her family would like to thank Nurse Melania from Community South Hospice for her loving care during Jane's final months.

Online condolences and other expressions of kindness are appreciated at www.flinnmaguire.net

Published by The Shelbyville News on Oct. 20, 2021.
To plant trees in memory, please visit the Sympathy Store.
MEMORIAL EVENTS
To offer your sympathy during this difficult time, you can now have memorial trees planted in a National Forest in memory of your loved one.
Funeral services provided by:
Flinn & Maguire Funeral Home - Franklin
MEMORIES & CONDOLENCES
Sponsored by Flinn & Maguire Funeral Home - Franklin.
2 Entries
As the days and weeks pass, and as you return to life's routine, may you continue to feel comforted by the love and support of family and friends. Jane was a friend to all she met. She was missed when she moved from her Southern home in Sarasota, Fl back to Indiana. She always had time to visit with her neighbors and pass on a little sunshine with her smile. She will be missed.
Marv & Ellen Jackson
Friend
October 31, 2021
Brad, Becky and family, sorry to hear your mother has past. I did not have the opportunity to meet her but her obituary says a lot about her and her kindness. She will be missed by many.
Dianne(Foster) Pfennig
Dianne Pfennig
Friend
October 21, 2021
Showing 1 - 2 of 2 results