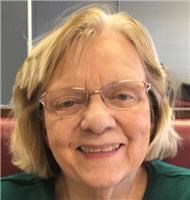 ABOUT
Blacksburg High School
FUNERAL HOME
CECIL M. BURTON FUNERAL HOME and CREMATORY - Shelby
106 CHERRYVILLE RD.
Shelby, NC
GROVER - Jean Frances Harry Francis was born July 1, 1934 to Franklin and Estelle (Stell) Harry of Grover, NC. and passed away on July 21, 2020. Jean is survived by her two children, Philip Francis (Becky Nichols) and Debbie Francis (Deborah Tapley), her two brothers, Jim Harry (Shirley) of Gastonia and John Harry (Pat) of Grover. She was Aunt Jean to many nephews, nieces, and their children. Her extended family consisted of many cherished cousins and friends who were loved like they were kin. She was predeceased by her brother Charlie Harry and his wife Ann, and nephews Jay Harry and Allen Phillips.

Always a "Grover girl", Jean loved her hometown and the people that lived there. She loved Grover and she loved to talk about living in Grover as a young girl. The "Mill", Minette Mills and Grover Industries, was a part of her family life. As a young adult she became active in the Women's Club, Grover School, and was often involved in a variety of community events. She served as President of the Women's Club and chaired the committee that published the first Grover Women's Club Cookbook.

Jean was a lifelong member of Shiloh Presbyterian Church serving as organist during her later years. Playing the organ was her joy and consternation. Having played the piano her whole life, she tackled the organ for the church. The congregation as always grateful, even on those Sundays when a stray note or two were played. She served the church in many capacities and was willing to do whatever was needed.

Mid-life Jean decided to go back to school. With no children at home, she first tackled technical school at Cleveland Community College. Before she could graduate, she was offered a job there. That began a career of almost 40 years. During this time, she decided to attend Limestone College and received her Bachelor of Science degree in 1983. She continued her education at the University of South Carolina and received her Master's Degree. She was quite proud of her academic accomplishments, making sure her children knew she was a straight A student! While in College, she continued working at Cleveland Community College first as a bookkeeper, then as an instructor and eventually she became Dean, Arts/Sciences/Public Services. She loved teaching and loved interacting with her students who she would often hear from or see in the local communities. She was recognized for her teaching prowess when she received the Excellence in Teaching Award in 1994. She took great satisfaction in helping others learn.
Jean was a member of the Pathways and later, CODAP Boards. She believed strongly in the mission of these agencies and was recognized as the Volunteer of the Year by the organization.

Upon retiring from CCC, Jean found great joy in her friends and her re-connection with her fellow Blacksburg High School graduates. Her monthly dinners with "The Neighborhood" were so much fun, telling tales and catching up.
The last five years took Jean on a different journey. Her family is grateful for the caring staff and wonderful care she received while residing at Givens Estate in Asheville, Brookdale in Shelby and Summitt Place of Kings Mountain. She met many wonderful people that enhanced her life during these later years.

Jean will be laid to rest in a private graveside service on Saturday, August 1 at 9:30 in the Grover Cemetery. Visitation will follow at 10 at Shiloh Presbyterian Church in Grover. Funeral Services will be held at the church at 11. Social distancing and masks will be required as the family is very concerned for the health and well being of their friends and family.

Guest Registry is available at www.cecilmburtonfuneralhome.com
Published by Shelby Star on Jul. 29, 2020.
To plant trees in memory, please visit the Sympathy Store.
MEMORIAL EVENTS
Aug
1
Visitation
10:00a.m.
Shiloh Presbyterian Church
Grover, NC
Aug
1
Funeral service
11:00a.m.
Shiloh Presbyterian Church
Grover, NC
Aug
1
Graveside service
9:30a.m.
Grover Cemetery
IL
Funeral services provided by:
CECIL M. BURTON FUNERAL HOME and CREMATORY - Shelby
MAKE A DONATION
Please consider a donation as requested by the family.
MEMORIES & CONDOLENCES
Sponsored by CECIL M. BURTON FUNERAL HOME and CREMATORY - Shelby.
8 Entries
I just learned of Jean's death and had to respond. Jean was a wonderful person and a good friend. I knew her best in the 80's when I was her pastor. Jean's favorite topic of conversation was her children, Phillip and Debbie. She meant the world to Shiloh, Grover, and Cleveland County Community College, too. She will be greatly missed, but her kind and generous spirit will live on in our memories.
Harold Hutchison
Friend
January 27, 2021
There are those teachers that you often reflect over the years on the memories of how you appreciated them. Ms. Jean Francis was one of those for me. I really appreciated her and found her to be not only a great teacher but a friend while getting my education. My deepest sympathy to the ones that have lost a wonderful family member. You are in my thoughts and prayers during this time.
Shannon Price
August 4, 2020
Jean "hired" me as an adjunct English teacher the summer after retirement in 2000. I stopped in (flip flops, jeans and T-shirt) to get an application for teaching maybe one night class and came out with two day classes on my schedule! My attire never seemed to bother her. I always looked forward to seeing her as I passed through the education office because she was always friendly and asked how I was doing and what I needed. She definitely made the post-retirement phase of my life fulfilling!
Joyce Gardner
Teacher
August 2, 2020
Jean was always a friend and fellow faculty member. Loved talking to her. She loved Grover and the Cleveland County Area. She had wonderful stories about the history of the area. She was deeply involved with the community and Cleveland County. Not being from here, and recently retired from military, she was always a great go to source for anything I needed and wanted to know. She was friendly with smile, and always had time to help for new faculty members. She was a dear friend, and she will be missed. Prayers for the family during this time of great loss.
Frank T. Polk
Coworker
July 30, 2020
Mrs. Francis was one of my favorite teachers at CCC. I took as many classes as I could from her. She was a compassionate with her students and I learned a lot from those classes. Sending prayers, rest easy
Jennifer Harris
Student
July 29, 2020
To all the Francis and Harry Families,
We were very saddened to learn of Jean’s death. She was a fine Christian person and very instrumental in the formative Christian years in the lives of the Strain, Rountree, Morgan, and other Shiloh children. As a Sunday school teacher and deep Believer in Christ, she taught us all. Our thoughts and prayers, in Christ, are with you all, during this time.
Bee/Martha and the Strain Family
Bee Strain
Friend
July 29, 2020
Mrs. Francis was an incredible lady. I had her for classes at CCC, and she was so much more than a teacher to me. I cried many times on her shoulder, and she would give me advice on how to deal with life as a young person. I will be eternally grateful to her, and to God, for what she instilled in my life.
Acorea Sims
Student
July 28, 2020
Sending my condolences and praying for strength and healing .
Monique Gaston
Friend
July 25, 2020
Showing 1 - 8 of 8 results