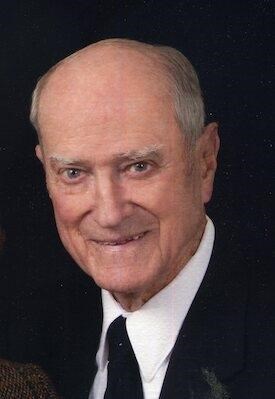 Homer, LA - CARRELL G. DOWIES, JR. was born in Arcadia, LA on February 23, 1928 to C.G. Dowies, Sr. and Lenora Austin Dowies. Carrell graduated from Homer High School in 1945. He attended LA Tech University on a football scholarship, lettering all 4 years and graduating from Louisiana Tech in 1949.

After his career at LA Tech, he moved back to Homer to work at the Homer National Bank and Planters Bank and Trust. When the opportunity opened, he purchased Homer Tobacco Candy and Drug Company and developed a special bond with customers across North Louisiana.

Because of Dad's long time service for LA Tech, he was honored to have been awarded Alumnus of the Year and the Tower Medallion.

Dad's greatest impact throughout his life was his family. He was Jr., Bubba, Husband, Dad, and Grandy. His family time ranged from bream fishing trips on Saline Lake to vacationing in Destin, Florida to following his grandchildren, Maggie and Stephen thru their school sporting careers.

Family, Church, LA Tech and Claiborne Parish were his passion, along with the many people he touched throughout his life.

Carrell was preceded in death by his parents, his sister, Dorothy Jean Dowies, his brother, Jim Dowies and his in-laws Nelson and Ruth Michaud.

Published by Shreveport Times from Jul. 21 to Jul. 24, 2021.
To plant trees in memory, please visit our Sympathy Store.
MEMORIAL EVENTS
Jul
23
Visitation
12:30p.m. - 2:00p.m.
the First United Methodist Church
Homer, LA
Jul
23
Celebration of Life
2:00p.m.
First United Methodist Church
Homer, LA
Funeral services provided by:
Rose-Neath Funeral Home
MAKE A DONATION
MEMORIES & CONDOLENCES
Sponsored by Rose-Neath Funeral Home Homer Chapel.
6 Entries
So sorry for your loss - my Family is Praying for you family ... God Bless
Dan & Charlotte Richardson
July 24, 2021
Prayers go out to all of family. My condolences
Dianna Jarvis
July 23, 2021
I had the esteem pleasure Of being a student of his At LCHS. HE DID A GREAT JOB FOR STUDENTS AT LCHS. GOD BLESS.
Mike Guzman
Friend
July 22, 2021
Dear Harriett: May the Lord bless you and comfort you and yours until you are reunited together in heaven with Carrell. Phil 4:7 "And the peace of God which transcends all understanding will guard your hearts and minds in Christ Jesus "
Marteil Michaud
July 22, 2021
Thank you Coach Dowies for your leadership and encouragement while at JHHS.
Ed and Brenda Michaud
Family
July 22, 2021
Dear Harriett & Family; Gwen and I are very saddened to learn of Carrell's passing. He was a great coach, teacher and a well respected gentlemen. He touched and influenced the lives of so many young students and athletes. Carrell will be greatly missed by so many of us who really knew first hand the great man that he was. We offer our prayers and our sincerest condolences. We will stay in-touch. Love always, Carroll & Gwen Michaud
Carroll R & Gwendolyn M. Michaud
Family
July 22, 2021
Showing 1 - 6 of 6 results