Services celebrating the life of Frank Page will be held at 11am on Tuesday, January 15, 2013 at Rose- Neath Funeral Home Marshall Street Chapel. Officiating the service will be, Bro. James Duncan of Hickory Hill Baptist Church, Avinger, TX. Interment will follow at Forest Park St. Vincent Avenue. The family will receive friends at the funeral home, on Monday January 14, 2013 from 4pm to 7pm.

Raymond Franklin Page passed away on Wednesday, January 9, 2013 after a brief illness. He is survived by; his wife of 68 years, Helen Louise Hulett Page, their daughter, Patti Lea Page Stephens, and her husband Ronald W. Stephens, grandson, Christopher P. Stephens, all of Littleton, CO, brother, Larry E. Page and his wife MaryAnn of Shreveport, LA.

Frank was born July 16, 1925 in Malvern, Arkansas. He was the son of Raymond Foster Page and Stella Irene Coston Page. He attended school in Harlingen, Texas; Malvern, Arkansas and North Little Rock, Arkansas. Frank proudly served his country in the United States Army during WWII.

Frank and Helen moved to Shreveport on Thanksgiving Day 1947. He had a storied career in radio with KWKH of 58 years. He was involved in the "Louisiana Hayride" from 1949 to 1960. He was associated with the "Greats" of Country Music and Rock & Roll. He is known best for having first introduced Elvis Presley to an international audience. The recording of that introduction has been released in album form in 25 languages. He received countless awards and recognition included being inducted into the Shreveport Walk of Stars. Frank loved Radio, his audience, and was affectionately known as "Mr. KWKH" and the "Dean of Shreveport Radio". A book, "Frank & Helen Page: A Lifetime at KWKH" was published in 2007, which chronicled their life together.

The family suggests that memorials may be made to the American Heart Association, 745 Olive Street Shreveport, LA 71101, The Wounded Warrier Project, www.woundedwarriorproject.org or to the charity of the donor's choice.

To plant trees in memory, please visit our Sympathy Store.
Published by Shreveport Times from Jan. 12 to Jan. 14, 2013.
MEMORIAL EVENTS
No memorial events are currently scheduled.
To offer your sympathy during this difficult time, you can now have memorial trees planted in a National Forest in memory of your loved one.
Funeral services provided by:
Rose-Neath Funeral Home-Shreveport
MAKE A DONATION
Please consider a donation as requested by the family.
MEMORIES & CONDOLENCES
19 Entries
Mr. Page was one of the most humble gracious men I have ever met. I only met him once, and only by chance but it was like he never knew a stranger. We were at James Burton's place on the Riverfront... and came in to hear that familar music.... I never knew someone of his generation to really enjoy RockNRoll.... his foot tapped and tapped... Wonderful memories. He and Elvis and many other "musical" world people are playing for God now.... what a reunion.
Henrietta Corley
January 18, 2013
Homesick in Houston, Tx back in 1976, but early one morning discovered I could tune in to KWKH on my little kitchen radio listen to Frank Page.. Felt like home.. Years later I was thrill to be able to shared this memory with Mr. Page..He'll be missed by many..
LeVerne Kidd
January 15, 2013
Had the privilege to work with Frank in 1979. A rare prince in a sea of piranhas.
Steve Lewis
January 14, 2013
What a great guy, Frank was, my thoughts and prayers are with the family. I was lucky enough to have known and worked with him.
Mark Christopher Pizzolato
January 14, 2013
I always looked forward to visiting with Mr. Frank during the time I worked with him at the Radio Mall. His kind words, gentle nature, and keen humor will be missed by all who knew him. What a sweet, sweet man.
Tammy Jo Brown-Pusloskie
January 13, 2013
Growing up in the "KWKH family" was a unique and wonderful experience that included knowing Frank Page all my life. My Dad was sound engineer at KWKH for nearly 40 years. Every Saturday night during the Louisiana Hayride days, Frank Page and Jack Jones made sure faithful KWKH fans, especially my Mother, Doris Jones (always seated front and center!), received the great show they deserved. Mr. Frank and Mrs. Helen are dear friends whose friendship has continued throughout our lifetimes. Frank always had a smile, was always willing to share his very interesting life story, and was a genuine friend. It has been a blessing to have shared life's journey with him.
George & Yvonne Jones
January 13, 2013
While working with Frank at KWKH, I asked him how he was able to stay a man of integrity all those years, in a world that didn't always encourage it. His answer was simple: It was his faith in God. RIP Frank, you've earned your heavenly reward. My deepest sympathy goes out to his family.
Mary Mann Serra
January 13, 2013
I grew listening to YOU & KWKH! May God
continue to bless your family always!
Richard McComic
January 12, 2013
May your memories of the wonderful times you shared with your loved one comfort you and your family, today and always.
American Heart Association
January 12, 2013
elinor wilson horton
January 12, 2013
Frank was a great man and a true legend he will be missed by many. My prayers are with the family. My late father Johnny considered him a good friend.
Mike Maniscalco
January 12, 2013 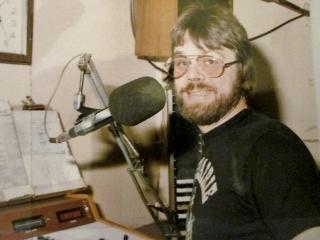 Frank; for the brief time I worked with you in radio, I appreciate the fact, you didn't let your 'ego' get in the way. As one veteran to another, I salute you and God bless you!
Scott Johnson
January 12, 2013
Patti I am sorry for your loss
Liz Sealy Lenoir
January 12, 2013
MR. FRANK ----ONE OF THE GREATEST, NICEST, MOST THOUGHTFUL MEN I HAVE EVER KNOWN. I WAS PRIVILEGED TO BE ON OF HIS CUSTOMERS FOR 25 YEARS. HE ALWAYS LOOKED AFTER MY INTERESTS AS IF THEY WERE HIS. I WILL SURELY MISS HIM.
MIKE WRIGHT
MIKE WRIGHT
January 12, 2013
Mr. Frank was our wonderful neighbor for 50 plus years. He would give us tickets to the Hayride and he was always very kind. I will miss seeing him out working in his immaculate yard. He was truly one of the greatest. My thoughts and prayers are with his family. Sheila Evanoff Greer
January 12, 2013
What a great guy he was, I met him when I was sixteen when I was trying to get into broadcasting ,and was lucky enough to have worked with him at KWKH,when I was nineteen. He was always the nicest guy,and he will be missed.
Mark Christopher Pizzolato
January 12, 2013
My condolences to the Page family.
Jerry Bufkin
January 12, 2013
Some of the sweetest people I have ever met! Helen and Patty I am praying for you during this sad time. Patty I have missed staying connected with you! Love and hugs. Julia Crawford Walker
Julia Walker
January 12, 2013
The Final Salute

This “Hand Salute” is the last that we shall render to Raymond Franklin (Frank) Page our “Brother-in-Arms”. To his family it symbolizes the love and respect that we have for Frank. And to Frank it is rendered as a symbol of honor and gratitude to thank him for the devoted and selfless service he rendered to his country during WW-II while serving in the U.S. Army. Frank, you are a true patriot, who served with honor and distinction. You upheld the finest qualities of an American patriot warrior: courage, commitment, generosity, sacrifice, love and devotion to family and country. We bid you a sad farewell. You will be dearly missed from among our ranks. Be at Ease. Rest in Peace.

On behalf of the 1,261 military veteran Legionnaires of Lowe-McFarlane Post 14 of the American Legion, I extend our sympathies and our condolences to Frank's family and loved ones.