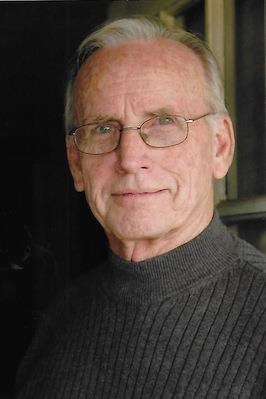 A Memorial Mass will be held for Ron Rice on Saturday, June 26 at 10:30 a.m. at St. Joseph Catholic Church, 204 Patton Avenue, Shreveport, LA. The family will receive friends in the gathering space of the church from 9:15 to 10:15. The celebrant for the Mass will be Ron's devoted uncle, Msgr. Earl V. Provenza, V. F.

Mr. Ronald Maburn Rice, 88, passed away on Monday, March 15, 2021 at home after a lengthy illness with both Alzheimer's and Parkinson's Diseases. Ron Rice was a most loving and kind husband, father, grandfather, and friend. He had an unending love for his children, grandchildren, and his extended family. He was always quick to share his artistic talent to assist anyone with an art project - from high school campaign posters for his nieces and nephews to art renderings of local Catholic churches and anything for his alma maters Fair Park High School or Centenary College.

By profession Ron Rice was an artist for almost sixty years until the onset of Alzheimer's prevented him from creating his art. He worked in almost every medium of commercial art. He began his career in Dallas, Texas where he worked in an animation studio, at the Dallas Times Herald, and at WFAA TV. Later he worked in art and marketing departments of local television, newspaper, outdoor advertising, and independent art studios. He was the graphic artist for both local newspapers - first at The Shreveport Journal and then he retired from The Times in 1998. During his entire professional career, he was also a free-lance artist and was commissioned for countless caricatures of individuals, families, athletes, and professional leaders of Shreveport and Bossier City. His caricatures were always treasured by the recipients for the humorous detail that he incorporated into each rendering. Of all the art work that he produced, he was probably most proud of his originals and prints of his beloved LSU Tigers in both football and baseball. He produced a series of illustrations featuring the LSU Tiger with his various opposing team mascots in cartoon situations with "Tiger Bait" being his most popular print. His last major art project was a series of Biblical learning cards with his friend, Rev. William E. "Wishy" Nolan. The first set of cards featured Jesus and the apostles with scripture references. Due to widespread interest, additional sets of playing/learning cards featured other men and women of the Old and New Testaments. Ron's art work is now being archived in the Archives and Special Collections of Noel Memorial Library at LSUS where his lifetime art work will be preserved and available for research purposes to all art lovers and historians for generations.

Although Ron Rice's profession was an artist, his true love was his volunteer coaching of baseball for almost fifty years. He coached every age group from Little League to American Legion. Coach Rice was admired and loved by his players and maintained lifelong friendships with many of them. He ended his coaching career as the coach of freshmen ballplayers at Captain Shreve High School in 2002. He was an accomplished athlete and still holds the state record for the longest touchdown in high school football while he was a student at Fair Park High School in 1950. Upon graduation from Fair Park, he attended Centenary College on a baseball scholarship. He signed a contract to play professional baseball with the Shreveport Sports in 1954. He also played baseball in the Panama Canal Zone for two years while he was in the Army.

Mr. Rice was born in Waco, Texas on January 31, 1933 and moved with his family to Shreveport, LA in 1937. He attended Judson and Queensborough public schools and graduated from Fair Park High School in 1951. He attended Centenary College and Ringling Art School in Sarasota, FL. He was a member of St. Joseph Catholic Church where he was a member of the Men's Fellowship, and he served on the Church Renovation and Rededication Committee in 2007-08.

The family would like to express their appreciation to Ron's kind and loving caregivers Wanda Whitehurst Williams, Bessie Holden, Tona Chrisman, and Rolanda Hall and to all the health care providers who assisted on this long journey.


Published by Shreveport Times from Jun. 16 to Jun. 25, 2021.
To plant trees in memory, please visit the Sympathy Store.
MEMORIAL EVENTS
Jun
26
Visitation
9:15a.m. - 10:15a.m.
St. Joseph Catholic Church
204 Patton Avenue, Shreveport, LA
Jun
26
Memorial Mass
10:30a.m.
St. Joseph Catholic Church
204 Patton Avenue, Shreveport, LA
MAKE A DONATION
Please consider a donation as requested by the family.
MEMORIES & CONDOLENCES
Sponsored by Shreveport Times.
3 Entries
Angelina, sending loving thoughts and prayers to you and your family, Mike and I are so sorry for your loss.
Debbie Schofield
June 27, 2021
Prayers and love to you at this sad time. Many fond memories of you and family!!
Agnes Dice
June 24, 2021
The Final Salute

“Brothers and Sisters in Arms”, Military men and women down through the centuries, have traditionally exchanged “Hand Salutes” as a sign of recognition and as a way to render courtesy and respect one to another.

This “Hand Salute” is the last that we shall render to Ron Rice our “Brother-in-Arms”. To his family it symbolizes the love and respect that we have for Ron. And to Ron it is rendered as a symbol of honor and gratitude to thank him for the devoted and selfless service he rendered to his country during the Korean War while serving in the U.S. Army. Ron, we commend you for your honorable military service, but we also commend you for your many years of coaching American Legion baseball teams. You are a true patriot, who served with honor and distinction. You upheld the finest qualities of an American patriot warrior: courage, commitment, generosity, sacrifice, love and devotion to family and country. We bid you a sad farewell. You will be dearly missed from among our ranks. Be at Ease. Rest in Peace.

On behalf of the 881 military veteran Legionnaires of Lowe-McFarlane Post 14 of the American Legion and the 121 veterans of VFW Post 2238 in Shreveport, Louisiana, we extend our sympathies and our condolences to Ron’s family and loved ones.