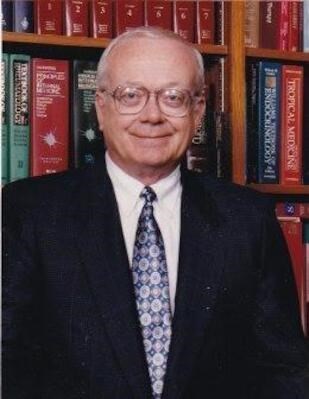 Dr. Ron George was Professor Emeritus of Medicine and former Chairman of the Department of Medicine at Louisiana State University School of Medicine, Shreveport. He excelled in many areas in the field of medicine, including his skills as a physician of chest medicine, an outstanding teacher, a successful clinical investigator, an author, and an adroit administrator.

He was an outstanding clinician and was a nationally recognized leader in the field of pulmonary diseases. He had a special gift for diagnosing difficult lung disease cases and was constantly sought out by residents, staff, and physicians around the area for his help with patients. He was a visiting professor at many academic institutions throughout the country.

He was a great teacher winning several major teaching awards and trained over 75 fellows, many of whom are still in practice across the nation. He was always popular with students and really enjoyed the stimulation of young people—he always appeared to be surrounded by a group of students, residents, and fellows.

He was recruited from Tulane University to LSU in Shreveport in 1972 where he founded the Pulmonary and Critical Care Division and then served as Chief for many years. He was appointed Chairman of the Department of Medicine in 1992 and served in this capacity for several years.

He was a prolific writer, authoring over 200 manuscripts, books, and book chapters, including one of the most successful pulmonary textbooks of all times, Chest Medicine, now in its 5th edition. He had special expertise and conducted clinical studies involving fungal diseases of the lung, tuberculosis, COPD, smoking cessation, and asthma.

Every year, one of the most prominent, nationally known pulmonary & critical care physicians is invited to LSU to speak at Grand Rounds and a dinner is held in his or her honor. Dr. George founded the event in 1987 to honor George Meneely, one of the founders of LSU Medical School in Shreveport, and it has been an annual tradition ever since. The event was renamed several years later to the Meneely/George lectureship to honor Dr. George as well.

Dr. George earned a Bachelor of Arts from the University of Alabama and a Doctor of Medicine at Tulane University School of Medicine. He was a member of Alpha Tau Omega fraternity. He also served in the United States Air Force in Misawa, Japan.

Ron George was an avid reader and crossword puzzler. He collected pottery and enjoyed cooking and creating new recipes. He had the opportunity to travel all over the world sharing his expertise in pulmonology at medical conferences.

He is survived by his sister Joan George Kane, niece Kathy Kane, nephews Bryan (Suellen) and George Kane, and great-nephews Michael (Megan) and Chris (Daisy) Kane. He is preceded in death by his parents Theo Virginia Baylis George and Ronald Lee George. The family also wishes to recognize Dick Jamison, one of Ron's best friends for 50 years.

Funeral services were private; a gathering of family and friends to celebrate Ron's life will be scheduled at a future date.

Should anyone wish to make a memorial donation, the family suggests a contribution to a scholarship fund established in his honor would be most meaningful: Dr. Ronald George Scholarship Fund, LSU Health Sciences Foundation, 920 Pierremont Road, Suite 506, Shreveport, LA, 71106, or online at www.lsuhsfoundation.org/wcsc


Published by Shreveport Times from Jul. 23 to Jul. 25, 2021.
To plant trees in memory, please visit our Sympathy Store.
MEMORIAL EVENTS
To offer your sympathy during this difficult time, you can now have memorial trees planted in a National Forest in memory of your loved one.
MAKE A DONATION
MEMORIES & CONDOLENCES
Sponsored by Shreveport Times.
7 Entries
Dr. George was very special to my husband and was the reason he chose to become a Pulmonologist. We are so very sorry to hear of his passing. We are praying for your family.
Dr. and Mrs. Manley Jordan
School
August 3, 2021
My deepest sympathies to his family for their lose. I can't express may grief at the lost of 'Chief'. Dr. George saw something in me that nobody, including myself, saw and then gave me a rare and precious opportunity. Not only myself but my family and countless patients have benefitted from his insight. He wasn't just a physician and scholar. He taught much, much more. He had a calm way of guiding a misguided thought. He praised and pointed out subtle points one identified. He gave credit graciously and was gentle in corrections. He taught us a commitment to excellence, a yearning for knowledge, a commitment to constant learning and compassion for those suffering from dis-ease and disease. Yet, those were just the professional lesson. He taught manners, grace, appreciation for the world around us and all it offered. He is one of the most influential men in my life. I am so thankful to be one of those blessed to be trained, mentored and guided by him. I will miss you Chief.
Clement W. Fox, MD
Friend
July 28, 2021
To "Ronnie's" family of whom he was so proudly related, He was a wonderful friend, physician, teacher, who left his mark on those things he treasured, medicine, teaching, contributing to worthy causes . He will be sorely missed.
William M. Wilder,M.D.
July 27, 2021
Our condolences to the family of Ron George. We have serviced his appliances for many years and are very sorry for the loss of a great guy. Our thoughts and prayers are with all of his family and especially for his beloved sister. He thought the world of you and told me so. Loved the time spent with you
Marty and Diane, Watson´s Appliance Service
July 26, 2021
Ronnie was a special man loved by all here in Lakeshore Dr.we will not forget what a social friend he was Rest in piece Ron Love MJ
Mary Jane Conwell
Friend
July 25, 2021
The Final Salute "Brothers and Sisters-in-Arms", Military men and women down through the centuries, have traditionally exchanged "Hand Salutes" as a sign of recognition and as a way to render courtesy and respect one to another. This "Hand Salute" is the last that we shall render to Ronald Baylis George, MD our "Brother-in-Arms". To his family it symbolizes the love and respect that we have for Dr. George. To Dr. George it is rendered as a symbol of honor and gratitude to thank him for the devoted and selfless service he rendered to his country while serving as a medical doctor in the U.S. Air Force . Dr. George, we commend you for your honorable military service and more jmportantly for your distinguished career as an educator and leader in the medical profession. You are a true patriot, who served your nation, your community and your profession with honor and distinction. You upheld the finest qualities of an American patriot warrior: courage, commitment, generosity, sacrifice, love and devotion to family and country. You were a true friend. We bid you a sad farewell. You will be dearly missed from among our ranks. GOD Bless you. Be at Ease. Rest in Peace. On behalf of the military veteran Legionnaires of Lowe-McFarlane Post 14 of the American Legion, the VFW Comrades of Post 4588 and the Disabled Veterans of DAV Chapter 30 in Shreveport and Bossier City, Louisiana, we extend our sympathies and our condolences to Dr. George´s family and loved ones. Josh Schools, Commander, American Legion Post 14 5315 South Lakeshore Drive, Shreveport, LA 71109 Ron Delaney, Commander, VFW Post 4588 1004 Jeter Street, Bossier City, LA 71111 Johnny Welch, Commander DAV, Chpt 30 7012 Suntan St. Shreveport, LA 71108 For the Commanders, Carroll R. Michaud
Carroll R. Michaud
July 25, 2021
Lilly and I were saddened to hear of the passing of such a fine person who had a profound positive influence on so many including myself.
William Matthews MD
Friend
July 24, 2021
Showing 1 - 7 of 7 results