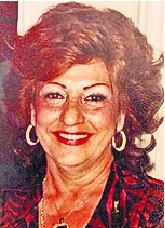 ABOUT
New Dorp High School
FUNERAL HOME
A. Azzara Funeral Home - Staten Island
183 Sand Lane
Staten Island, NY
Angela Gardner, 77
Native Staten Islander, loving matriarch
Angela Gardner (nee Rivela), 77, passed away at home on Sunday, January 5, 2020.
Born and raised in South Beach, Angela graduated from New Dorp High School. She worked most of her career as a secretary, first in Manhattan and then at the South Beach Psychiatric Center. She was also responsible for education and training there, retiring in 1988. Angela also served as president of her family's tile business, "Gardner Tile and Terrazzo" on Staten Island.
Angela enjoyed trips to Atlantic City and vacationing with her grandchildren in Aruba, Las Vegas and Italy, as well as cruises to The Bahamas and The Cayman Islands. She was a longtime parishioner of Holy Rosary Church in South Beach.
Angela was the loving matriarch of the family. She cared for everyone and made everyone feel at home. She was always dressed to the 9's and was the ultimate host. She also remained a strong woman, even when faced with terrible tragedies in her life.
"Angela grieved the loss of her beloved son, Richard, who was only 25 years old when he passed away in 1995," said her family. "Angela's heart would never fully heal again, but her love for family helped her everyday."
Angela Gardner was the beloved wife of 49 years of the late Richard Sr., who passed in 2013; loving mother of Lisa Bonici and her husband Steven, and the late Richard Jr. She was the adored grandmother of Melissa, Danielle and Richard and great-grandson Mikhael. She is also survived by her dear sister, Frances Conkling and her many dear nieces, nephews, cousins and friends.
A. Azzara Funeral Home, 183 Sand Lane, South Beach, has been entrusted with Mrs. Gardner's funeral arrangements, which include a visiting Tuesday and Wednesday from 2 to 4 p.m. and 7 to 9 p.m. Funeral Mass will be on Thursday at 9:30 a.m. at Holy Rosary Church. Interment will follow at St. Mary's Cemetery.