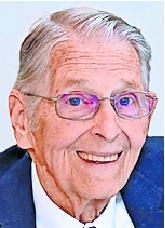 BORN
1931
DIED
2018
FUNERAL HOME
Harmon Funeral Home
571 Forest Ave
Staten Island, NY
Donald Charles Semon Sr., 86
Navy veteran, Giants fan, had a career at International Nickel
Donald C. "Don" Semon Sr., 86, of Castleton Corners, passed away on Monday, Oct. 22, 2018, at Richmond University Medical Center.
Don was proud to be a native Staten Islander and spent his formative years in Stapleton. Born on Dec. 26, 1931, to Fred and Rosalie Semon (nee McDermott), he was baptized at Immaculate Conception Church, which was built by his grandfather, William J. McDermott.
A graduate of St. Peter's High School, Class of 1949, Don attended Fordham University and received his baccalaureate degree in marketing from New York University. He pursued his graduate-level studies in marketing at the City University of New York-Baruch College. He served four years in the U.S. Navy.
Don's professional career of 44 years with the International Nickel Company (INCO) began in the traffic department. Throughout his career, he was selected for key positions in the organization, including manager, precious metal sales, involving commercial duties with Japan, culminating at his retirement as the director, administration and distribution of precious metals.
An avid baseball and football fan, his favorite team was the New York Giants. Don enjoyed coaching his children in baseball and basketball when they attended St. Teresa's elementary school. He was a third degree Knight of Columbus, Richmond Council 351, a member of the American Legion, and St. Teresa's Holy Name Society.
Don cherished spending time with his family, especially his grandchildren. He was grateful to God for all the blessings of his life, but most especially to have been given the opportunity to help his daughter, Maureen, raise her sons, Sean and Brian Kuechenmeister.
He is survived by his beloved wife of 60 years, Marian Semon (nee Muzzy); his four children, Donald C. Semon Jr. (Mary Anne), Kenneth Semon (Patricia), Patricia Buttermark, Maureen Kuechenmeister; nine grandchildren and one great-grandchild. He was predeceased by his brother, Fred.
A Mass of Christian Burial will be celebrated at 10:45 a.m. Saturday, Oct. 27, at Church of the Holy Family, 366 Watchogue Rd.,Willowbrook. Interment will follow at St. Peter's Cemetery on Clove Road in West Brighton.