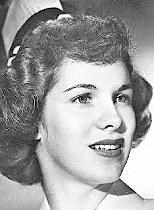 BORN
1928
DIED
2017
FUNERAL HOME
O'Neill-Hayes Funeral Home - Newport
465 Spring St.
Newport, RI
Edith Lamprey Milnes
Raised her family in Great Kills, avid swimmer and sailor
Edith Margaret Lamprey Milnes of Middletown, R.I., entered into eternal peace on Sunday, Dec. 17, 2017, in Newport, R.I. The past few years of her life were spent living with Alzheimer's disease, which she handled bravely and with humor.
Her beloved husband of 50 years, Peter Albert Milnes, predeceased her in 1999. She leaves her daughter and son-in-law, Lori and Dr. Jim Dobbin; her daughter, Sue Wallace; her daughter and son-in-law, Michelle and Matthew Kirby; her son and daughter-in-law, Scott and Dedee Milnes - all of Middletown, R.I.; and her son and daughter-in-law, Peter and Nancy Milnes of Middletown, N.J.
She is also survived by her sister, Connie Reschke of Tribe's Hill, N.Y. , and her treasured grandchildren, Matthew, Katie and Ted Dobbin; Lucy, Peter and Gordon Wallace; Matthew and Oliver Kirby; Pete and Haley Milnes; and Olivia, Sam, Courtenay, Henry, and Gwen Milnes. Edith also loved and cared for four dogs during her life: Pal, Archie, Willie, and Holly.
Edith was born in Hyannis, Mass., in 1928. She moved to Staten Island, N.Y., as a teenager and proudly graduated from St. Luke's School of Nursing in New York City in 1951. Edith and Pete eventually moved their family from Great Kills, Staten Island, and settled in Middletown in 1981. She practiced nursing in various specialties, including labor and delivery, emergency room, methadone treatment, and school nursing.
When she no longer worked professionally she found ways to continue helping others through various volunteer organizations, including Newport Hospital's Compassionate Care services, Meals on Wheels, Visiting Nurses, the Maher Center, and Sail Newport.
A love for the sea was a common thread throughout her life. Edith was born on a houseboat to a Cape Cod fisherman, and after marrying she and her husband Pete found their love of sailing at Richmond County Yacht Club on Staten Island. She loved crewing and racing sailboats with Pete and eventually became her family's biggest cheerleader during regattas.
Edith and Pete were longtime members of Newport's Ida Lewis Yacht Club, where she enthusiastically gave her time volunteering at regattas. Edith was an avid swimmer and especially loved doing laps at Third Beach, oftentimes well into October. Her other passions included playing bridge, knitting, and tending to her vegetable gardens.
Edith loved her family deeply and was in turn cherished by them and many of their friends.
In lieu of flowers, Edith requested that donations be made to either The Alzheimer's Association, R.I. Chapter, 245 Waterman St., Suite 306, Providence, R.I. 02906, or Visiting Nurse Home & Hospice, 1184 East Main Rd., Portsmouth, R.I. 02871.
Funeral and burial services are private and are being arranged by O'Neill-Hayes Funeral Home. For more information and online condolences, please visit www.oneillhayes.com.
O'Neill-Hayes Funeral Home
465 Spring St.
Newport, R.I. 02840
(401) 846-0932
Published by Staten Island Advance on Dec. 20, 2017.
MEMORIAL EVENTS
To offer your sympathy during this difficult time, you can now have memorial trees planted in a National Forest in memory of your loved one.
Funeral services provided by:
O'Neill-Hayes Funeral Home - Newport
MAKE A DONATION
Please consider a donation as requested by the family.
MEMORIES & CONDOLENCES
Sponsored by O'Neill-Hayes Funeral Home - Newport.
1 Entry
I have such great memories of both Edie and Pete, having crewed for them for years at the Richmond County Yacht Club. As a teenager they were a big part of my early years. My sincere condolences.
Rick Thompson
December 20, 2017
Showing 1 - 1 of 1 results