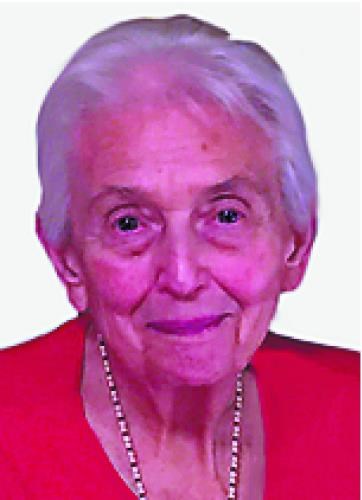 FUNERAL HOME
Casey McCallum Rice South Shore Funeral Home
30 Nelson Avenue
Staten Island, NY
Evelyn K. McCool, 94
Beloved mother of seven, hosted 'epic' 4th of July picnics
Evelyn K. McCool, age 94, of Staten Island, NY, passed away on Friday, April 2, 2021.
Evelyn was born in Long Island City, Queens, and lived in Woodside before moving to Eltingville in 1955. Prior to becoming a homemaker, she worked as a secretary for the American Mutual Liability Insurance Company. She was married for 50 years to Joseph (Mickey) McCool who predeceased her.
Her hobbies included reading, bird watching, traveling and collecting cookbooks and recipes. But her most enjoyment came from being surrounded by her family. She was famous for her Czech and Italian cuisine and she always had room at the table for one more. She and her husband also hosted many epic Fourth of July picnics for family and friends.
For many years she served as an Inspector for the Board of Elections and was a volunteer at Saint Clare's as a class mother and in the school library as well as the rectory.
She was the loving mother to her seven children and loving mother-in-law to their spouses - Janet Messina (Samuel), Terrence McCool (Bernadette), Karen Mogensen (Jan), Ellen McCool, Timothy McCool (Joan), Steven McCool (Denise), and Michael McCool (Jeannette Day).
She was beloved Gram to her seven grandchildren and their spouses, Tracy Romano (Vincent), Valerie Root (Richard), Matthew Messina (who predeceased her), Ian McCool, Brian McCool, Erin McCool, and Daniel McCool; she was also treasured GG to her seven great-grandchildren Caleb Root, Micah Root, Seamus Root, Bodie Root, Enzo Romano, Rafael Romano and Lydia Romano.
She was a cherished Aunt to her many nieces and nephews.
A visitation for Evelyn will be held Tuesday, April 6, 2021 from 4:00 PM to 8:00 PM at Casey McCallum Rice South Shore Funeral Home, 30 Nelson Avenue, Staten Island, NY 10308. A funeral service will occur Wednesday, April 7, 2021 from 10:00 AM to 11:00 AM at St. Clare Church, 110 Nelson Ave, Staten Island, NY 10308. A committal service will occur Wednesday, April 7, 2021 from 11:15 AM to 11:30 AM at Resurrection Cemetery, 361 Sharrott Avenue, Staten Island, NY 10309.
In lieu of flowers, the family has requested donations to the charity of your choice would be appreciated.

Casey McCallum Rice South Shore Funeral Home
30 Nelson Ave.
Staten Island, N.Y. 10308
(718) 317-7600
Published by Staten Island Advance on Apr. 4, 2021.
MEMORIAL EVENTS
Apr
6
Visitation
4:00p.m. - 8:00p.m.
Casey McCallum Rice South Shore Funeral Home
30 Nelson Avenue, Staten Island, NY
Apr
7
Funeral service
10:00a.m. - 11:00a.m.
St. Clare Church
110 Nelson Ave, Staten Island, NY
Apr
7
Committal
11:15a.m. - 11:30a.m.
Resurrection Cemetery
361 Sharrott Avenue, Staten Island, NY
Funeral services provided by:
Casey McCallum Rice South Shore Funeral Home
MAKE A DONATION
Please consider a donation as requested by the family.
MEMORIES & CONDOLENCES
Sponsored by Casey McCallum Rice South Shore Funeral Home.
1 Entry
My condolences to the McCool family, on the passing of Evelyn McCool. My thoughts and prayers are with you all. The only solace I can draw from her passing, is knowing that she is in paradise this night, reunited with her husband Joe. I was the regular mailman to their home on Robinson Ave {1972-2003} I also worked along side her husband Joe at the Postal Service. during many of those same years. I remember many fine encounters with her, during the course of my daily delivery duties. I remember the trip Evelyn and Joe took to Ireland, just prior to Joe's passing. What a blessing that trip must've been for both of them. She was a a remarkable woman, a devoted wife and mother. She also found time for any neighbor in need. May she rest in peace and may her soul be at "God's Right Hand" this night.
Patrick Daly
Acquaintance
April 6, 2021
Showing 1 - 1 of 1 results