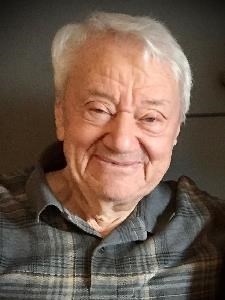 FUNERAL HOME
Casey Funeral Home
350 Slosson Ave
Staten Island, NY
Renato Ascolese 'Kind and generous,' he was happiest in the company of his family Renato Ascolese, 97, a resident of Staten Island for 44 years, passed away on July 3rd from cancer surrounded by his family. At the time, he was a resident of Parlin, NJ, where he moved to in December. Ray was born in Brooklyn and served in WWII in the Army Air Corps in the Pacific Theater. After a brief period working for the US Postal Service, he began his career as a NYC policeman. He retired as a Sergeant at Motorcycle 2. In 1968, he started a second career and became a New York State Uniformed Court Officer and retired in 1993 as a NYS Court Clerk. Known for his quick wit and sense of humor, he was happiest in the company of his family. He enjoyed traveling with his wife Florrie and entertaining friends and family. In retirement, he enjoyed exercising at the Broadway YMCA, playing tennis, and reading. His kindness, generosity, and good nature will be missed by those who knew him. He is survived by his wife of 72 years, Florrie, his son, Steve (wife Sue), and daughter, Anita Proctor (husband Bob) and his grandchildren, Andy, ( wife Brandi,) Pete, and Gina and many nieces, nephews, and second cousins. Burial will be private. In lieu of flowers the family prefers donations to be made in Ray's honor to Tunnel to Towers (t2t.org) or the Healing Journey Foundation (lancastercancercenter.com) Casey Funeral Home 350 Slosson Avenue Staten Island, NY 10314 (718) 447-4242
To plant trees in memory, please visit our Sympathy Store.
Published by Staten Island Advance from Jul. 6 to Jul. 7, 2021.
MEMORIAL EVENTS
No memorial events are currently scheduled.
To offer your sympathy during this difficult time, you can now have memorial trees planted in a National Forest in memory of your loved one.
Funeral services provided by:
Casey Funeral Home
MAKE A DONATION
MEMORIES & CONDOLENCES
Sponsored by Casey Funeral Home.
3 Entries
Dear Flo & family, Please accept my sincere condolences for the passing of Ray. I don't know if you remember me, i used to do your hair & often cut Rays as well. He will be surely missed, he always was so pleasant and always had a smile on his face. You both complimented each other, a wonderful couple. You and your family are in my thoughts and prayers, may God Bless you all. Linda
Linda Bonanno
July 20, 2021
Ray was a wonderful person who always had a smile and a kind word. I always looked forward to seeing him. I will remember him fondly, especially his joy of life and his love of family. My deepest condolences to the family.
Harriet Friedman-Wilson
July 8, 2021
Ray was like sunshine at the YMCA. Always happy and smiling. He spoke so beautifully of his wife and family. He is precious in God's sight.
Barbara
July 6, 2021
Showing 1 - 3 of 3 results