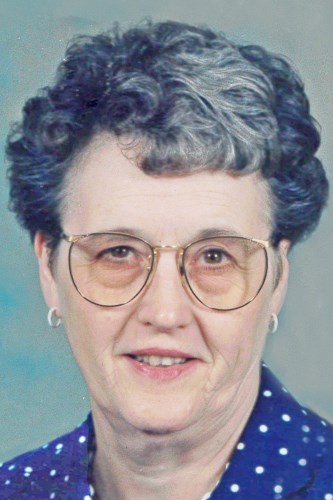 Services will be held at 10 a.m. on Friday at Morningside Lutheran Church (700 South Martha St.) with the Reverend Tom LoVan officiating. Interment will be in Riverside Cemetery in Akron, Iowa. Visitation will be from 4 to 8 p.m. on Thursday, the family will be present from 6 to 8 p.m. with a prayer service at 7 p.m., at Christy Smith Larkin Chapel (2320 Outer Drive). Online condolences may be made to the family at www.chirstysmith.com.

Adele was born Nov. 4, 1936, in Hinton, Iowa, to Arthur and Louise (Doyen) Rozell. She grew up near Akron, graduating from Akron High School in 1955. She married LaRue B Hansen, on July 8, 1955, in Akron at Trinity Lutheran Church. The couple lived in Long Beach, Calif., while LaRue was serving in the Navy. Upon his honorable discharge, the couple returned to the Hawarden, Iowa, area, where he worked for a local farmer for several years, near Brunsville, Iowa.

The couple later moved to Sioux City where she worked for the Woodbury Bank, later becoming First National Bank as a teller/loan officer. Adele later worked for Hawkeye Bank/Morningside Bank and Trust. In the early 80s she worked in the business office of Morningside College, until 1990 when she went to work for the Jones Eye Clinic, finally retiring in 2009.

Adele was a member of Morningside Lutheran Church; she belonged to the ladies' circle, served on the funeral lunch committee as well as a Sunday school and Bible school teacher for many years. Her hobbies included, gardening, dancing, playing cards with friends on Friday nights, spending time with family at Lake Sarah in Minnesota, and family time in Iowa.

Memorials may be directed to Morningside Lutheran Church.

To plant trees in memory, please visit our Sympathy Store.
Published by Sioux City Journal on Apr. 22, 2021.
MEMORIAL EVENTS
Apr
23
Funeral
10:00a.m.
Morningside Lutheran Church
700 So. Martha St., Sioux, Iowa 51106
Funeral services provided by:
Christy-Smith Funeral Homes - Larkin Chapel
MAKE A DONATION
MEMORIES & CONDOLENCES
Sponsored by Christy-Smith Funeral Homes - Larkin Chapel.
1 Entry
PAM I AM SORRY FOR LOSING YOUR PARENTS I HOPE YOU CAN BE A STRONG SURVIVING STRONG PERSON SO HANG IN THERE PAM AND DONT LOOK BACK TO THE PAST LOOK TO THE FUTURE ,,GOOD LUCK IN YOUR JOB AND YOU CAN ALWAYS THINK ABOUT THE GOOD TIMES YOU HAD WITH THE BOTH OF THEM
TAMARA OLUND
April 23, 2021