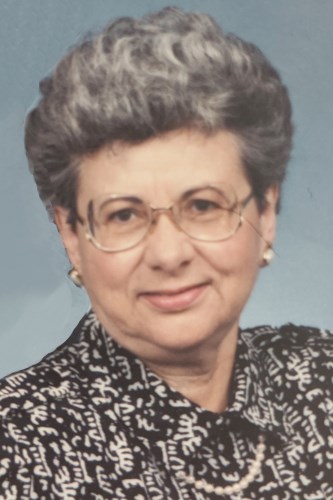 Bernice Elizabeth Spink of Sioux City, passed away peacefully early Saturday morning, April 4, 2020, at the age of 95, at a local care center following a brief illness.

Celebration of Life services will be held at 11 a.m. with a visitation one hour prior to service time on Saturday at Westminster Presbyterian Church at 2915 Glenn Avenue. Inurnment will be held at 1 p.m. on Monday at Memorial Park Cemetery.

Bernice was born on Feb. 16, 1925, in Lawton, lowa, to Russell and Susie (Moyse) Horton. Bernice graduated from Lawton High School with the class of 1942 as Valedictorian.

Bernice married Arthur John Spink on Nov. 8, 1942, in Neosho, Mo. Arthur received his orders that his unit was being shipped overseas to the Pacific Island during WWII. Bernice went back home to Lawton to be with her family during the war.

Bernice and Arthur raised three children, a son born while he was overseas in 1943 and two daughters came later on. Bernice was a stay-at-home mom until they moved to Sioux City from Bronson, lowa. Bernice started working at IPS as a Key Puncher and then after several years, she went to work at City Hall in Data Processing Dept. and in Water Billing Dept. She retired with 25 years there.

Bernice was an active member of Westminster Presbyterian Church where she served as a Deacon and was a member of Women's Circle and Cutters group. She loved getting out and going camping was a new adventure and seeing new places with their 5th Wheel camper. Bernice also loved going to Omaha to spend a weekend shopping at the Malls before Cheryl moved to Arizona. The best times were family times just being together and sharing special times with all of us together.

Memorial Donations can be directed to Westminster Presbyterian Church at 2915 Glenn Ave. or Hospice of Siouxland at 309 Cook Street, Sioux City, IA 51103.

Mom will be happy to have her family with her again, especially Arthur and Danny! I know in my heart Mom is at Peace, and we will see you again, Mom.

To plant trees in memory, please visit our Sympathy Store.
Published by Sioux City Journal on Jun. 10, 2021.
MEMORIAL EVENTS
Jun
12
Visitation
10:00a.m. - 11:00a.m.
Westminster Presbyterian Church
2915 Glenn Ave, Sioux, IA
Jun
12
Memorial service
11:00a.m.
Westminster Presbyterian Church
2915 Glenn Ave, Sioux, IA
Jun
14
Graveside service
1:00p.m.
Memorial Park Cemetery
6605 Morningside Ave, Sioux, IA
MAKE A DONATION
MEMORIES & CONDOLENCES
2 Entries
Vicky and Cheryl , I am sorry to hear about the loss of your mother. I remember her fondly and we were neighbors when we were growing up. My mom knew her well from being active in church. Take care.
Darla Peterson
June 10, 2021
Mike and family you have my sympathy,& prayers in the loss of your Grandmother,mother,friend. Danny will be happy to have her with him. Hugs. Wanda Ingalls
Wanda Ingalls
Other
June 10, 2021
Showing 1 - 2 of 2 results