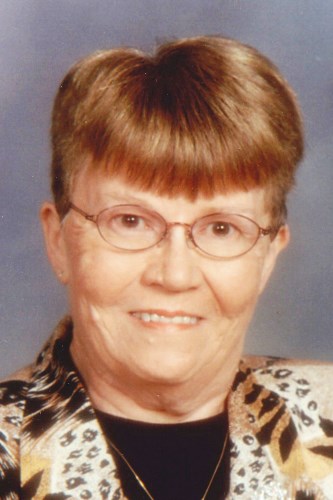 Visitation will be 4 to 7 p.m. Friday at Mohr & Becker Hunt Funeral Home. Private family burial will be in Dakota City Cemetery. Online condolences may be made to www.meyerbroschapels.com.

Charlotte was born on July 7, 1936, in Dakota City, to Don and Iva Mae (Hoffman) Ross. She graduated high school and went on to attend Wayne State College in Wayne, Neb., where she received a teaching degree.

She was united in marriage to Robert Doenhoefer on Nov. 24, 1957. He preceded her in death in 1985. Charlotte worked as a secretary for the Dakota County Treasurer for 25 years.

She was very involved in the American Legion and Veterans of Foreign Wars. She was also a volunteer at the Sioux City Police Department. She enjoyed reading, cooking, and spending time with her grandchildren. Charlotte was also an active member of Dakota City United Methodist Church.

She was preceded in death by her parents; husband, Robert; son, Donald Doenhoefer; and a brother, Roger Ross.

Memorials may be directed to the family.

To plant trees in memory, please visit our Sympathy Store.
Published by Sioux City Journal on Oct. 28, 2020.
MEMORIAL EVENTS
Oct
30
Visitation
4:00p.m. - 7:00p.m.
Mohr & Becker Hunt Funeral Home
GUEST BOOK
3 Entries
Sorry to hear about my dear friend Char. We enjoyed each other´s company thru the years. She stood up for my husband Wayne and I when we were married In 1956. Many memories were shared thru the years.!
Jeanette jans
November 6, 2020
Rodney, I´m so sorry for your loss. Thoughts to you and your family.
Sue Gerow
October 30, 2020
My thoughts and prayers are with you all .
Kathy Hansen
October 28, 2020