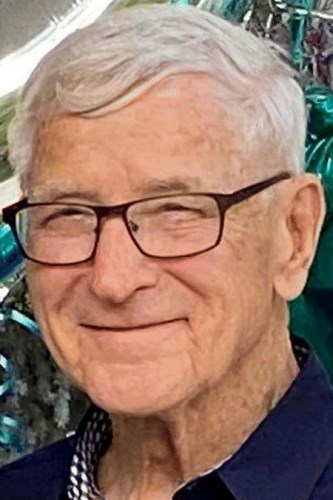 Jerry was born in 1930 to Grace and Lionel Stone in Sioux City. He was a child of the Depression. Some of his first jobs were hoeing corn and butchering hogs. Hard work, delayed gratification and being careful with money were lessons learned.

After graduation from East High in 1948, he enrolled in the University of Iowa. There he met the love of his life, the vivacious Vivian I. Seleen. They married in 1953, raised four boys and enjoyed 56 years of marriage.

ROTC helped Jerry make it through school on a shoestring budget. He graduated with a BA in General Science in 1953. During his Army service, Viv and Jerry were stationed in England and enjoyed seeing a bit of the world.

They returned to the University of Iowa, and Jerry earned a MS in Geology in 1958. Working for Panhandle Eastern/Anadarko was the start of a long successful career in oil and gas. Developing an Uinta Basin prospect with his partner, Jim Anderson was the capstone of a rich, rewarding life's work. He was widowed in 2010.

He loved, was loved, found some oil and gas, waltzed with Viv, traveled, grew beautiful flowers and caught some big fish. RIP, Jerry Stone, you will be missed.

He is survived by his sister, Theresa; his sons, Erik (Barb), Andy (Darlene), Dan (Sue), and Adam; and his grandchildren, Kevin, Brian, Megan, Nathan and Caitlin.

He was preceded in death by his parents, Grace and Lionel; his wife, Vivian; his sister, Wanda; and his brother, Gordon.

In lieu of flowers, donations can be made to Tennyson Center for Children and The Denver Hospice.

Visit HoranCares.com to offer condolences or share a memory.