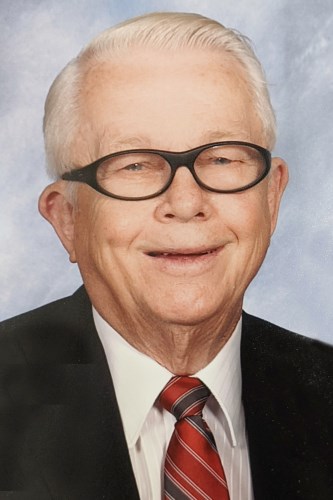 John's body was cremated and will join his wife, Rosemarie, at the National Cemetery in Arlington, Va., where her ashes were interred. A memorial mass will be held at 10:30 a.m. on Wednesday at St. Teresa of Calcutta Catholic Parish in Dakota Dunes with a visitation one hour prior to service time. The service will be livestreamed at https://youtu.be/u4N8GQEQVfg. Arrangements are under the direction of Meyer Brothers Colonial Chapel. Online condolences can be expressed at www.meyerbroschapels.com.

John was born on Nov. 24, 1926, in Omaha, Neb., to Agnes (Tighe) and Joseph A. Huse of Herman, Neb. He attended a one-room country school outside Glenwood, Iowa, finishing grade school at St. Catherine's Academy in Jackson, Neb., and graduating from Hubbard High School in 1944. He immediately enlisted in the US Navy in WWII. After his discharge from the US Navy in February 1947 John attended Creighton University and graduated from the University of Nebraska in 1951. He farmed for a brief time near Jackson until joining the AC Spark Plug division of General Motors in Milwaukee Wisconsin.

He was a Field Engineer for fighter and bomber aircraft airborne weapon systems. His stateside field assignments included Boeing Aircraft Company in Wichita, Kan., and many Air Force and Air National Guard bases throughout the United States. A year at Fairbanks, Alaska, airbases was followed by two years at bases in Korea, Japan, and Formosa with a final assignment servicing aircraft at Williams AF base in Phoenix, Ariz.

In 1958 John was assigned to Vandenberg AFB, California for testing of the Thor Intermediate Range Ballistic Missile guidance system. It is there that he met and became engaged to Miss Rosemarie Kuszewski, a nurse transplanted from Milwaukee and working in California. They married in Milwaukee on Nov. 29, 1958. The couple took up residency in England where John was named head of the field-training unit deployed to train RAF personnel on the maintenance and use of the Thor Missile.

Returning to Milwaukee in late 1959 John was associated with the Titan II ICBM's being deployed throughout the Midwest and Southwest during the "Cold War." His final Aerospace assignment was to the Titan III Missile launch system used for the launching of AF Satellites from Cape Kennedy in Florida.

In 1972 John was transferred to Delco Electronics division of GM in Kokomo Indiana where he worked in Plant Maintenance and Engineering assignments until his retirement in 1982. He continued his affiliation with GM conducting seminars as a national instructor for GM's Corporate Educational and Training Staff. During this period the couple were full time RVers based in Florida living in a 40 foot Kountry-Aire fifth wheel traveling the US and Canada.

In 1987 the couple moved to Pahrump, Nev., where John helped form and finance a land and home development company. He became an owner and licensed Nevada Real Estate Salesman and mobile home dealer. Retiring from these activities in the 1990s the couple moved to Sun City, Ariz., and later to North Sioux City. Eventually they moved to Trinity Heights in Sioux City where John was a volunteer in the ground maintenance of the Sioux City Shrine. As time passed, they moved to North Sioux city to live until the passing of Rosemarie in 2017. John eventually moved to Holy Spirit Retirement community and lived there until his death.

John served in the active Naval Reserve for 8 years receiving his Honorable Discharge in 1955. He was a regular volunteer for the Experimental Aircraft Association "AirVenture" annual get together in Oshkosh, Wis. John was a charter member of St. Teresa of Calcutta Catholic Parish in Dakota Dunes where he served as Lector, Eucharist Minister, and on various committees. Prior to the establishment of the parish he has been a member of Sacred Heart and St. Peters in Jefferson, S.D.

He was a member and officer of the Knights of Columbus Council 11315 of Jefferson. He belonged to the American Legion Post 500, EAA Chapter 291 and the South Sioux City Flying Club. John was also a lifetime member of the Good Sam RV Club, a member of the Coast to Coast Camping Club, the Excel Trailer Club of South Dakota and the President's Travel Club.

He was a multiple gallon blood donor and cancer survivor.

He is survived by his daughter, Sandra Huse, of Los Angeles, Calif.; son, John J. Huse II, of Scottsdale, Ariz.; and numerous nieces and nephews.

He is preceded in death by his wife, Rosemarie; parents Agnes and Joseph; sister Honore; and brother Edgar with wife Mary.

It was John's wish to have no flowers, but that any donations be made payable to Blessed Teresa Church Building fund.