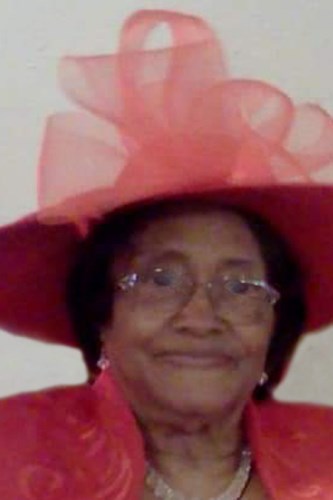 Missionary Evangelist Mother Lillie Grace Naylor, 94, of Sioux City, passed away early in the morning on July 23, 2021, at a local hospital following a lengthy illness.

A family-led memorial service will be held Friday, July 30, 2021 at 6:30 p.m. at the Tabernacle Church of God in Christ. The family requests masks be worn. A Funeral will be 10 a.m. Saturday at Mt. Zion Missionary Baptist Church, 1421 Geneva Street, Sioux City, Iowa, 51103. Burial will follow in Graceland Park Cemetery. Visitation will begin one hour prior to the service. Christy-Smith Funeral Homes is handling the arrangements. The family requests masks be worn. Online condolences can be left for the family a www.christysmith.com.

Lillie Grace Naylor was born March 12, 1927, to the late Annie Ruth Johnson and Tommie Evans, in Cromwell, Ala. At a very young age, God spoke to Lillie's mother letting her know Lillie was very special and had a Godly calling on her life. In 1953, she moved to South Sioux City, where she attended First Baptist Church; after which, she moved to Sioux City and joined Mount Olive Baptist Church.

Mother Naylor gave her life to the Lord and accepted her calling in 1960. In 1966, she formed a gospel group called "The Gospel Echoes." They debuted on a new radio station called K.T.F.C. Radio. In July of 1966, she founded Tabernacle Holiness Church along with her husband, George, which later merged with the Church of God In Christ.

She served as a District Missionary in the W.D. Smith District in Des Moines for 10 years. She hosted a tent revival for 12 years in Sioux City. She traveled to many states evangelizing. She Evangelized on the reservation in Macy, Neb. as well.

Mother Naylor enjoyed fundraising for the church, selling concessions at the Rivercade, The Culture Fair, and The Sioux City Indian Center, to name a few. She started a food pantry, and offered free meals to many families in need.

She received her GED, and later worked for Western Iowa Tech. She attended the University of South Dakota from 1974-1975. She received a Notary Public License to work in the State of Iowa.

She had a love for people visiting nursing homes, praying for the sick, and helping anyway she could. Through this, many refer to her as "Mother" "Mom" "Granny" and "Grandma." In her spare time, she enjoyed fishing, watching Jimmy Swaggart and WWE Wrestling with her loving husband, who she called "Boo."

Mother Naylor has received many awards and recognitions over the years. In March of 2003, her granddaughters, Felicia Pettiford and La Theia Spikes nominated her for a "Siouxland Women of Excellence Award." She won the "Our Lady of Excellence" Award. She wore many hats when it came to roles, positions, and titles. She also loved to wear many hats and was always dressed well for any occasion.

She was the matriarch of our family, and leaves behind to cherish her memories, her loving and devoted husband of 60 years, George W. Naylor Sr.; sister, Marcile Wolford of St. Louis, Mo.; children, Ann Brown of Sioux City, Thomas Baskin of Denver Colo., Preston Baskin, Clozell Green (Norland), Ronnie Naylor, and Phillip Naylor, all of Sioux City; her adopted daughter, Charlene Tin Cup of Orange, City, Iowa; and adopted son, Richard Baskin. She has 25 grandchildren; 42 great-grandchildren; and 19 great-great-grandchildren

Published by Sioux City Journal from Jul. 27 to Jul. 28, 2021.
To plant trees in memory, please visit our Sympathy Store.
MEMORIAL EVENTS
Jul
30
Memorial service
6:30p.m.
Tabernacle Church of God in Christ
IA
Jul
31
Visitation
9:00a.m. - 10:00a.m.
Mt. Zion Missionary Baptist Church
1421 Geneva St, Sioux, IA
Jul
31
Funeral
10:00a.m.
Mt. Zion Missionary Baptist Church
1421 Geneva St, Sioux, IA
Funeral services provided by:
Christy-Smith Funeral Homes - Morningside Chapel
MAKE A DONATION
MEMORIES & CONDOLENCES
Sponsored by Christy-Smith Funeral Homes - Morningside Chapel.
6 Entries
As a former Pastor of Tabernacle, was saddened to learn of death of beloved Mother Grace Naylor. May God who does all things well extend His comfort to Deacon Naylor, each of the daughters, sons, and loved ones. Praying much for the family and church. MUCH LOVE! Please be blessed in the name of Jesus Christ our Lord. "Precious in the sight of the Lord is the death of his saints." Psalm 116:15
Elder RKD Harris,New YorkCity, New York
July 31, 2021
A truly beautiful woman.
Craig A Brubaker
July 30, 2021
God be with the family in your time of grief. She was a wonderful, powerful woman of God. She will be surely missed.
linda M plummer
Friend
July 28, 2021
We are so sorry to hear about the passing of your wife Lillie Grace Naylor. She will be greatly missed. Rest in peace grandma Grace. We love you grandpa Naylor.
Chris & Jeannie Ellington
July 27, 2021
So sorry for your lost. I knew Sister many year ago she was a lovely. Person
Betty Gray
Friend
July 27, 2021
My prayers are with all of Mother Naylor's family members that the Lord will hold them close during their time of mourning. Mother Naylor taught me many things in my journey while at Tabernacle. God Bless
Shari Hardnett-Stanley
Friend
July 27, 2021
Showing 1 - 6 of 6 results