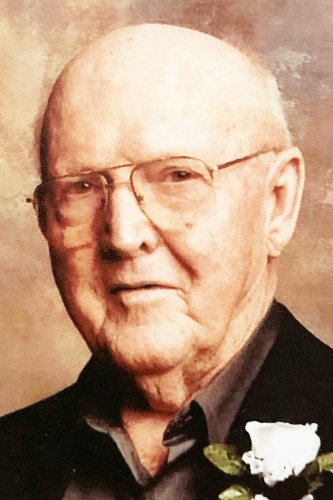 Richard L. Heath, 89, of Anthon, passed away Monday, Nov. 2, 2020, at a Sioux City hospital. He was the longest living Heath family member to date.

Graveside services will be 1:30 p.m., Friday in Mount Saint Joseph Catholic Cemetery, Anthon. The Rev. Karen Handke will officiate. Visitation with no family present will be 4 to 7 p.m. today at Armstrong-Van Houten Funeral Home in Anthon. Due to the COVID-19 Pandemic, masks are encouraged and social distancing rules apply during all services. Condolences may be sent online www.armstrongfuneral.com.

Richard was born on July 31, 1931, on the Heath family farm, to Ralph and Bessie (Ping) Heath. After attending Grant 5 country school and high school in Anthon, Richard proudly joined the U.S. Marine Corps in 1951. He served as a sergeant with the 1st Marine Division traveling with a gun crew and reminisced about traveling at night with no lights. Richard was at the Punch Bowl and Frozen Chosin. He helped build Panmunjom near the 38th parallel, where peace treaty negotiations were conducted.

In addition to serving in Korea, Richard served guard duty for six months in Japan. After serving overseas, Richard served another year at 29 Palms, Calif., returning home on Christmas Eve of 1953. He was later honorably discharged in April 1954. Richard received a Good Conduct Medal with two rows of ribbons for his service to his country. He was a proud member of the American Legion McNiff Post 389 of Anthon for more than 60 years.

On April 7, 1956, Richard married Dolores Green and they were blessed with three daughters and two sons. His family continued to grow with lots of grands and greats which he adored. He always loved having cookies out for whenever they would stop by. In 2009, Dolores passed away. After farming in the Climbing Hill and Anthon area, raising Hereford Shorthorns, he then started driving truck. Richard loved seeing the country and could remember to this day all the highway names and where they were located. He moved to the town of Anthon in 1973 and lived there until moving to an apartment, then to assisted living. He was currently residing at Care Initiatives Correctionville Specialty Care in Correctionville, Iowa.

Richard drove truck for Glasnapp in Lytton, Mapleton Grain Co., Mitchell's and Rodney Grain. He had his own trucking business in the 1980s. He drove for Hirschbach's until 1992. He enjoyed his retirement by driving school bus for Anthon-Oto Maple Valley and Woodbury Central. He loved the students. Richard once drove many miles to Sioux City every day after picking up a student near Climbing Hill. He also drove for ball clubs in Sioux City including the Explorer's, Morningside College baseball team, Briar Cliff basketball girls, Heelan girls, FFA group to Louisville, Ky. and many Maple Valley Anthon Oto state trips. He also drove a tour bus traveling to Canada and for casino players. Richard shared his love of trucking, teaching his son, Brian, to drive truck and his son, Tracy, who works on trucks re-building wrecked semi-trailers.

One of his favorite activities was watching television, especially sports. He didn't have a favorite team but watched the Cowboys, Broncos, Packers, Vikings and sometimes the Cubs and Bulls (mom's favorites) for his family. He enjoyed women's softball and the Little League World Series. The sports Richard loved the most was watching his grandchildren on the court or field.

Another one of his favorites was traveling. His family was all over the United States and he visited them as often as he could, especially his brother, Johnny, and his family in Arizona. He drove to Florida a few times and went fishing with Larry and his buddies. He traveled to North Carolina and Washington D.C. with Lori and several grandchildren.

Richard's happy place was the Siouxloon with Cheryl and the gang spoiling him. He sat up to the bar and drank his coffee chatting with everyone. He also loved to play cards to include euchre and specially cribbage. He was winning until COVID when no one was able to challenge him. He would always ask every day how the Berning Cattle were doing, how much Jake had left to combine, how the Obar was doing, what was happening in Anthon, and if Sarah had her chores done. Richard will be remembered for his sense of humor and his ability to make each day brighter through laughter.

In lieu of flowers, memorials may be directed to the Anthon Rec Ball program, Hamann Memorial Library of Anthon, Iowa, and the American Legion McNiff Post 389 of Anthon.