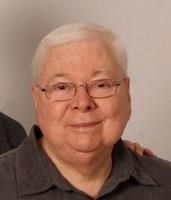 BORN
1941
DIED
2019
FUNERAL HOME
Bisch Funeral Home
2931 South Koke Mill Road
Springfield, IL
Larry F. Elledge 1941 - 2019
Springfield, IL—Larry Francis Elledge, 77, passed away on April 22, 2019, at home after a long battle with pancreatic cancer. He was born on May 22, 1941, in Poplar Bluff, Missouri, to John E. Elledge and Barbara (Dysinger) Elledge. He graduated from Poplar Bluff High School in 1959. He was a 1963 graduate of Arkansas State University, where he was a member of Lambda Chi Alpha fraternity.
On June 29, 1963, he married Ethel Jean Wyatt in Blytheville, Arkansas. They celebrated their 55th wedding anniversary in 2018. She died in July 2018 of bile duct cancer.
After a number of years as a daily newspaper editor, he joined the staff of the Association of Illinois Electric Cooperatives (AIEC). During his career with the AIEC, he received a number of national and state awards for his support of rural electric cooperatives and the cooperative business model. After 30 years with the AIEC, he retired in 2006 as the Assistant to the President/CEO and executive board member.
He is survived by his three daughters: Selena Elledge (Lee Williams) of Springfield, Illinois; Amber Kozhukalo (Eugene) of Issaquah, Washington; and Nicole Pond (Adam), and one granddaughter, Ruby Pond, also of Issaquah, Washington. He is also survived by his brother Bruce (Carol) Elledge of Boyd, Texas, and several nieces and nephews. In addition to his wife, he was preceded in death by his parents and one brother, Paul Elledge of Boyd, Texas.
Larry considered himself to be a "doer of worthwhile and good things." He never took for granted for one second the wonderful life and family he had. He enjoyed years of bridge games and trivia with his wife and friends, St. Louis Cardinals baseball, and winters on the Gulf Coast.
Visitation will be Saturday, May 4, between 2 p.m. and 4 p.m. at Bisch West Funeral Home, 2931 S. Koke Mill Road. A Celebration of Life will follow on Saturday at 4 p.m. In lieu of flowers, please consider a donation to the Lustgarten Foundation for Pancreatic Cancer Research. The family also plans to establish a scholarship in his name at Arkansas State University.
Please visit the online "Life Remembered Story" at www.bischfuneralhomewest.com where tributes and condolences may be left for the family.