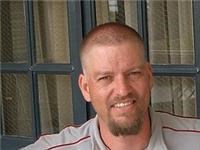 He grew up in Pullman WA, attended Pullman Schools, and graduated from High School in 1989 and WSU in 1994, where he was a member of the Delta Chi fraternity. After several years in Phoenix, AZ Brian moved back to Pullman to be closer to his family.

Brian loved his family, a good steak, a nice glass of wine, sports, dogs, "Blazing Saddles" and the WSU Cougars! Cougar Football season was the best time of year according to Brian. He hated vegetables, rude people, pineapple on his pizza and rom coms.

Noteworthy events in Brian's life included: membership and participation in Boy Scout Troop 460 where he mastered outdoor living skills, living a year in Basel, Switzerland with his family, a three-week trip to Philmont Scout Ranch with visits to several national parks and a 90-mile hike in the rugged mountains of New Mexico.

Halibut fishing near the San Juan Islands and helping to land a 60 pounder. He also helped coach baseball in the Pullman Youth Baseball Association.

Brian is survived by his mother Jane Hayton Riebold (Orrin) of Deary ID, his father William Hayton (Laurence McCulloch) of Mount Vernon WA, a brother Michael Hayton (Jenny) of Pullman, nephews Chase (Hailey) and Drew both of Pullman, stepsisters Carrie Schlecht (Reese) of Placerville CA, and Jamie Smith (Chad) of Bonney Lake WA, numerous aunts, uncles, nephews and nieces, and many friends in his hometown of Pullman and elsewhere.

He is preceded in death by his grandparents on both sides; Emanuel Axelson (Sigma Chi WSU Grad 1934), Grace Larson Axelson, Leroy Hayton & Irene Dickson Hayton, who were from Mount Vernon, and the love of his life, his rescue dog Abby Von Pepperpants. We are confident that they are joyfully reconnecting right now.

A graveside service will be held at the Pullman City Cemetery on Friday April 2, 2021 at 11:00 am.
Donations may be made in Brian's name to Whitman County Humane Society, Pullman High School, the Pullman Fire Department, or the charity of your choice.

Short's Funeral Chapel of Moscow, ID is handling arrangements and condolences may be left at www.shortsfuneralchapel.com
To plant trees in memory, please visit our Sympathy Store.
Published by Skagit Valley Herald from Mar. 26 to Mar. 27, 2021.
MEMORIAL EVENTS
Apr
2
Graveside service
11:00a.m.
Pullman City Cemetery
Funeral services provided by:
Short's Funeral Chapel
MEMORIES & CONDOLENCES
Sponsored by Short's Funeral Chapel.
5 Entries
My heart goes out to Jane and bill. This is heartbreaking . I love you guys. Sincerely, Steve Good
Steve Good
Family
April 1, 2021
Mike and Jenny our condolences to you and your family.
Mike and KC Erp
March 28, 2021
Go Cougs
Taylor
March 28, 2021
Gone way too soon. I am deeply sorry to his family and friends. Sincerely, angie
Angie Schneiderman
March 28, 2021
I am so sorry for this loss. Brian was always full of something when we were all teenagers in school. I am happy to have called him a friend. I am deeply sorry for this loss. My thoughts and prayers to his family. RIP Brian
Stephanie Rodeen-Erickson
March 27, 2021