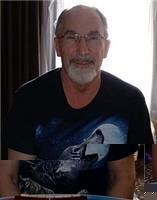 David was a family-oriented man who always wanted to help not only his family but also anyone needing help. He was generous to a fault with a terrific sense of humor and a love of God and Country.
David was born on April 3, 1948 in Vernonia, Oregon to his parents Delbert and Leona Ashford. He was the middle of six siblings.

David spent most of his younger years in Oregon, graduating from Marshfield High School in Coos Bay, Oregon in 1966. David worked in many fields including construction, auto sales, and marketing. He was an ordained minister having attend Ministry School in Texas.

After becoming a minister David worked for Hard Hats for Christ in Washington, D.C. for several years. David relocated to Washington and was semi-retired while working as a car salesman and eventually a mobile notary. During his retirement he met and married Beatrice Nelson in August, 2014.

David was an avid fisherman and hunter and enjoyed spending time with friends and family on these adventures.

David was preceded in death by his parents, Leona (deceased 1989) and Delbert (deceased 2000) and his younger brother, Marvin (deceased 2020).