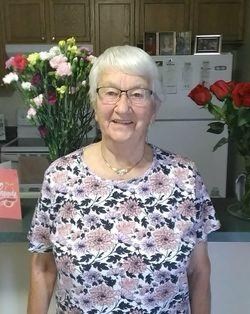 BORN
1927
DIED
2021
Mount Vernon - On Wednesday, July 14, 2021, twelve days before her 94th birthday, Grace Oosterhof passed away peacefully at home in Mount Vernon with family by her side.

Born Margarethe (Gretel) Ann Vit in Vienna, Austria to Hans Johann and Karolina (Mercsanitz) Vit. She was raised on the family farm with her two brothers Johann and Josef. Amidst the hardships of WWII, she met and fell in love with a young Dutchman hired to work on the family farm named Alco (Al) Oosterhof. They were married in Austria on May 14, 1945.

Gretel and Al tried to move to the Netherlands in late 1946, but were intercepted by the German Army and forced to live and work in a displaced persons camp in Germany, where their first son, Peter was born. After living in this camp in Germany for over a year, they were finally able to escape in the middle of the night, traveling over a frozen canal that bordered the Netherlands, and made it back to Al's family farm in Winsum, Groningen. Here they had two more children, Carolina in 1948 and Ina in 1953.

In 1959 they decided to immigrate to the United States; they settled and remained in the Skagit Valley the rest of their lives. Here they also gave birth to their youngest son, Alco Jr. When Gretel became a U.S. citizen, she changed her name to Grace.

Grace raised her four children while also working as a food server with the Elks Club and a private housekeeper. She enjoyed her weekly ladies knitting club with her close friends, Betty, Tina, Alice and Nelli. Grace loved dancing and listening to music at the Silvana Grange and Elks Club. Grace and Al regularly traveled back to Europe to visit family in Austria and the Netherlands and in their later years, enjoyed traveling in their motorhome during the winter months to the warmer climates of San Felipe, San Diego and Palm Springs.

Most of all, Grace loved being an Oma; spending time with her grandchildren and great grandchildren. She was so welcoming and would always offer a great cup of coffee, Dutch Boterkoek, speculaas cookies or any other treat she could come up with. One simply could not leave Grace's home hungry or empty handed.

Al and Grace were married for 61 years, until Al's death in 2006. Grace was also preceded in death by her parents, brothers, and her daughter Ina.

The family would like to thank Hospice of the Northwest and all others that cared for Grace during her final days.

A celebration of life will take place at a later date, to be announced.
Published by Skagit Valley Herald from Jul. 25 to Jul. 26, 2021.
To plant trees in memory, please visit the Sympathy Store.
MEMORIAL EVENTS
To offer your sympathy during this difficult time, you can now have memorial trees planted in a National Forest in memory of your loved one.
MAKE A DONATION
MEMORIES & CONDOLENCES
3 Entries
So sorry to here of Grace´s passing. I work at food pavilion and got to know grace when she came into the store, she always came over to say hello which always ended being a nice visit. The last time I saw her she came into the Sedro Woolley store looking for Dutch products which was a very nice surprise as I hadn´t seen her since I worked in mount vernon. She always asked how Sid was doing. He was married to my mother, Jean DeBoer
Kathy Whitehead
August 30, 2021
My sincere condolences. I found out today that Greetje had passed away from my cousin Ed Brands in Sussex, New Jersey. She was a great lady.
Hilda Tel-Brands, Guelph, Ontario, Canada.
Family
August 1, 2021
Our thought and prayers go out to the family. Grace was a special lady, very kind gentle person! She will be greatly missed. One thing I can share the person she was... her daughter Carol and I were close friends in high school. I spent a lot of time at there home. Grace treated me like I was one of her children. I was never a visitor. Carol and I have remained friends for 58 yrs. So thankful for her friendship and knowing lovely Grace was a blessing. May the family find Peace and comfort in the memories of Grace that will be with you always
Walter &Linda Gifford
Friend
July 26, 2021
Showing 1 - 3 of 3 results