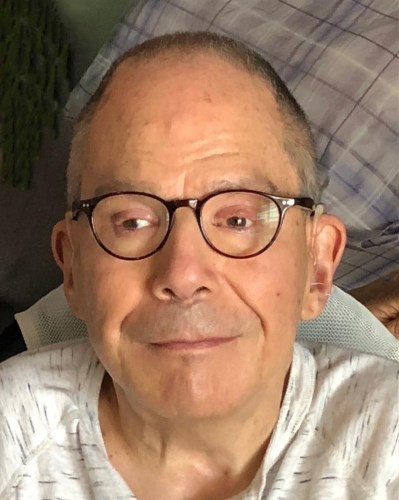 Patrick was born to Edward Allen Smith and Ann Theresa Smith September 12, 1950, in Burlington, WA. He attended Burlington Edison High School and after graduation he was employed by "New Leaf" an organization that provides training, life skills and residential services to elevate confidence, Independence and self-sufficiency for people with disabilities. He excelled and was soon elevated to Team Leader overseeing different projects. Always personable and well respected by his colleagues.

Patrick lived at home in Burlington with his mother until 1989. He then moved to Guemes Island where Herb and Sally have a Yak Farm on acreage. He thrived living in the country with Herb and Sally's various animals: dogs, Yaks, goats and chickens, etc. And then in 2015 he began a new adventure and moved to Sun City, AZ to live with Tom and Dawn.

Patrick was an avid sports fan. He didn't care what kind of game was on, football, baseball, hockey, etc. he was "In"! He was also competent on computers and many times he assisted all of us when we had trouble concerning a computer problem. He was willing and generous to all.

Patrick had a magic touch when it came to animals. They were drawn to him and showered him with Love. He had such a gentle energy that they sensed.

Patrick will forever be missed by all who knew and Loved him.

A private funeral service to be held at Burlington's Cemetery on Friday July 23, 2021, where he will lie next to his parents for eternity. To share memories of Patrick please visit: www.evanschapel.com/obituary/patrick-smith
Published by Skagit Valley Herald from Jul. 25 to Jul. 26, 2021.
To plant trees in memory, please visit the Sympathy Store.
MEMORIAL EVENTS
To offer your sympathy during this difficult time, you can now have memorial trees planted in a National Forest in memory of your loved one.
Funeral services provided by:
Evans Funeral Chapel - Anacortes
MAKE A DONATION
MEMORIES & CONDOLENCES
Sponsored by Evans Funeral Chapel - Anacortes.
0 Entries
Be the first to post a memory or condolences.