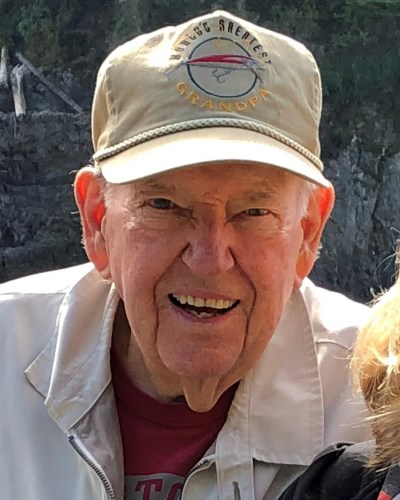 BORN
1928
DIED
2021
FUNERAL HOME
Hawthorne Funeral Home - Mount Vernon
1825 E. College Way
Mount Vernon, WA
Mount Vernon - Richard M. McKinley (93) went to be with the lord and his beloved wife Ammie on July 9th, 2021. He was born on May 26th, 1928 in Dodgeville, WI. In January 1946 he enlisted in the US Navy where he served for 22 years. While in the Navy he met and married Ammie on August 6th, 1954. They enjoyed their military life living in many different states and making lasting friends along the way.

In October 1966, Mac retired from the Navy and went to work for Seafirst Bank in Mount Vernon until July 1978. He and Ammie spent 11 wonderful summers at their cabin in Northern B.C.. Mac's passion was fishing and camping in the great outdoors.

At his request a private graveside service was held with his family. In Lieu of flowers, please consider a donation to St. Jude Children's Hospital.

Published by Skagit Valley Herald from Jul. 18 to Jul. 19, 2021.
To plant trees in memory, please visit the Sympathy Store.
MEMORIAL EVENTS
To offer your sympathy during this difficult time, you can now have memorial trees planted in a National Forest in memory of your loved one.
Funeral services provided by:
Hawthorne Funeral Home - Mount Vernon
MAKE A DONATION
MEMORIES & CONDOLENCES
Sponsored by Hawthorne Funeral Home - Mount Vernon.
1 Entry
my condolences to the McKinley family, especially Michael and Lisa. Two kids i grew up with in our neighborhood just a couple houses down so many years ago.Your father was a kind very mellow man, and your mother a saint. so many memories, all good and wonderful to recall. kids im still in the neighborhood, come by some time. i'd love the visit.god bless you all....zed
joel zediker
July 18, 2021
Showing 1 - 1 of 1 results