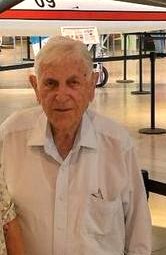 Born in 1927, he and his family survived the Depression by raising their food in downtown Bladensburg, Maryland.

Graduate of Bladensburg High at the age of 16 he immediately went to work in the Fingerprint Section of the FBI in downtown Washington, DC.

It was there where he met the love of his life, Wanda.

Russell joined the Navy at 17 and was stationed at Bainbridge, MD. While preparing to be shipped to the Pacific the US dropped the bombs that ended the war. Mustered out of the service he went to Benjamin Franklin University at night on the GI Bill and obtained a Business Administration Degree.

He married Wanda Miller in July of 1947 and remained married until her death in 2018.

Taking over the family business in 1956, W. B. Maske Sheet Metal Works flourished for many years, which was a leader in the Roofing and HVAC in the entire Washington Area in both the commercial and residential markets. At one time he and his brother Bill employed as many as 80 employees.

Russell was devoted to giving back to his community his entire life. He was President of the Jaycees as a young man. Past President and charter member of the Bladensburg Rotary Club. He served under the Larry Hogan, Sr. Administration as a Zoning Chief he was head of the Republican party in Prince George's County. and was a Charter President of the Bladensburg Local Development Council. A proud lifelong Bladensburg boy. He maintained the family business there until it closed in 2013.

He had a summer place in Coltons Point, Maryland and that was he peaceful retreat. He was most at peace with a fishing rod in hand sailing around in his boat or swinging a golf club. A lifelong member of St. Luke's Episcopal Church, he enjoyed the fellowship of the church and was active in leadership and fundraising for the Church. He continued on to see the Church's conversion to becoming St. Luke's Catholic Parish.

After retiring in 2014 he moved down to Southern Maryland to spend his final years with his beloved wife Wanda watching glorious sunsets until her death in February 2018. He cherished his family, friends, and employees, he devoted himself to always provide for them.

Without his lifelong partner, he took a turn and moved to an assisted living facility where he was greatly appreciated by the staff and residents alike.

Dementia slowly took hold and times of brief recognition were few and far between. On his last visit with his son Larry, he recognized him and grabbed his hand it's as if he was telling us, he was ready to be reunited with Wanda in glory.

He is predeceased by his parents William B. and Sara Maske, his son Russell Jr. and his wife Wanda. He is survived by his son Lawrence, daughter in law Patrice.

A graveside service will be held April 17 at Fort Lincoln Cemetery in Bladensburg, Maryland. A celebration of life will be held for family and friends in the summer.
Published by The Enterprise on Apr. 13, 2021.
To plant trees in memory, please visit the Sympathy Store.
MEMORIAL EVENTS
Apr
17
Graveside service
Fort Lincoln Cemetery
Bladensburg, MD
Funeral services provided by:
Gasch's Funeral Home, P.A.
MAKE A DONATION
MEMORIES & CONDOLENCES
Sponsored by Gasch's Funeral Home, P.A..
0 Entries
Be the first to post a memory or condolences.