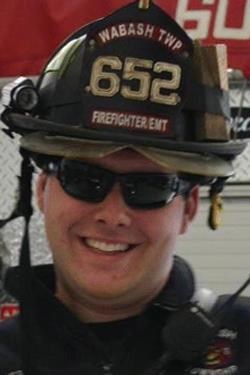 Kevin J. McCombs, 34, son of William (deceased) and Anita (Mersits) McCombs of South Bend, passed away Sunday, February 28, 2021 in Benton County, Indiana. Kevin was a man of many hats and he accomplished many things in his short time with us. In 2003, as a senior at St Joseph's High School, he graduated from the Clay Volunteer Fire Department Academy. In 2004, Kevin then graduated from St. Joseph's High School. He continued on at Clay Fire, while also working as a St. Joseph County Dispatcher, until he moved to West Lafayette to attend Purdue University. Kevin immediately joined The Wabash Township Fire Department and Purdue University Rescue Squad.

While serving at Wabash Township Fire Department, Kevin served as station resident, Public Information Officer, Sergeant, and Assistant Chief. In 2011 Kevin graduated from Purdue University with a degree in Aviation Technology and started working for Tippecanoe County Emergency Ambulance Service (T.E.A.S.). While working for T.E.A.S. Kevin put himself through Paramedic school. After obtaining his license, Kevin left T.E.A.S. in 2014 and began working as a Paramedic for Benton County EMS.

In 2019 he began serving the town of Boswell, as Town Marshall. Kevin graduated the Indiana Law Enforcement Academy Tier 2 and attended numerous police trainings including drug interdiction, cyber security, and interrogation. He continued to work as a Paramedic with Benton County EMS, a Reserve Deputy with the Benton County Sheriff's Department, and a Public Information Officer for the Indiana District 4 Task Force. In 2020, Kevin joined the Boswell Fire Department as well.

In his limited free time, Kevin taught himself to be a DJ and earned a job with Rat Pack Mobile DJs in 2013. He worked for Rat Pak performing at countless weddings, college events, and dances in between shifts at the fire department and police station.

Kevin had a passion for flying since high school when he started taking lessons to obtain his private pilot's license. While at Purdue, Kevin joined the Lafayette Composite Squadron of the Civil Air Patrol as a mission pilot. He served in both search and rescue and flight operations. Kevin went on to get his helicopter pilot's license after that. Kevin was preceded in death by his father, William J. McCombs and paternal grandparents, James and Betty (Brown) McCombs. He is survived by his mother, Anita M. McCombs, brother, Joseph McCombs (Lindsey); and maternal grandparents, Anthony and Helen Mersits. Also surviving are his uncles, Anthony Mersits (Melissa) and John Mersits; aunts, Mary Larkins (Lee) and Lois Rehrer (Doug); cousins, Aaron (Nichole) Rehrer, Brittany Rehrer, Katelyn Mersits (Mike), and Meredith Mersits, as well as several other loving relatives.

Memorial contributions made in Kevin's name to Zahoran Funeral Home will be used to provide wellness screenings for first responders in Indiana. Zahoran Funeral home has been entrusted to handle arrangements.

To leave an online condolence, visit our website, www.zahoran.com or our Facebook page, Zahoran Funeral Home. For those unable to attend, a live stream of the funeral can be found at StPius.net or facebook.com/StPiusGranger.

Published by South Bend Tribune on Mar. 5, 2021.
To plant trees in memory, please visit the Sympathy Store.
MEMORIAL EVENTS
Mar
5
Visitation
1:30p.m. - 4:00p.m.
St. Pius X Church
52553 Fir Rd., Granger, IN
Mar
5
Funeral Mass
4:00p.m.
St. Pius X Church
IN
Funeral services provided by:
Zahoran Funeral Home - South Bend
MAKE A DONATION
MEMORIES & CONDOLENCES
Sponsored by Zahoran Funeral Home - South Bend.
5 Entries
May God bless you and your family in this time of sorrow.
Susan Morlock-Garman
Friend
March 8, 2021
I enjoyed my time flying with Kevin in the Civil Air Patrol. I'll share a humorous moment I shared with Kevin. I flew the CAP plane the next day after Kevin did. Lets say he tied the airplane down very well. So well it took me an hour to untie the airplane. When I questioned his technique he smiled and said "if you can not tie a knot, tie a lot". I will smile and remember him fondly with that memory.

My sincere condolences to his family.
David McEntire
Friend
March 8, 2021
Anita and Joey....I am more sorry than I can say. My heart and prayers go out to all of you. May you find peace in your memories of him
Ann Sommers
Acquaintance
March 5, 2021
My deepest sympathy to the Mccombs and Mersits families. You are all in my thoughts and prayers.
Linda Markiewicz Schaeper
March 4, 2021
My thoughts and prayer are with the family. I was lucky enough to meet Kevin and work a mutal aid calls with him. Kevin was a guy with many talents and a person you could always ask for help from! Kevin lived a good life! God speed brother may you rest easy now. You will be missed by many. David Hutsell Sta 7 Michigantown Ind.
David Hutsell
March 4, 2021
Showing 1 - 5 of 5 results