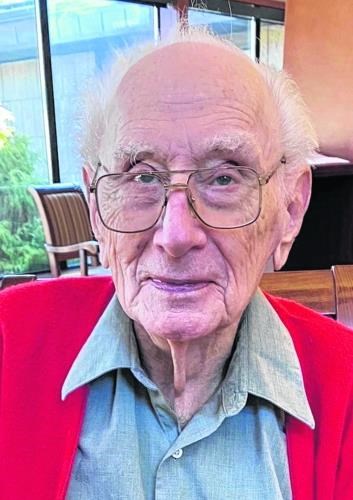 Rev. Ralph Ringenberg, 99, died of complications of COVID-19 on Saturday, December 19, 2020. He spent his last year and a half residing in the independent living wing of Hubbard Hill - Living Wisdom Community, Elkhart, IN. He moved there from his residence in South Bend where he had lived since 1983.

He was born on January 17, 1921 on the family farm in Harlan, IN to Henry and Edna (Zeimer) Ringenberg. He attended school in Harlan and after graduation attended Fort Wayne Bible College, Cleveland Bible Institute (Malone College), and Taylor University.

In 1953 he married Emily Figuly. They were married for over 62 years, and he lovingly cared for her during several years of declining health until her death at their home in 2015. For over seven decades he was a minister with the Missionary Church. He pastored churches in Cleveland, OH; Yoder, IN; East Peoria, IL; Mooresville, IN; South Bend, IN; and Crumstown, IN. He also served as interim pastor at St. Mark Missionary Church for an extended period. He was known for his deep empathy and caring as a pastor.

He was the editor of the denominational magazine, The Missionary Worker, from 1947 to 1951, then continued as an assistant for another year; he edited the historically-oriented book, Believers in the Missionary Church (1976); and he was a long-time faithful member of the Board of the Missionary Church Historical Society, to which he was named emeritus when he could no longer serve actively.

He left an indelible impact and a lasting legacy for his family, his congregations, and his many friends with his strong faith and gentle spirit.

Private graveside services and burial will be at the Sumption Prairie Cemetery in South Bend, IN. A virtual Memorial service will be held January 17, 2021 hosted by St. Mark's Missionary Church. The memorial service will be publicized via the church and Palmer Funeral Home-Guisinger Chapel so people can participate remotely. The service will also be recorded and available to view online. Online condolences can be offered to the family at www.palmerfuneralhomes.com.

In lieu of flowers, contributions can be made to Reach Beyond for Dr. Roy Ringenberg's ministry or to the Ross Ringenberg memorial scholarship at Anabaptist Mennonite Biblical Seminary (AMBS).

Published by South Bend Tribune on Dec. 26, 2020.
To plant trees in memory, please visit the Sympathy Store.
MEMORIAL EVENTS
Jan
17
Memorial service
virtual memorial service
memorial service will be publicized via the church and Palmer Funeral Home-Guisinger Chapel, IN
Funeral services provided by:
Palmer Funeral Homes - Guisinger Chapel
MAKE A DONATION
MEMORIES & CONDOLENCES
Sponsored by Palmer Funeral Homes - Guisinger Chapel Guisinger Chapel.
2 Entries
We are so thankful to have known such sweet neighbors.Our sympathy to the family. It’s nice to know that we will see him someday in Heaven! Love, Arrah & Kevin Snyder
Arrah Snyder
Neighbor
December 31, 2020
He was our 1st pastor at Hillside Missionary church. When my Husband Ron had a heart attack, Pastor Ralph went to visit him, not even knowing him at that time. He was a great influence on our christian walk with the Lord. When Ron passed away in 2019 he came and encouraged me greatly. Always compassionate and loving. He came to visit at our home many times. He will be missed but now Heaven has Him.
Noreen Ingle
Friend
December 28, 2020
Showing 1 - 2 of 2 results